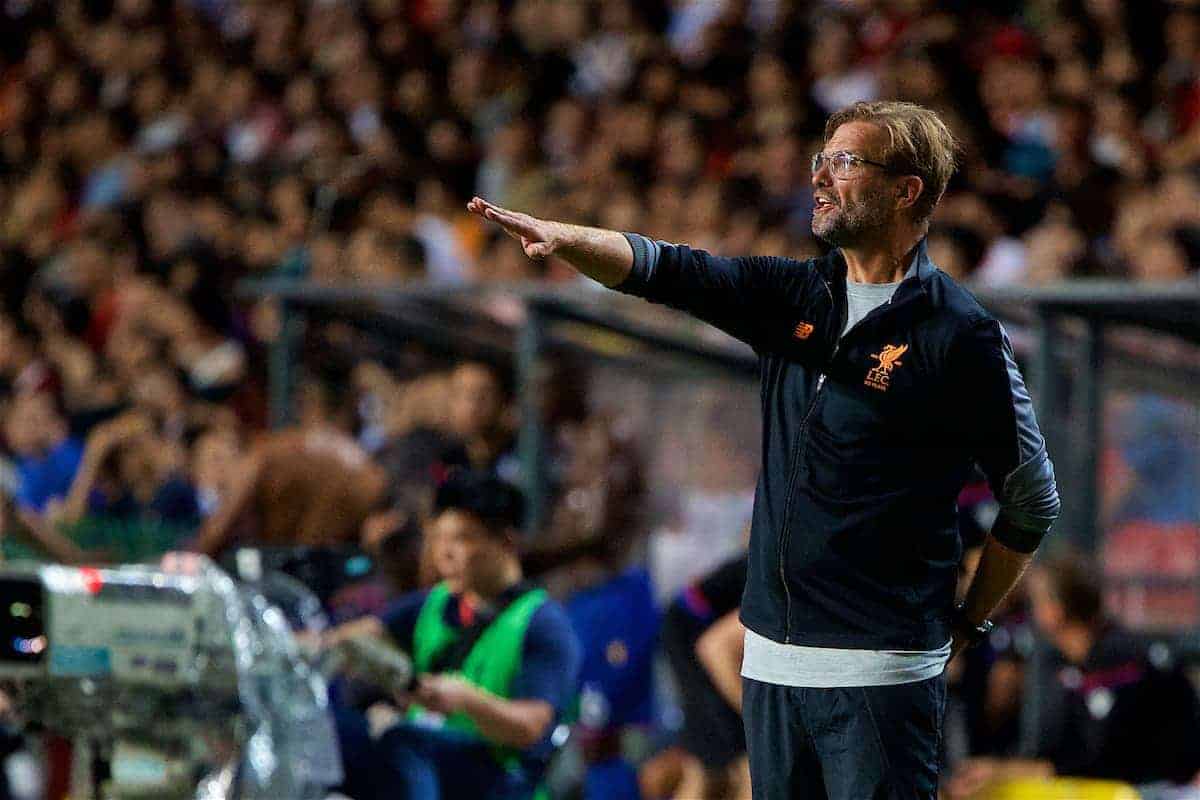 Jurgen Klopp has decisions to make at right-back, centre-back and in midfield as Liverpool visit Crystal Palace, with one eye Wednesday’s Champions League clash with Man City.

The Reds head to Selhurst Park on Saturday to face a struggling Palace side, reconvening after the international break.

Klopp’s men ran out 5-0 winners at home to Watford in their last outing, with the incredible Mohamed Salah‘s four goals taking him to the top of the Premier League scoring charts.

Victory this weekend would see Liverpool rise to second in the table, although they will have played two more matches than Man United by the time the final whistle blows.

The Reds are favourites to leave south London with three more points to their tally, but a lack of time on the training ground is far from perfect.

Klopp has decisions to make when it comes to who starts this weekend. Second-guessing a Klopp starting lineup is never an easy thing, especially when a game as big as the quarter-final clash with Man City follows four days later.

The only certainty is the absence of Joe Gomez and Emre Can.

Nathaniel Clyne is expected to make the squa and there is a chance of him starting, with Trent Alexander-Arnold in need of being rotated – the teenager cannot be expected to start all of the next four games in 11 days.

With a back issue keeping Can out, Jordan Henderson should start, although given the captain’s often difficult to play twice in a week, what does that mean for him against City?

Joel Matip is favourite to get the nod over Dejan Lovren at centre-back, although the latter’s more physical style may make him better suited to dealing with former Reds striker Christian Benteke.

Alex Oxlade-Chamberlain and Gini Wijnaldum could be deployed ahead of Henderson in midfield, but James Milner is also an option and he has the benefit of not being away on international duty.

Alternatively, there are several changes that Klopp could opt for from the team above in order to keep his players fresh.

Lovren may end up being his preferred choice alongside Virgil van Dijk – who he goes with out of the Croatian and Matip won’t necessarily indicate who is facing City – while Alberto Moreno is an able deputy to Andrew Robertson and would mean resting both the fullbacks, the most physically demanding roles in the team.

Adam Lallana is badly in need of playing time, so bringing him in along with Milner, and resting Wijnaldum and Oxlade-Chamberlain is something Klopp may consider.

It’s great to have such depth.

There is every chance that Alexander-Arnold could start, considering Clyne’s lack of football, but either way, the most likely Liverpool team on Saturday will see just two changes made from the side that thrashed Watford.

Gomez will be replaced at right-back by one of the English pair, and Oxlade-Chamberlain will come in for the stricken Can.