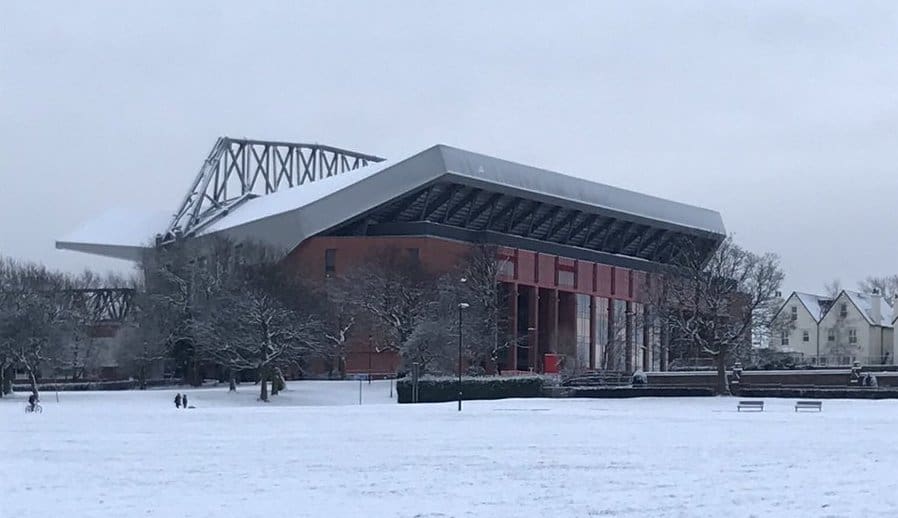 With just over 48 hours until Liverpool are due to host Newcastle United at Anfield, light snow continues to fall on Merseyside.

BBC Weather are currently forecasting light snow for Friday and Saturday, with strong winds and temperatures not above zero.

The Met office, meanwhile, are forecasting slightly colder temperatures but slightly less chance of snow for Liverpool – although “snow showers” are still possible.

That means that the snow that is currently on the ground will become frozen and compacted when further snow falls, making dangerous conditions on roads and paths.

While Anfield’s pitch will have no problems with the conditions, benefitting from under-soil heating and improved drainage that was installed last summer, it’s the roads and conditions around the stadium that could put the game in jeopardy.

The Reds’ home match against Fulham in December 2010 was postponed for those reasons: “the conditions around the stadium and further afield for people travelling to the match are such that the decision was taken, following Police advice on safety grounds, to postpone the game.”

It seems unlikely that there will be substantial actual snow between now and Saturday evening (5.30pm kick off), but the issue will be how well the roads and paths can be made safe for the visiting 54,000 supporters.

At present, however, the club maintain that the game “is planned to go ahead as normal.”