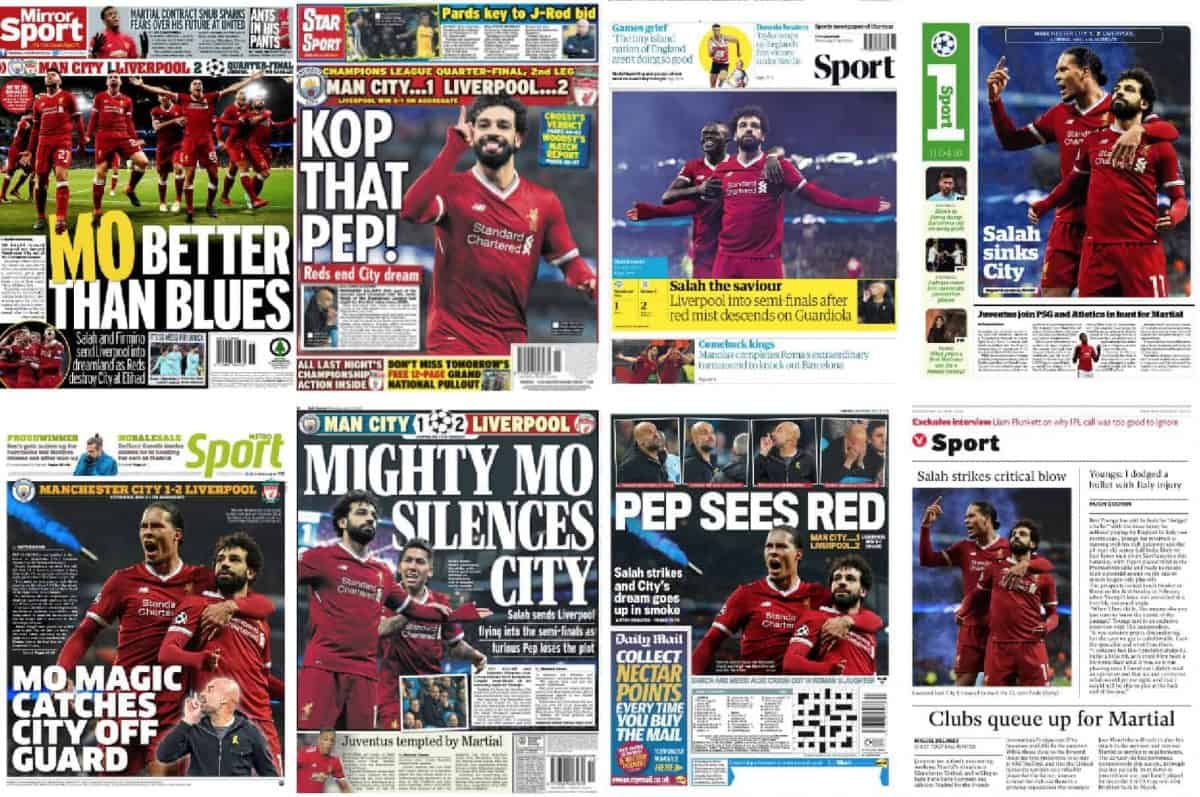 The media felt Liverpool were worthy winners after the 5-1 aggregate victory over Man City and believe Jurgen Klopp’s side can go all the way.

The Reds edged Champions League dreams a step closer to reality after producing a huge effort to triumph at the Etihad Stadium with a 5-1 aggregate win.

The night got off to a nightmare start when Gabriel Jesus converted after just two minutes, and Klopp’s side were fortunate to go in at the break only 1-0 down.

But a much-improved second-half display followed and goals from Mohamed Salah and Roberto Firmino completed a stunning fight-back and brilliant victory to wrap up the tie and a semi-final spot.

It was another special night for Klopp’s side, who will be the team all possible semi-final opponents want to avoid, and here’s what the media made of another night to remember.

Reporters reflected on an engrossing quarter-final, assessed the Reds deserved winners and discussed how the tie was won For all of City’s hard-luck stories – and there will be a few – the brutal reality is that they have been absolutely destroyed over the course of two games.

The Guardian’s Daniel Taylor thought the tie was won in the stunning first leg victory at Anfield:

Ultimately, though, too much damage was inflicted by Liverpool’s 3-0 first-leg victory.

The Mail’s Martin Samuel thought the 5-1 score-line was fully merited and assessed Liverpool’s clinical finishing as the difference:

An aggregate score of 5-1 was every bit as masterful as it appears and, just as questions are being asked of Guardiola, so Jurgen Klopp deserves every ounce of praise thrown his way.

Most importantly, they were clinical in a way Manchester City were not; they took chances where their opponents squandered, just three shots on target in 180 minutes.

The Independent’s Jonathan Liew felt City paid the price for lacking control in their performances over the two legs:

What happened in between was an object lesson in the key difference in football between intent and purpose, between speed and haste.

But what ultimately undid City was their failure to judge the tempo of the game, once at Anfield last week, and once again here.

For Goal.com Neil Jones was among numerous reporters to praise Liverpool for showing back-bone and delivering a brave second-half display:

As for Jurgen Klopp, he could reflect on a performance of heart, character and, when it mattered, composure too. They may have been timid to begin with, but they puffed their chests out after the break.

Writing for Football365, Daniel Storey praised the Reds’ “mettle” and felt this desire reflected a side built in Klopp’s image:

More importantly, when the going got tough over these two energy-sapping legs, Liverpool displayed the mettle that so many have accused them of lacking.

This is a team built in its manager’s image, effervescent and cheerful but with far more depth than the smiling exterior makes you believe.

The Liverpool Echo’s Ian Doyle compared the Reds’ two defensive displays at City this season, noting how this one showed the improvements made:

This Liverpool defence is not the one that shipped five at Manchester City back in September.

It is much stronger, more organised, more composed, more resolute, more everything that you’re supposed to be when defending.

ESPN’s Mark Ogden compared Klopp’s side to Rafa Benitez’s Istanbul heroes, and assessed that German has found the perfect balance to deliver at both ends:

Klopp’s side are not quite as obdurate as that of the Rafael Benitez team that won the Champion League in 2005, but they possess more flair and cutting edge and it is proving to be a perfect blend.

Meanwhile, Dave Usher, also for ESPN, felt the biggest positive of the night was that Liverpool produced such a courageous performance away from Anfield:

This was the kind of display that many felt the Reds were incapable of producing. It’s all well and good winning at Anfield, riding the crest of a wave of emotion from the stands, but this was a whole different kind of statement by Liverpool.

Usher commended the German for his bravery in sticking with three attacking players at the Etihad Stadium, despite City’s relentless offensive efforts:

Guardiola had stocked his team with attacking players, but Klopp was brave and kept his three forward players on rather than introduce an extra defender.

That bravery paid off as eventually Liverpool were able to exploit City’s shorthanded defence.

The Liverpool Echo’s James Pearce hailed Klopp’s work in making the Reds to a force to be feared again on the biggest stage:

Now they are feared once again across the continent and that’s down to Klopp and the magic he has worked over the past two-and-a-half years.

The German has bought wisely, he’s developed what he inherited and created a team ethic which is enabling them to flourish. The juggernaut is gathering pace and a final trip to Kiev in May is now tantalisingly close.

Simon Hughes, in the Independent, firmly believes Klopp has produced “a miracle” in taking the Reds back to this level so quickly:

Really, it is a miracle Klopp has returned Liverpool to where it last ventured a decade ago so quickly: to reach the semi-finals of the Champions League and sit comfortably in the top four of the Premier League is spectacular when you consider he is yet to complete his second full season in charge. The Mirror’s Jack Rathborn thinks “the clinical nature” of the Reds’ displays could take Klopp’s side all the way:

The clinical nature of their performances at the Etihad will frighten any opponent and ensure Klopp might just guide them to glory in Kiev.

Storey assessed the Reds “now have no reason not to believe”:

Now they have no reason not to believe. That lump in the throat and churning of the stomach that we call ‘hope’ has never felt so strong.

Rather than ‘How can we?’, the question has changed: ‘Why shouldn’t we?’.

The BBC’s Phil McNulty went as far as to say there is “a sense of destiny” surrounding the Reds’ hopes of a sixth triumph:

However the potency of their attack, their growing momentum and the history that gives the club a sense of destiny in this competition means they will have high hopes of lifting the trophy for a sixth time.

But away from an attacking threat that has been present all season, it is a much-maligned rear-guard that is giving Klopp and Liverpool grounds for optimism.

Liverpool’s front three may get all the headlines, but their success is increasingly down to the solidity that is developing at the back.

And Ogden believes Salah’s rare ability to score from nothing alone gives the Reds a genuine chance of going all the way:

But in Mohamed Salah, Liverpool may just possess a player capable of delivering the Champions League with his scoring ability.

Salah seems capable of turning even the slightest opportunity into a scoring chance and at this level, the ability to do that can be priceless.

Also on Salah, the Independent’s Mark Critchley thinks the Egyptian’s impact on such a stage may have given him an advantage over Kevin de Bruyne for the PFA Player of the Year vote:

The PFA Player of the Year award is intended to reward domestic performances but, with Kevin De Bruyne on the same pitch and unable to inspire his side, you wonder how many of Salah’s peers finally signed and submitted their ballots tonight. Our own Henry Jackson waxed lyrical on Dejan Lovren, labelling the Croatian’s performance “one of his best ever” for the Reds:

The much-maligned centre-back produced one of his best ever performances for Liverpool, on a colossal night for him.

Aerially he was superb, his focus was absolutely spot on, and barring one reckless lunge on Raheem Sterling, all facets of his game were immaculate.

For JOE.co.uk, Robert Redmond was full of praise for Trent Alexander-Arnold after another excellent performance against Leroy Sane:

The young defender once again matched Leroy Sane, showing admirable discipline not to pick up a second yellow after going into the book after half an hour.

Alexander-Arnold read the game well, making a couple of key interceptions and standing up well to the challenge of Sane, particularly in the second-half. He really proved his quality over the two legs.

And finally, Usher reserved special praise for James Milner, labelling the vice-captain “an unsung hero of this season”:

Another brilliant Champions League display from the skipper for the night. Tireless. Covered every blade of grass at least twice, used the ball intelligently and tackled and intercepted as though his very life depended on it. An unsung hero of this season.