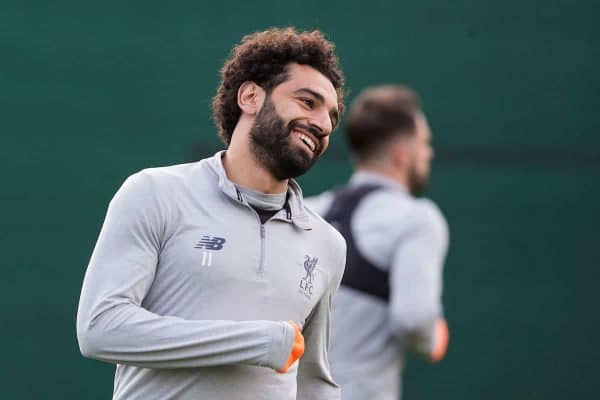 Photos: Liverpool train at Melwood ahead of Man City clash in Champions League

The Reds play host in the opening clash of the two-legged tie, as they bid for a place in the semi-finals of Europe’s top tier for the first time since 2009.

Their opposition have already visited Anfield this season and lost, suffering a 4-3 defeat at the hands of Jurgen Klopp‘s side back in January.

But they also humiliated Liverpool in a 5-0 rout at the Etihad earlier in the season, with Sadio Mane‘s first-half red card undermining the visitors’ chances.

Klopp oversaw training at Melwood on Tuesday evening, with a numbers of injuries leaving the manager with a threadbare squad.

Virgil van Dijk is one of just two fit senior centre-backs, with Dejan Lovren set to partner him as Joel Matip, Joe Gomez and Ragnar Klavan all miss out.

Trent Alexander-Arnold is expected to keep his place despite recent struggles against Man United and Crystal Palace, as Nathaniel Clyne is yet to play a single minute for the first team this term.

There could be changes in midfield, with Alex Oxlade-Chamberlain the prime candidate to come in after his influential cameo in Saturday’s 2-1 win at Palace.

But his attack is set to remain the same, with a positive Mohamed Salah joined by his regular forward counterparts Sadio Mane and Roberto Firmino as part of a 75-goal trio.

Some unfamiliar faces were put through their paces among more regular fixtures, with academy centre-backs Conor Masterson and Nathaniel Phillips, midfielders Herbie Kane and Curtis Jones and winger Rafa Camacho all involved.

Only Masterson is currently registered for the Champions League, though Liverpool have until 11pm on Tuesday to add another.

* Not in Champions League squad.