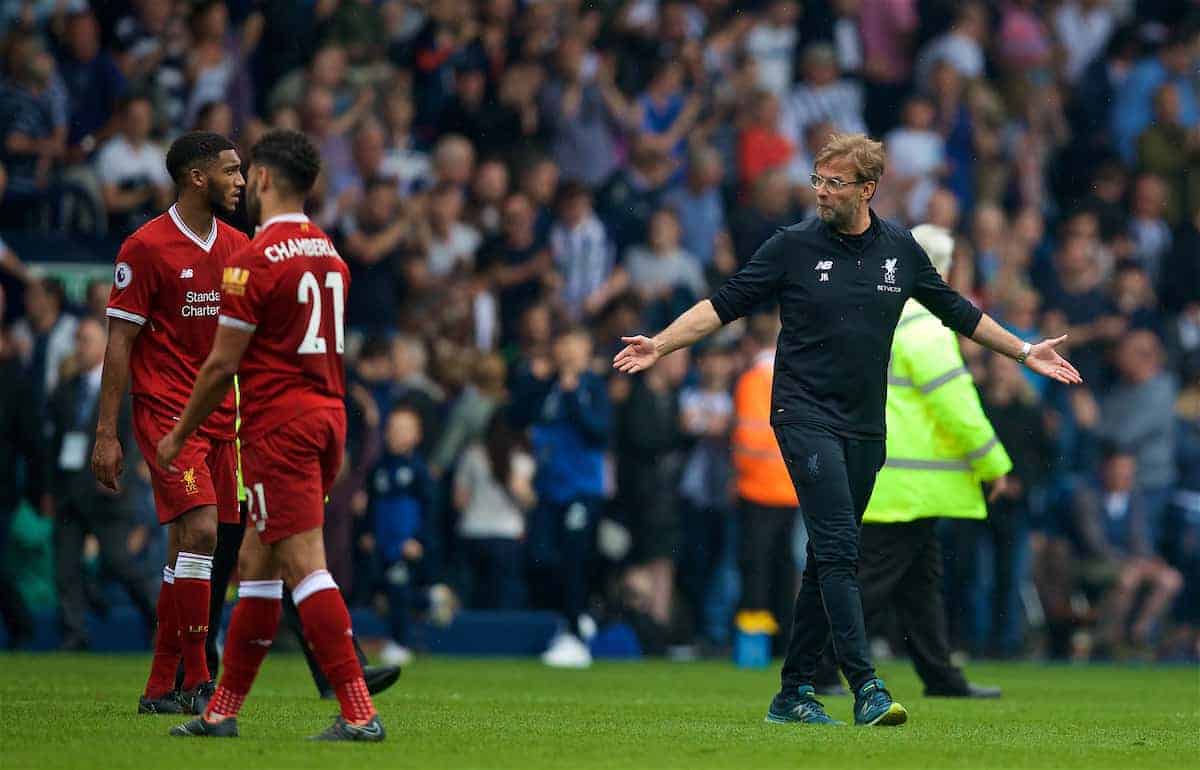 Supporters were left with mixed emotions after Liverpool let a two-goal lead slip to draw 2-2 away to West Brom in the Premier League on Saturday.

The Reds looked to be cruising to a comfortable three points after Danny Ings and Mohamed Salah put a buffer between them and the Baggies.

But a late flurry from the hosts that saw Jake Livermore and Salomon Rondon score left Jurgen Klopp‘s side ruing their complacency ahead of Tuesday night’s clash with AS Roma at Anfield.

Klopp made five changes to his side for the trip to the Hawthorns, and this is a performance that perhaps highlighted a lack of quality in his squad as much as it did their priorities at this stage of the season.

Made up for Danny Ings.

“That should do for his confidence! Strikers need those, after such a long layoff and injuries…so happy. And the Allez chants begin!”

Could not be happier for Danny Ings.

The referee was criticised for a string of poor decisions…

Ref has money on Roma to win the Champions League. Only reason he's not booking the WBA players.

I can't remember the last time I've seen a referee swayed so much by the home crowd as Attwell here. It's bordering on comical.

“West Brom somehow come off that pitch without a single yellow card, crazy.”

Every week a different fella try’s his best to show he is in fact the worst ref in the league….hell of a competition

Another week, another abysmal referring display. The standard in this country is as bad as I can remember.

Praise rained down on Salah after he scored his record goal…

Phenomenal play from Roberto Firmino and Alex Oxlade-Chamberlain to create an opportunity for Mohamed Salah to apply yet another deft finish. Beyond his astounding numbers, he is such a special player; explosive and elegant, strong and smooth.

Great ball by Ox too! pic.twitter.com/druM4uLFcQ

Superb from Oxlade Chamberlain again Perfectly weighted and the finish from Salah is ???

He's scored the same amount of goals as Stoke City.

But ultimately fans were left to rue two points dropped…

We never make things easy for ourselves. Dreadful today.

Two stupid points dropped, lazy and careless by #LFC. But the big one is Tuesday night – and top 4 still very much in our hands. Move on from this one but learn the lesson you can’t switch off in any game…

Liverpool played in second gear today and left themselves vulnerable as a result. Both full backs struggled.

The players’ minds were elsewhere, as typified by Gomez. He was almost nonchalantly lazy today, on and off the ball. Several more were the same.

Reality check on actual squad depth and strength just at the right time.

“Huge huge gap between our 1st and 2nd team.”

Too many Reds players with one eye on Tuesday. If they’d closed the game out nice and early they could have had both eyes on Tuesday by now.

Well that was a bit bloody annoying wasn't it?

“Maybe a good thing to get the hubris out of the system before tuesday. Bring on Roma.”

Anyway, we've far bigger fish to fry than that. On to Tuesday!