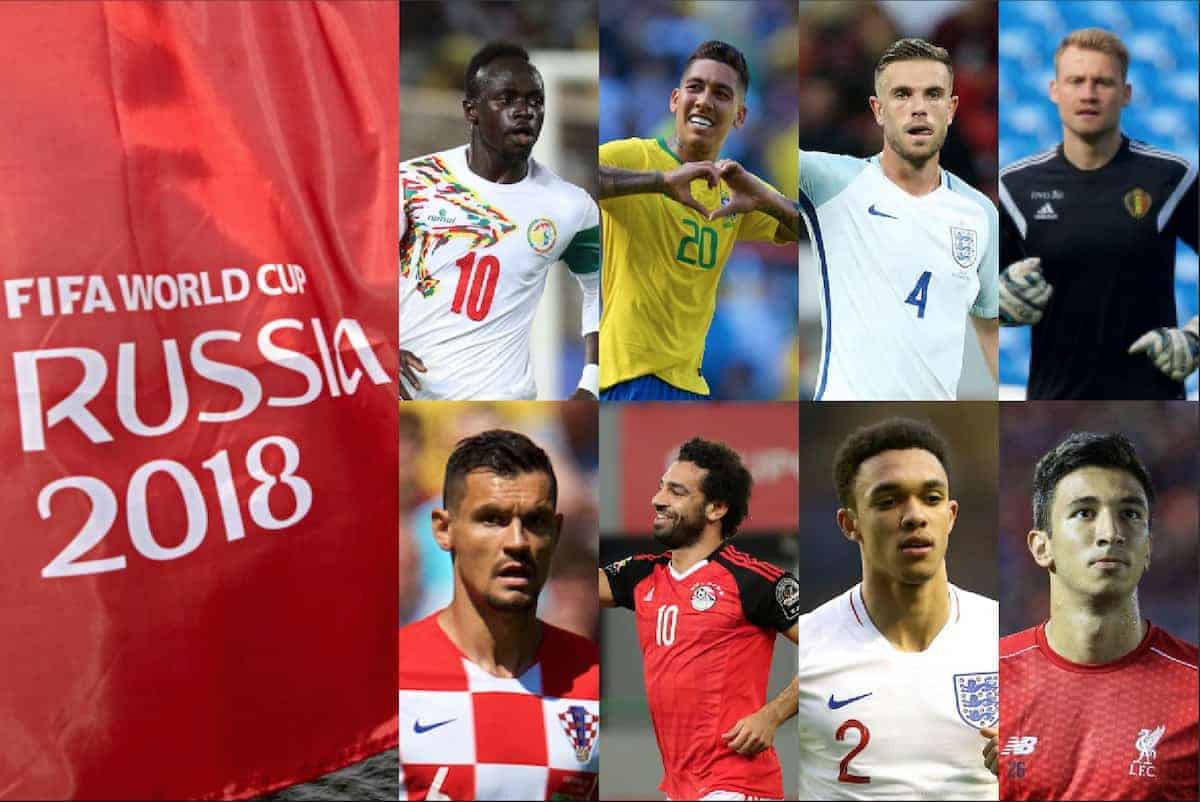 The finalised World Cup 2018 squads have been named by every competing nation, and Liverpool will have a strong presence in Russia.

Given the talent at the disposal of Jurgen Klopp these days it’s not a surprise to see a host of first-team players heading to the biggest tournament of all.

In total, Liverpool have eight players who—barring an untimely injury—will be involved with their respective nations’ final squad of 23.

For Belgium, Simon Mignolet travels as the likely No. 2 goalkeeper, behind Chelsea‘s Thibaut Courtois.

Spending much of the second half of the season sidelined will not have helped Mignolet’s chances of seeing action, but he plays an important support role.

Brazil have Roberto Firmino in their squad and pushing hard to be the first-choice No. 9.

Firmino netted at Anfield in a friendly for his nation at the weekend, further enhancing his reputation—though he’s still likely to play second-fiddle to Gabriel Jesus.

That Firmino goal came against Croatia, who have Dejan Lovren in their squad.

Lovren is a starting centre-back for his national team and will surpass the 40-cap mark during the World Cup.

Henderson could well end up as the vice-captain of the national team, though neither Reds are absolute certainties to start.

The midfielder is vying against the likes of Eric Dier and Jesse Lingard for a spot, depending on manager Gareth Southgate’s defensive selections, with Dier capable of playing centre-back.

Alexander-Arnold has a reasonable chance of at least emerging as a starter, even if he doesn’t line up from the first whistle of the tournament, battling against Kieran Trippier for the right wing-back spot.

Egypt, of course, have selected Mohamed Salah in their squad despite a recent injury.

The national team—indeed, the whole nation—are hopeful that Salah will recover from his shoulder complaint in time for the second group fixture, and his presence will be key to their hopes of progression.

For proof of his importance, it’s worth noting Salah has 33 goals for Egypt; the next highest scorer in the squad is 32-year-old midfielder Abdallah Said, who has six.

Similarly, Senegal will hope Sadio Mane can play a key role and help them through an even-looking group.

Mane’s 14 international goals make him the second-highest scorer in the Senegal squad.

Finally, Serbia provided something of a surprise by calling up Marko Grujic in their final 23 after he impressed on loan at Cardiff City.

Grujic has just seven caps but his potential is enormous and he could be a surprise impact player for them in Russia.

Of course, not every top player gets to play at a World Cup finals—Netherlands failed to qualify this time, for example, so Virgil van Dijk and Gini Wijnaldum miss out—and there have been a few surprising omissions, too. Divock Origi and Emre Can were excluded from the Belgium and Germany squads respectively, while new addition Fabinho is not in the Brazil squad.

Adam Lallana, meanwhile, remains on standby for England in case he is needed to cover for an injury before the tournament starts.

There could yet be one or two more players with Liverpool futures performing in Russia, with Nabil Fekir and Ousmane Dembele—both of France—heavily linked.

Elsewhere, a host of former Reds will be at the tournament including Luis Suarez, Seb Coates, Philippe Coutinho, Pepe Reina and Iago Aspas.