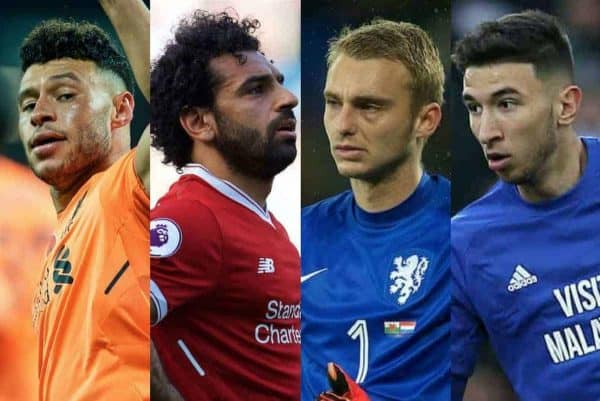 We round up the latest Liverpool news and transfer rumours on Friday, as the World Cup takes a one-day break before the last 16 kicks off.

As Jurgen Klopp prepares to welcome the majority of his squad back for pre-season training on Monday morning, one absentee will be Alex Oxlade-Chamberlain.

The midfielder is not expected back until at least November having picked up a knee injury in April’s 5-2 thrashing of AS Roma in the Champions League, and a comeback in the new year could be more likely.

He was on hand to welcome Naby Keita to Melwood on the Guinean’s move this week, but speaking to FATV on Thursday he struggled to mask his frustration despite vowing to retain a positive outlook.

“I saw the surgeon just now, he’s happy with everything, so we’re moving in the right direction,” he explained.

“It’s just obviously going to be a long process and a boring one, but that’s life. I’m all good.

“I’ve got to stay positive, it’s not going to get me anywhere if I’m not positive around the lads and just in general. It’s life, I’m still living so I’m happy.”

Mohamed Salah became the first Liverpool player knocked out of the World Cup when he failed to fire Egypt to the last 16, with his shoulder injury still clearly taking its toll.

The forward has since returned to his homeland for an extended break before rejoining Klopp’s squad, and has failed to avoid the limelight.

Despite the shameless leaking of his address on Facebook, Salah made a brilliant gesture to the hundreds of supporters who camped outside of his home on Thursday, as the BBC’s Shaimaa Khalil revealed on Twitter:

Crowds gather outside @MoSalah’s home in #Egypt after his address was leaked on Facebook . So what does he do? He comes out to greet people and sign autographs…
We are not worthy of #MoSalah pic.twitter.com/85tlob2bDB

Salah welcomed fans on the streets, taking photos and signing autographs, proving that despite the heartbreak he has suffered on the pitch in recent weeks he has retained his vibrant character.

Dutch stopper Jasper Cillessen has been touted as a possible replacement for Loris Karius as Liverpool’s No. 1, though there are yet to be concrete claims in England.

The 29-year-old has played second fiddle to Marc-Andre ter Stegen since joining Barcelona, and has resolved to leave in search of regular first-team football this summer.

That is according to Spanish publication Sport, who also claim Cillessen could be available for a bargain fee.

They suggest that Barcelona would be willing to part ways with their backup goalkeeper for around £26.5 million, which is significantly lower than asking prices touted for Alisson and Jan Oblak.

Cillessen would arguably provide a major upgrade on Karius, and if these reports are to be believed Klopp would be wise to make a move.

Marko Grujic played a pivotal role in Cardiff City’s promotion to the Premier League after joining the Bluebirds on loan in January, making 14 appearances on their way to a second-placed finish.

The midfielder earned a place in the Serbia squad for the World Cup, and though he failed to feature at just 22 he is clearly making strides in his development.

But with both Naby Keita and Fabinho already signed this summer, and with Klopp eyeing another first-choice midfielder, Grujic’s hopes of a first-team role at Anfield this season are slim.

It was reported on Thursday that Cardiff were in talks with Liverpool over another loan spell in Wales, and now manager Neil Warnock has confirmed this.

“We’d like a couple of loan players in. We’ve spoken to Marko and then I’d want to get a striker as well—that’s the missing piece,” he told reporters.

Spending another campaign under Warnock, who is a big admirer of Grujic’s talents, could be exactly what he requires to take the next step.