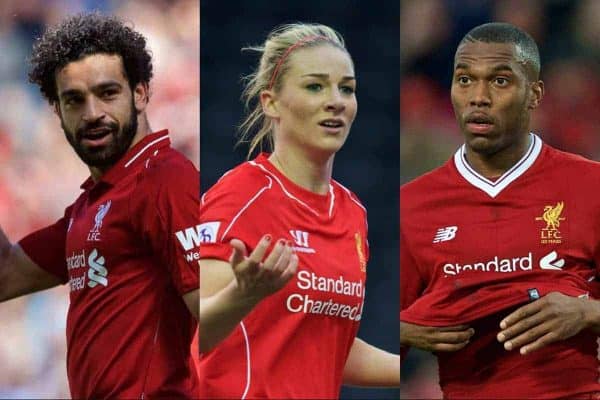 We round up the latest Liverpool news and transfer rumours on Saturday, as the World Cup continues and Jurgen Klopp enjoys a well-earned break.

Mohamed Salah was forced to watch on from the substitutes’ bench as Egypt fell to a late Jose Gimenez header to lose 1-0 to Uruguay in their World Cup opener on Friday.

The forward, still feeling the effects of the shoulder injury he picked up in the Champions League final, looked distraught on the sidelines as his team-mates’ valiant efforts were ruined.

Speaking after the game, Egypt manager Hector Cuper explained that he didn’t want to risk Salah’s fitness, instead setting his sights on a World Cup debut for the 26-year-old on Tuesday against Russia:

“Perhaps if Mo had been on the pitch today the outcome would have been different, but we can’t know that.

“Certainly he has contributed a great amount to the team and will contribute in future matches.

“At the end of the training session we examined him and there was some doubt if he fell or was hit by another player, and we wanted to avoid a risk today.

“We want to have him in top form for Russia and Saudi Arabia.”

Egypt are currently third in Group A following victories for both Russia and Uruguay.

Along with manager Scott Rogers, a host of players have left the Liverpool Ladies this summer, in an overhaul of the ranks in Widnes.

Gemma Bonner was confirmed to have left for Manchester on Friday, with the 26-year-old taking to Twitter to express her gratitude to Liverpool:

“It has been a huge honour to captain this great club in 100+ games and one of the proudest moments in my career leading the club I support to two league titles,” she wrote.

New manager Neil Redfearn will preside over considerable change this summer, as the Reds prepare for the new campaign.

Though Liverpool aren’t likely to make any signings during the World Cup, there could be activity on the rest of the squad’s return to pre-season training next month.

One of those expected to depart before the start of 2018/19 is Daniel Sturridge, with the striker’s prospects diminished in recent seasons after Roberto Firmino established himself as first-choice No. 9.

Sturridge spent the second half of last season on loan at West Brom, but only made six appearances as a hamstring injury ruled him out of the Baggies’ fight against relegation.

It is unlikely he would step down to the Championship to aid Darren Moore’s promotion charge, and instead Turkish Super Lig outfit Besiktas are rumoured to be leading the race.

According to Aksam, the Istanbul club’s fervent supporters—and their social media campaign to persuade Sturridge to join—have ensured he is “stepping closer” to a move to join Senol Gunes’ side.

With a move for Roma goalkeeper Alisson growing increasingly unlikely, as Real Madrid continue to lurk, Lazio stopper Thomas Strakosha has emerged as a possible target for the Reds.

Though there is yet to be any reports of concrete interest from English sources, Strakosha has been regularly linked in Italy.

And according to Citta Celeste, the Lazio branch of the Gazzetta dello Sport network, the Rome side have set a £35 million price tag for the Albanian.

This is said to be in an effort to “scare off the suitors,” with Bayer Leverkusen already claimed to have been deterred from their pursuit, but they are more optimistic over a Liverpool bid.

Furthermore, they add that “an English assault is not ruled out in the coming weeks.”