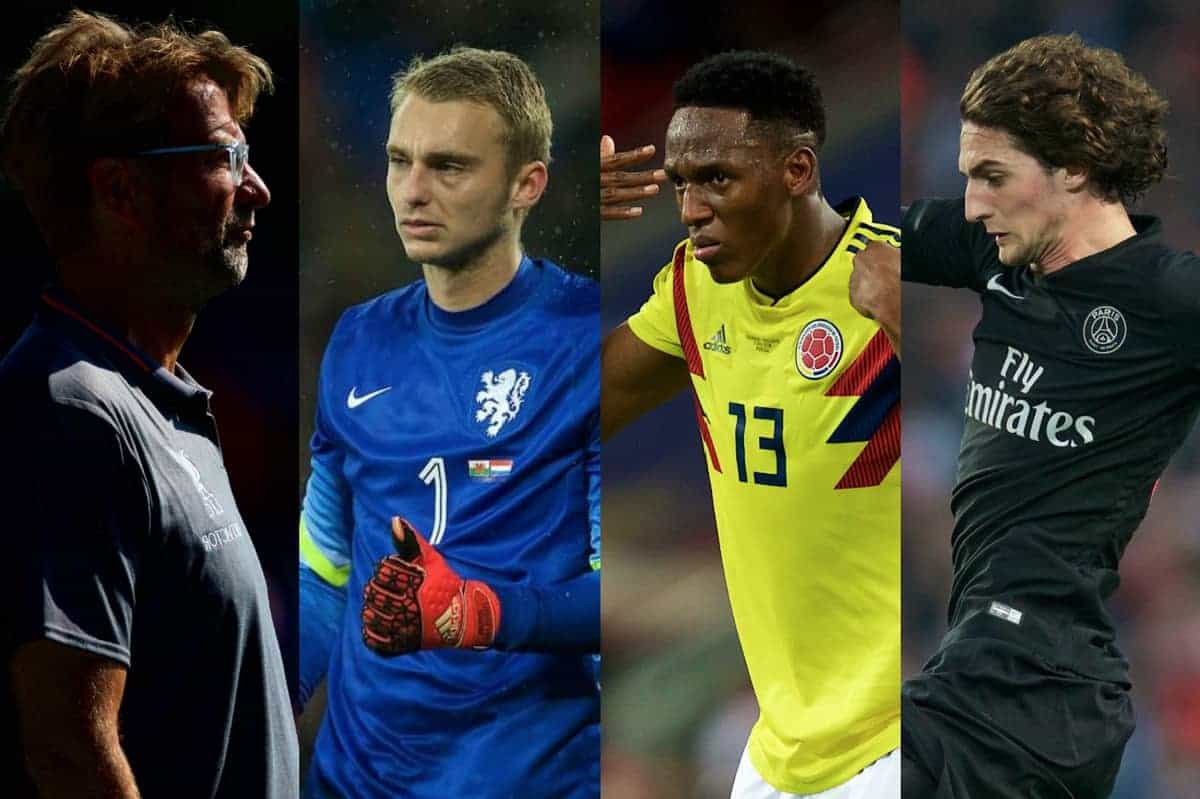 Liverpool have resembled title contenders at stages in both of the past two seasons, and a handful of additions could cement their status in 2018/19.

The Reds have secured back-to-back top-four finishes in Jurgen Klopp‘s first two full campaigns in charge, as their upturn continues under the German.

Last season’s surge to the Champions League final underlined their top-level credentials, but just as with their Premier League challenges in 2016/17 and 2017/18 it ultimately fell short.

Though Klopp’s squad boasts world-class talent, it arguably neither has the depth or variety to ensure parity, or superiority, when held up against last season’s winners Man City.

Steven Gerrard believes his former side are “knocking on the door,” but further additions should be made following the arrivals of Naby Keita and Fabinho to guarantee this.

Here are five signings Liverpool could make to boost their title hopes.

Klopp has pledged his faith in Loris Karius after the 25-year-old’s concussion-prompted nightmare in Kyiv, but Liverpool have also actively pursued a new first-choice goalkeeper this summer.

Though both Atletico Madrid’s Jan Oblak and Roma’s Alisson have proved too costly, a cut-price move for Cillessen would still provide the Reds with an established upgrade on Karius.

Joining Barcelona from Ajax in 2016, Cillessen has endured his wilderness years in Catalonia, making just 21 appearances for the Liga giants, but in the process also keeping 11 clean sheets.

His style of play would suit both Klopp’s system, operating behind a high defensive line, and the Premier League, and his experience suggests he has the concentration levels required to play for a dominant side.

Though initial claims of Liverpool’s interest have been quashed, Cillessen is said to be available for a bargain £26.5 million, with Barcelona not prepared to stand in his way if he does depart. Targeting a player on the back of an impressive World Cup is typically ill-advised, but Mina’s performances for Colombia highlighted the potential of a top-tier centre-back.

The youngster’s move from Palmeiras to Barcelona in January has so far heralded little success, with Mina playing just six times in the second half of last season, totalling 377 minutes on the pitch.

But his exploits in Russia served as a reminder of the talent he possesses, and if Barcelona opt to part ways with the defender shortly after signing him he would be a fine acquisition.

Mina is a tall, strong, goalscoring centre-back whose pace would, again, suit Klopp’s defensive approach, while his reading of the game and ball-playing ability can be nurtured alongside Virgil van Dijk.

Paulinho’s return to Guangzhou Evergrande frees up the non-EU slot Barcelona needed to sign Arthur Melo, but with Everton interested in a £21 million for Mina, Liverpool would be wise to join the race.

Newcastle United’s Jamaal Lascelles, subject of a failed £25 million bid from West Ham, could also be an option, but Mina arguably has more upside. The signings of Fabinho and Keita have effectively revolutionised Klopp’s midfield, providing the Reds with stability and dynamism in equal measure.

But with Adam Lallana‘s fitness wavering, Alex Oxlade-Chamberlain currently sidelined and Ben Woodburn likely to leave on loan another addition would be useful.

Rabiot has been a regular in the PSG midfield since his return from a loan spell with Toulouse in 2013, but has reportedly set his sights on an exit this summer as his standing in Paris diminishes.

An all-action midfielder who has previously professed his desire to play in the Premier League and, crucially, his support of Liverpool, he has just one year left on his current contract.

The prospect of Rabiot lining up alongside Fabinho and Keita and alternating with Oxlade-Chamberlain, Jordan Henderson and James Milner should be an attractive one for Klopp.

A well-publicised agreement for Fekir broke down in June, with complications with the player’s medical seeing Liverpool withdraw their initial offer of £48.4 million.

The No. 10, who captained Lyon to a third-placed finish in Ligue 1 last season, ensuring a return to the Champions League, subsequently departed for the World Cup as speculation cooled.

A lack of viable alternatives emerging during the tournament suggests the Reds could still revive a deal for Fekir, albeit on restructured terms to reflect their reservations over his knee problems.

Fekir has made 89 appearances for Lyon over the past two seasons, scoring 37 goals and assisting 20, with his last major injury a ruptured ACL in 2015/16, indicating that there are no immediate issues.

Lyon president Jean-Michel Aulas has attempted to stoke further interest from the likes of Real Madrid and Man United, but it still seems that if Liverpool want Fekir, he’s theirs. The addition of Fekir would provide Klopp with his replacement for Coutinho, taking up the first-choice role at the tip of Liverpool’s midfield and dovetailing with the attacking trio.

But with question marks over the futures of youngsters Harry Wilson, Ryan Kent and Sheyi Ojo, and Lazar Markovic‘s hopes of a long-term role at Anfield faded, the Reds still require further depth.

Shaqiri, who is available for a paltry fee at £13.5 million, is widely expected to join Liverpool ahead of their pre-season tour of the United States.

Though predominantly a right winger, Shaqiri could operate on the left and even in a more central role behind the striker, and injects quality and unpredictability from open play and set-pieces.

There are concerns over the 26-year-old’s attitude, but having already been identified by the Reds’ stringent recruitment team it is likely Klopp is convinced he could adapt.