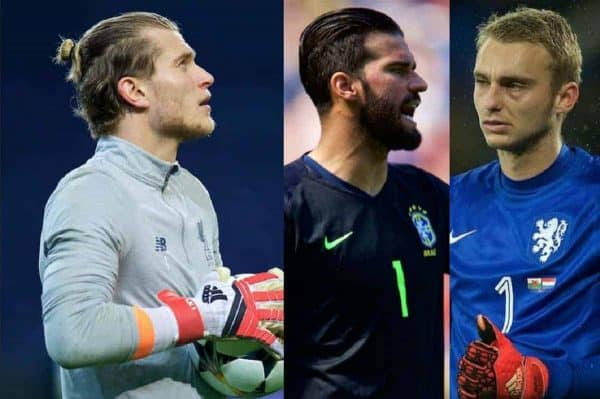 Loris Karius heads into pre-season expected to remain as Liverpool’s No. 1, despite Jurgen Klopp‘s firm interest in Roma goalkeeper Alisson.

Karius endured a nightmare in the Champions League final in May, with two concussion-prompted errors gifting Real Madrid a 3-1 victory in Kyiv.

The German’s performance that night has led to widespread calls for the Reds to sign a replacement, with both Alisson and Atletico Madrid’s Jan Oblak touted as possibilities.

Rumoured availability of Barcelona backup stopper Jasper Cillessen has added a third candidate for supporters to mull over, but with Liverpool set to begin pre-season on Monday no signing is imminent.

According to the Telegraph‘s Chris Bascombe, Karius “has his manager’s support” but faces a challenge to lay the ghosts of the final to rest.

Elaborating further, the Times‘ Paul Joyce insists that while “there remains interest in signing a new goalkeeper,” the pursuit of Alisson is “complicated.”

Roma are demanding a world-record transfer fee for the Brazilian, who is also on the radar of Real Madrid and Chelsea after his breakthrough campaign in Serie A.

Joyce adds that there is “no interest” in Cillessen, despite the Dutchman seemingly agitating for a move and claimed to be available for around £25 million.

Beyond Karius, Klopp will assess Danny Ward, Kamil Grabara and Caoimhin Kelleher at Melwood on the first day of pre-season, with Simon Mignolet still at the World Cup with Belgium.

Mignolet is likely to leave in search of regular first-team football, and while Ward and Grabara could provide Karius with competition there remain concerns over a long-standing problem position.