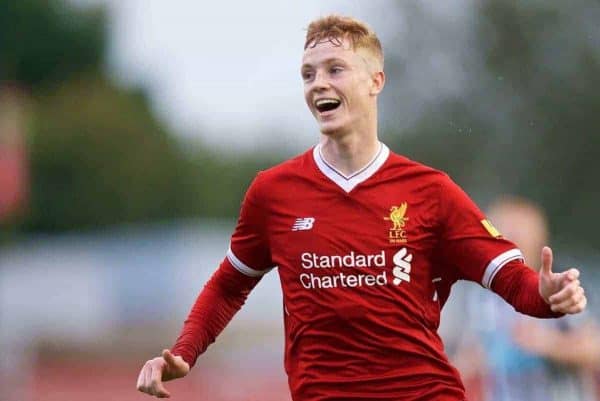 Liverpool lost 3-1 in their pre-season clash with Borussia Dortmund on Sunday night, following success for their U23s and U18s counterparts.

Both of the Reds’ most established youth sides were on tour in Hungary last week, as they prepare for another campaign in Premier League 2 and the U18 Premier League respectively.

Steven Gerrard’s move to take over Rangers in the summer has prompted a reshuffling in the U18s ranks, with Barry Lewtas taking over and a host of new faces taking to the field.

But Neil Critchley‘s U23s had a more familiar feel as they took on ETO Gyori on Sunday, with Connor Randall wearing the captain’s armband.

He lined up alongside Corey Whelan, George Johnston and Tony Gallacher in defence, with new signing Isaac Christie-Davies among those to feature in midfield.

Seventeen-year-old Elijah Dixon-Bonner joined the ex-Chelsea man in the middle of the park along with Matty Virtue, who spent the second half of last season on loan with Notts County.

The young Reds look to have fielded a trailist between the sticks, while Neco Williams and Glen McAuley—who scored a penalty in the 1-1 draw—were among those to also make an outing.

The 17-year-old, who captained the side, netted twice within two first-half minutes to secure a 2-0 victory, having already defeated Burton Albion and Blackpool this summer.

Patrik Raitanen, Rhys Williams, Remi Savage, Alex Turner, Yasser Larouci and Fidel O’Rourke were among those to feature at the Sandor Karoly Football Academy, while Edvard Tagseth made his long-awaited return from injury.

Elsewhere, last season’s U18s captain Adam Lewis has started both of England’s games so far at the U19 Euros in Finland, where they currently sit top of Group B.

Goals from Japhet Tanganga, Ben Brereton and Elliot Embleton were enough for the Young Lions to fight back to a 3-2 opening win over Turkey, before being held to a 1-1 draw by Ukraine on Friday.

Their next clash comes against France on Monday evening, with a place in the knockout stage up for grabs, as well as qualification for the U20 World Cup next year.