Xherdan Shaqiri is raring to go as his wait for a first Liverpool start continues, with the new signing putting himself forward as cover for the forward line.

Thus far, the Swiss international has made just one cameo sub appearance, on the opening weekend of the Premier League against West Ham.

A watching brief has been the story since then, with tight matches against Crystal Palace and West Ham not seeing Jurgen Klopp turn repeatedly to attacking options off the bench.

Shaqiri isn’t disheartened, though, and seems ready and willing to fill in as soon as he’s needed, judging by comments made in the matchday programme.

And not just when he’s needed, but also where—having highlighted his versatility during the summer pre-season campaign.

“The manager has brought a few players in this summer with very good quality who are going to help a lot,” said Shaqiri. 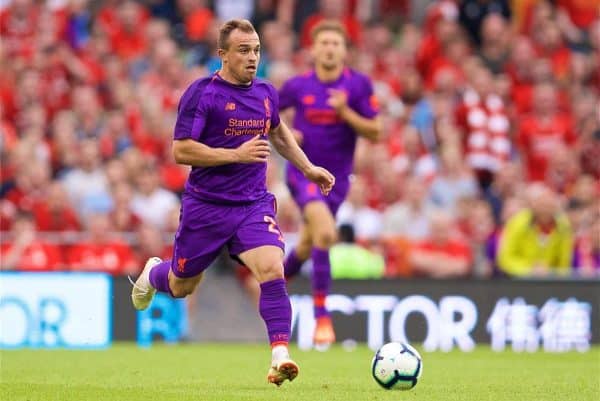 “This team needed a little competition in various positions because that makes you better and makes you stronger so I am looking forward to the season and we have started very well.

“I believe that I can play every position along the front line and the coach knows that.

“That’s really good and I like the football the way the coach plays. It is perfect football for me too.”

Shaqiri might still be waiting for his big moment to impact, but with domestic cup action starting up soon and the Champions League lying ahead too, rotation will be a big part of the Reds’ pursuit of success this season.

Along with the likes of Fabinho and Daniel Sturridge, it’s great to see Liverpool able to call upon such established names for first-team action when needed—and the results so far speak volumes for increased competition working well.