Jurgen Klopp has made just one change to his Liverpool lineup for the final game before the international break—away to Leicester City this afternoon.

The Reds will aim to continue their perfect start to the season when they take to the pitch at the King Power, having won three out of three so far.

Though they are yet to fully hit their stride, the performances seen in the opening trio of games suggests this is a Liverpool side who are maturing under Klopp.

He will be hoping for a similarly strong display in the East Midlands, having made one alteration on Saturday.

Alisson keeps his place in goal, with Simon Mignolet warned against further public criticism of his role as second choice in Klopp’s pre-match press conference.

Ahead of the Brazilian, Trent Alexander-Arnold and Andy Robertson will provide the forward thrust out wide, with Joe Gomez and Virgil van Dijk steady at the back.

Jordan Henderson starts in the No. 6 role, joined by Georginio Wijnaldum and James Milner in midfield.

And before they head off to join their respective national teams, Mohamed Salah, Sadio Mane and Roberto Firmino will be eyeing more goals and assists in attack.

Naby Keita drops to the substitutes’ bench with Henderson brought in, while there is still no place for Fabinho in the matchday squad.

Daniel Sturridge is available again, and if he comes on will be looking for a goal on his 29th birthday.

Ex-Liverpool goalkeeper Danny Ward is on the bench for the Foxes, with former Reds targets Ben Chilwell, James Maddison and Demarai Gray all starting. 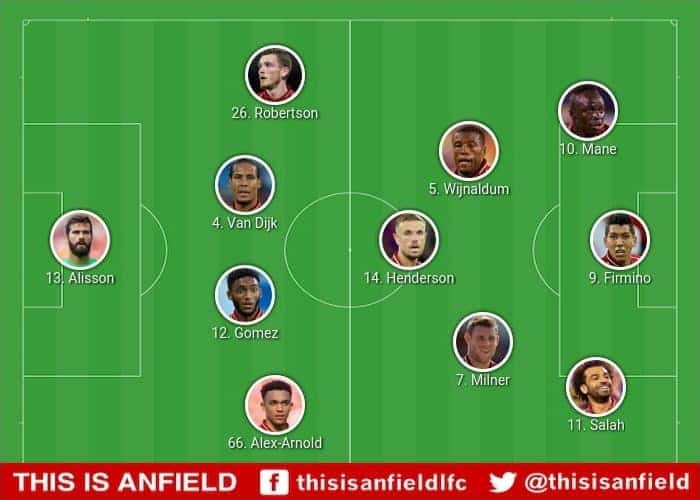