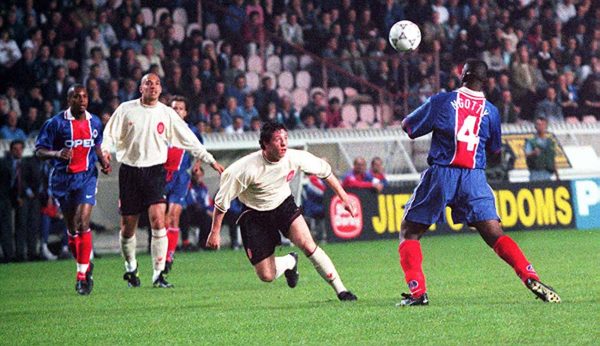 Liverpool’s last time in Paris: Reds given a lesson on nightmare night

Liverpool have played at the Parc des Princes twice before, with very different outcomes!

The Reds won their third European Cup in Paris in 1981 thanks to Alan Kennedy’s strike against Real Madrid, but it was a very different night when Roy Evans’ side were in Paris 21 years ago.

A Night To Forget

Evans turned Liverpool into one of the most entertaining teams in the country in the mid to late 1990s, but it was an era defined by falling short.

The Reds were a team littered with individual talent, but a perceived lack of professionalism often held them back, even though the ‘Spice Boys’ label has been over-exaggerated.

Defeat to Man United in the 1996 FA Cup final had done little to change that tag as nearly men, with the Reds constantly not getting over the finish line when it really mattered.

In 1996/97, Evans’ side found themselves in the UEFA Cup Winners’ Cup – a competition they qualified for by finishing runners-up to United in the FA Cup.

Having got past MyPa, Sion and Brann in the opening three rounds – not exactly the cream of Europe’s crop – Liverpool found themselves up against PSG in the semi-finals.

The French giants were on their way to finishing second in Ligue 1 behind Monaco and were a dangerous side featuring Brazil World Cup-winning pair Rai and Leonardo.

It was the kind of loss that was indicative of why success evaded the Reds so often during the 90s.

Despite being much-fancied to get past PSG, the first leg meeting in Paris ended up being a night to forget for anyone of a Liverpool persuasion.

David James was a weak-link at this point in his career and his failure to deal with danger twice proved fatal for his team.

Two poor pieces of decision-making and execution allowed Leonardo and Benoit Cauet to both prod home from close-range, in a disastrous first-half.

Capable of making world-class saves, James was too prone to producing errors at key times, as was the case that evening.

If Liverpool were in dire straits at half-time, Jerome Leroy’s strike six minutes from time was an almighty blow, giving the hosts an almost unassailable lead heading to Anfield.

Steven McManaman’s disallowed header had been one of the few moments the Reds threatened and speaking after the final whistle Evans described the occasion as “one of the most disappointing nights I have experienced”.

Two weeks later, the Merseysiders were looking for Istanbul-esque heroics, on a European night at Anfield that was rare during that period.

A wonderful atmosphere was created by the home faithful, as the Reds looked to reach a first European final since 1985.

Fowler found the bottom corner with a trademark effort with only 11 minutes on the clock, but Liverpool were frustrated as the game progressed.

A late Mark Wright header in front of the Kop set up a thrilling finale but they couldn’t find a third goal to take the tie into extra-time.

It was a night where the players did themselves proud but a tie where they let themselves down, and they had to watch PSG take on Barcelona in the final, with Pep Guardiola scoring in a 2-0 win for the Spaniards.

The Premier League title also evaded Liverpool that season, with United predictably having too much in the end, and there was a feeling that Evans’ time at the club was coming to an end.

The following year, the arrival of Gerard Houllier saw him and Evans named as joint-managers, before the latter eventually left in November 1998, leaving the Frenchman in sole charge.

He only won the League Cup during his time in charge and there will no doubt always be a tinge of regret that he couldn’t achieve the European glory of his ‘boot room’ predecessors.

The PSG side that Liverpool face on Wednesday are a whole different proposition, with some of the world’s best players in their ranks and an endless pit of money to spend.

A repeat of that defeat 21 years ago would leave Klopp’s side in trouble, but they are also on another level to the 90s outfit that fell short at Parc des Princes.