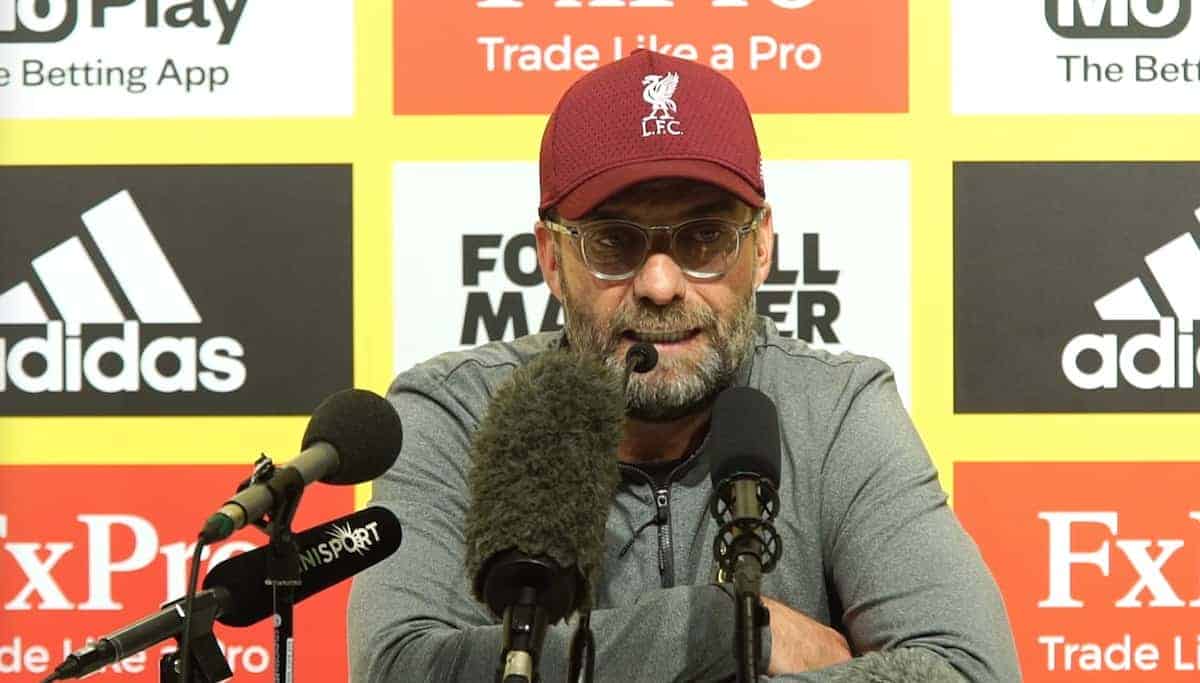 Jurgen Klopp reflected on a strange but ultimately comfortable 3-0 victory for Liverpool at Watford, with a big week ahead in the Premier League and Europe.

The Reds returned from the international break for a difficult trip to Vicarage Road, and with the Hornets in excellent form so far this season it was set up as a big test.

But while the home side threatened, they barely troubled Alisson between the sticks as Liverpool maintained their efficient, controlled success.

The goals all came after the break, with Mohamed Salah opening the scoring, Trent Alexander-Arnold netting a stunning free-kick and Roberto Firmino sealing the three points late on.

And this left Klopp in positive spirits as he addressed reporters after the game.

“I know you always expect perfection, but we had exactly one session to prepare. We needed to focus on the specific quality of the opponent,” he explained.

“We had to stay stubborn. It wasn’t a brilliant first half, but it was still good.

“The first goal was brilliant, the second a world-class free-kick.”

Victory ensured Liverpool’s best-ever points tally in the Premier League era after 13 games (33), and the manager lavished praise on his squad for having surpassed the club’s great teams from the past.

“It’s nice. At this fantastic big club, that this group of players can get this record is really nice,” he said.

“It’s a nice moment, I really think this group of players deserves it.”

Klopp was asked whether he had any issues with Jordan Henderson‘s second-half red card, but agreed that the captain deserved both yellows.

“The second one I didn’t like too much because we wanted to change him!” he joked.

“These things happen and we won the game. He cannot play against Everton but that’s already accepted.”

He also confirmed that while Joe Gomez missed out with a knock, he is “no doubt for Wednesday,” with Liverpool facing a tough trip to Paris Saint-Germain in the Champions League.