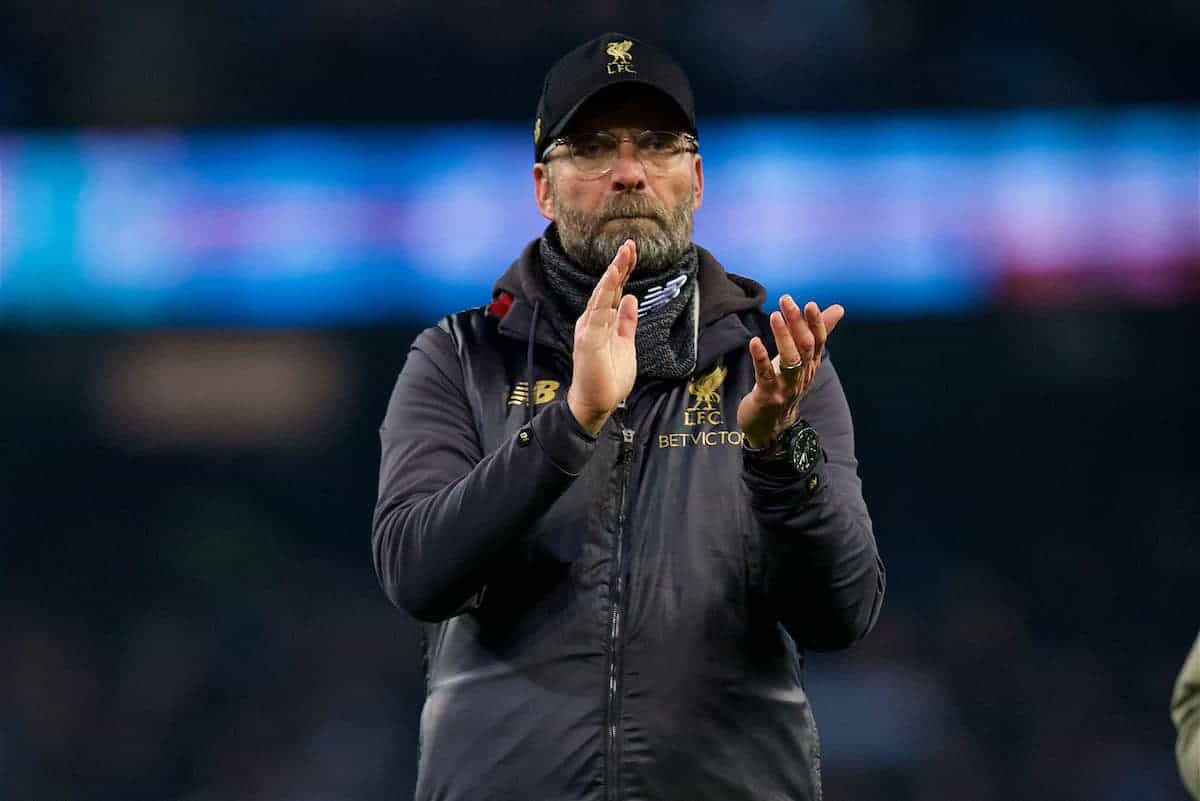 Liverpool manager Jurgen Klopp believes his side have made an important step forward when it comes to consistently matching title rivals Manchester City in terms of overall quality.

The Reds lost 2-1 on Thursday as Pep Guardiola’s men inflicted their first league defeat of the season but Klopp saw a change in that game which he believes was not present before – even in their three victories over City in the previous campaign.

Liverpool may lead the league by four points from their north-west rivals but City are still considered the best team, although Klopp believes they have now become a genuine match for the champions.

“From my point of view we were never on a level with City since I came in,” said the German.

“We won games against them, especially since Pep, but in these games City were better.

“We had our moments (on Thursday) and caused them completely different problems to the games before.

“Last year the Champions League (quarter-final) game at home when we won 3-0 it was a brilliant game but we were under pressure in a lot of moments.

“I don’t know if we had more than four shots on target but we were quite clinical that day.

“That’s how you have to play against City, in the moment when you get the ball you have to make the best of it.

“This game was different and that is an important step for us. It is very important we see it.

“It is not luck and using momentum. It was a really tough games for both teams.

“This game was different to all the other ones we have played so far: away to City is the most difficult game you can imagine at the moment.

“Yes we lost 2-1 but no-one would have been surprised if it was a draw and with a little bit of luck we could have won the game.”

Klopp now has to turn his attention to Monday’s FA Cup tie at fellow Premier League side Wolves.

After a busy December he plans to make changes with the likes of Alberto Moreno, Adam Lallana and Daniel Sturridge expected to get much-needed game time, with the prospect of youngsters Rafael Camacho and Curtis Jones also being included in the squad.

However, the most significant change is in goal where £65million summer signing Alisson Becker will be rested to give Simon Mignolet only his second appearance since the FA Cup exit to West Brom last January.

“(Mignolet) will play, of course. The goalkeeper position is a different one but Simon, I could write a book about all the good things I could say about him,” added Klopp.

“I’m not sure if you saw it before the Manchester City game warming up, he had seven, eight incredible saves.

“That’s how he is, he’s a fantastic professional, and did brilliantly so far. Like all the boys who don’t play constantly week in week out, they kept the level really high in training.

“Our kind of A versus B matches are unbelievable high quality and that is because of the boys in behind.

“Simon is a Premier League goalkeeper, everybody knows that, so I’m really happy for him that he can have that game.

“It will be a difficult game, maybe good for a goalie. I’m pretty sure he will have the opportunity to show up a few times.”