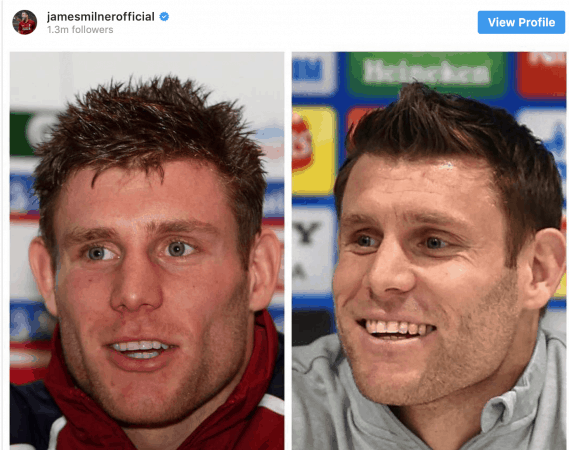 A number of Liverpool players have taken to social media to turn back the clock and show how much they have changed in 10-years.

The internet is a wonderful and mysterious place where new fads and crazes are constantly emerging, and it has thrown up another trend for people around the world to take part in: the 10-year challenge.

It sees people put two photos side by side on social media, with one being current day and the other taken at least 10 years ago.

And a number of Liverpool players have taken to Instagram to share their transformation over the past decade.

Adam Lallana rose through the ranks with Southampton and in 2009, as a 20-year-old, he had established himself as a regular within their first team, starting the year in the Championship and ending it in League One after the Saints were relegated in the 2008/09 season.

He remained an integral part of Southampton‘s team as they secured promotion back to the Premier League after just three-years.

A move to Liverpool would follow in the summer of 2014, where current day sees the midfielder plagued by injuries having made 148 appearances for the club.

From City to Chelsea in 09 to now. Memories I tell thee … ?????#10yearchallenge #blackdontcrack ya dig!!

For Daniel Sturridge, 2009 was a year of changes as he started his third-year of senior football as a Manchester City player and ended it as a member of Carlo Ancelotti’s Chelsea team.

The 19-year-old spent four-years on Chelsea‘s books before making the switch to Liverpool in early 2013, where his first full season in red proved to be his most prolific having formed a deadly partnership with Luis Suarez.

Fast forward 10-years and Sturridge is currently favoured as an impact substitute for Jurgen Klopp, where he has three goals in 16 appearances to date.

As James Milner said himself, he’s hardly changed bar a few wrinkles here or there.

In 2009, the then 23-year-old was a member of Aston Villa having already played for the likes of Leeds United and Newcastle United earlier in his career – it was a year which also saw him handed his senior England debut.

The Milner of 2019 is a key member of Jurgen Klopp‘s side, where his versatility and experience have proven instrumental in Liverpool’s season thus far.

Simon Mignolet and Sheyi Ojo also shared their transformations on social media, where, in 2009 the former had established himself as the first choice keeper at his boyhood club in Belgium, Sint-Truidense V.V.

A three-year spell with Sunderland soon followed before he linked up with the Reds in 2013, where he currently finds himself as second choice stopper following the summer arrival of Alisson.

He caught the eye of Liverpool after a quick rise in the ranks, and since making the move to Merseyside in 2011 he has spent the majority of his time on loan with the likes of Wigan and Fulham, where he is currently plying his trade with Reims in Ligue 1.