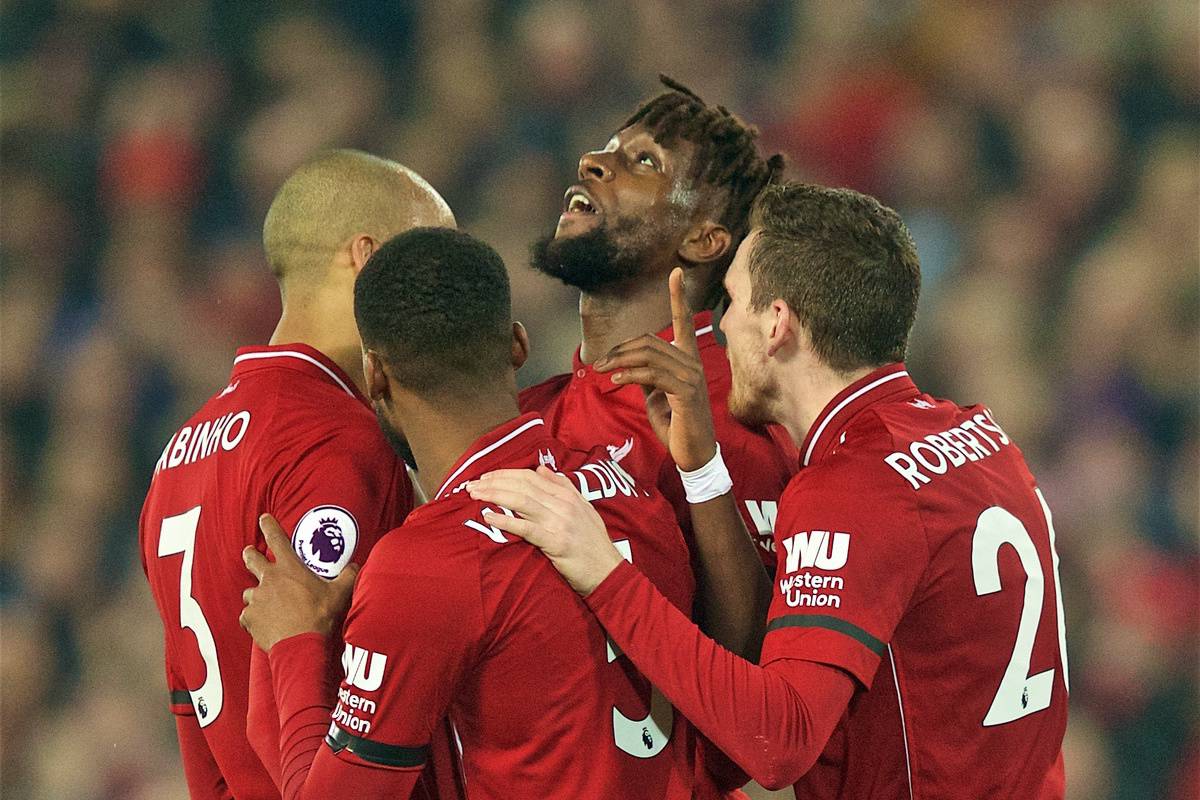 Liverpool returned to winning ways with an emphatic 5-0 victory over Watford on Wednesday, a performance which had fans

Liverpool welcomed Watford at Anfield in search of not only three much needed points, but an improved level of performance from that seen at Old Trafford over the weekend.

And Jurgen Klopp and the Reds faithful needn’t wait long to see an immediate response as sustained pressure piled on Watford‘s doorstep reaped its rewards early on.

Sadio Mane guided the ball in the back of the net twice in the space of 11 minutes after finding himself on the end of a pair of stunning deliveries from Trent Alexander-Arnold.

A goal to Divock Origi and a brace from Virgil van Dijk in the second half sealed victory in what was a ruthless display from the Reds, with the result maintaining Liverpool’s place atop of the table with 10 games to go.

Here’s how supporters reacted to the victory on social media and our forums.

Mane was a surprise selection through the middle, but he didn’t take long to make his mark…

Origi left, Mané central, Salah right is not what I would have guessed

Mane through the middle isn't half bad, is it?

“Fucking hell Sadio, that’s not fair.” – Mascot88 on the forums.

Mane's movement and linkup play playing as a no.9 has been superb. Rarely ever plays that role for Liverpool, but makes it look so natural.

“Inspired move playing Sadio through the middle, it has to be said.” – Libero on the forums.

Sadio Mane's doing a fantastic job in Firmino's role. Dropping off, picking up possession and running straight at the heart of the Watford defence. Two sublime finishes as well.

Fans were quick to praise Alexander-Arnold after a stunning performance…

jesus, that cross from Trent

Watching that back, what a belter of a cross from Trent. We’ve missed him.

Trent has just produced one of the best 45 minutes I've seen by a Liverpool full-back. Really outstanding.

Trent Alexander-Arnold, aside from setting Mane's goal up with a pinpoint cross, has started like an express train. It was plain to see at Old Trafford but it's even more apparent how much he was missed.

“Absolutely beautiful cross, how much did we miss this at Old Tafford. Wonderful Trent!”- Incognito on the forums.

Since Coutinho left, Trent has been our best conventional playmaker. And I don't even think it's close.

Trent, again, sensational! A hat-trick of assists to his name. Easily the best game he’s had in a Liverpool shirt.

“Trent is so so important to how our attack functions, Fucking pearls x3”
– lluvatar on the forums.

Trent has just had one of the best halves of football I’ve ever seen in my life. From anyone. Incredible.

As good as I’ve seen TAA play. Real confidence to his forward movements. Use of the ball has been excellent and delivery on goals was of highest quality

But it was plaudits all round as Liverpool dominated proceedings…-

He’s not scored but Salah back on it tonight.

“Fabinho is bossing this.

I’ve been waiting for a midfielder to do this for some time.” – Noo Noo on the forums.

Trent the MVP of the half with Fab close behind. VVD a colossus again until a lapse at the end there.

Is Milner playing in EVERY position?

He fucking deserves that. What a strike. What a goal. What a performance. Divock. Origi. ???

Great stop from Alisson. Had a very good night so far.

Fabhino is a fuckin baller, brilliant player, and don’t even get me started on Virgil Van Dijk. Tell Southampton they can have another 70 million.

A dominant demolition job. Mané again proving the trigger. Milner everywhere, freed up by a ridiculously disciplined Fabinho. TAA & Robertson the best full-backs in the division by some way. Van Dijk a colossus. Some statement. Calmness personified. Top of the league. #LFCdigest

Lots of questions asked about #LFC's forwards after their recent dry patch, so that result represents a perfectly timed response. Braces from Mane and Van Dijk, but I thought Fabinho was the best player on the pitch – starting to show his quality consistently now.

Big credit to Jürgen for playing Sadio central and Divock wide left allowing Mo to stay right. Worked well for all three of them tonight.

“That’s 4 clean sheets in a row now and the attacking play was sensational tonight.

We played like a team that had been given a bollocking after Sunday. Great response and a massive statement to everyone.”- Billy Biskix on the forums.

Worried about the midfield’s creativity before the game. Who needs midfield creativity when your right back is a baller?!

And fans were left to question ‘what nerves?’ as the Reds remain top of the league…

Convincing win for #LFC. Some exceptional individual performances. Watford offered little but there were no signs of nerves.

These title nerves really seem to be affecting Liverpool…

9 more of those, 19 will be ours#BeatTheDrossWinTheLeague

What a massive performance that was. All players excellent.