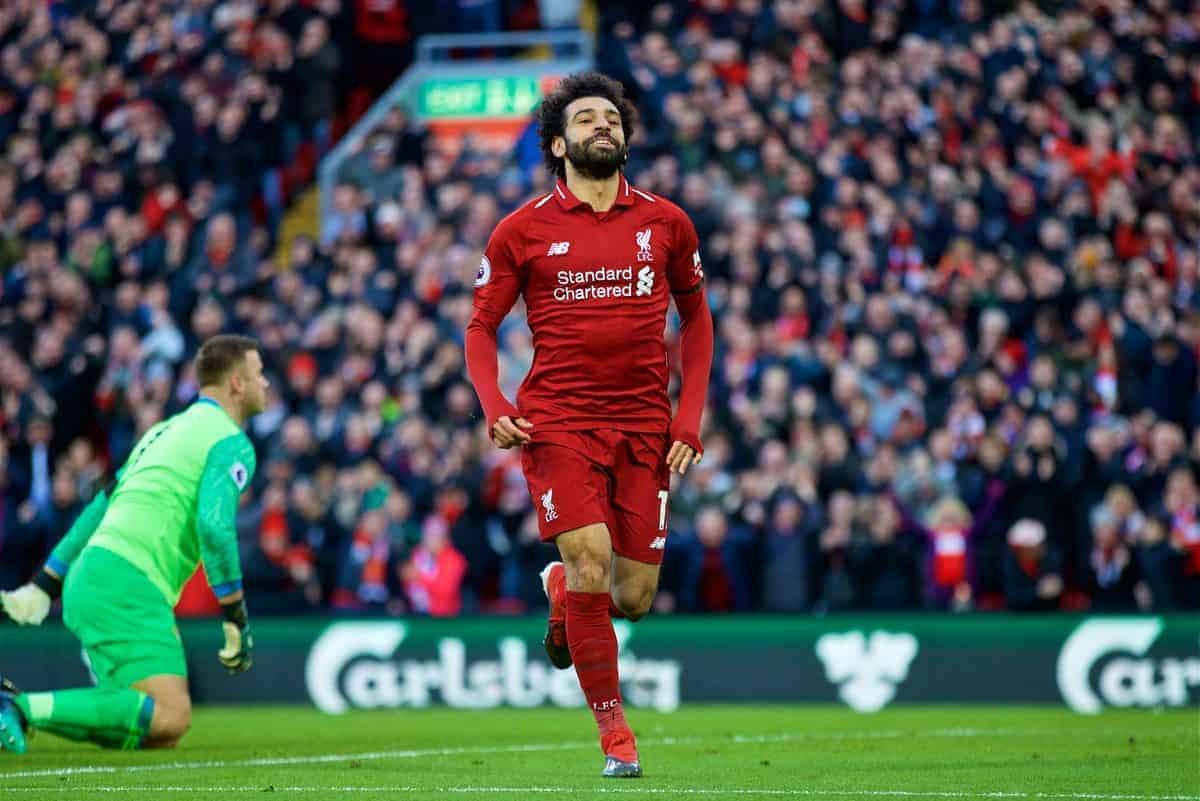 Liverpool cruised to an imposing 3-0 win over Bournemouth on Saturday afternoon, with relieved supporters gushing over a stunning team performance.

The Reds returned to their sparkling best at Anfield, bouncing back from consecutive draws to return to the top of the Premier League.

Sadio Mane got the ball rolling with a clinical header—the fourth game in a row in which he has scored—before Gini Wijnaldum netted a sumptuous lob to double the lead.

Mohamed Salah‘s 49th league goal for Liverpool made it 3-0 early in the second half, finishing off a superb team move in style.

It was a vital three points in the title race and supporters reacted to the result on social media and our forums.

The Kop doing their job in the early stages. The @LFC team not so much. @afcbournemouth's 4-5-1 comfortably keeping them at bay so far

Incredible levels of pressing from #LFC in the opening minutes. A good atmosphere is helping with that.

Much better here. Good pressing and movement. Bournemouth being stubborn but keep this up and they'll crack.

Fabinho was a key presence throughout, particularly on the ball…

Fabinho really impressive so far. Great use of the ball.

“I think I love Fabinho.”

Fabinho is out here passing like a deep lying Fabregas. Love it.

Fabinho is just pure class isn’t he, so so good #LFC

“I don’t want Fab to ever come out of the side.”

Fabinho terrific so far. Midfield has been superb in general.

The influence of returning hero Wijnaldum did not go unnoticed…

We are Gini Wijnaldum Football Club. #Liverpool ????? we would be 7 clear if he was fit for Leicester and West Ham. His influence cannot be underestimated.

“Can’t say it’s Wijnaldum totally but he seems to be having a positive impact.”

Big difference today with Wijnaldum back ?

“Gini has made a huge difference.”

– RJK on the forums.

What a difference Wijnaldum makes to that Liverpool midfield. He's turned into a proper baller! Balance, composure and drive on the ball. #LFC

An hour down, and Naby Keita now on two hockey assists and a press leading to a goal.

But don't worry — he's still a flop and, of course, behind any number of obscure PL midfielders in goals and assists

Naby Keita is beginning to find his rhythm; his passes are more adventurous, he’s playing quicker. Bournemouth, admittedly, are standing off him but this is a prime chance to build his confidence ?

Big bear hug for Naby Keita from Jurgen Klopp. That was a massive step forward for the Guinean midfielder today. #LFC

Fans highlighted the importance of the win, particularly the authoritative nature of it…

Just what Liverpool needed this weekend. One of their best performances of the season and a clean sheet. Could have been a lot more than three. 10 day gap until Bayern now.

3-0. Could have been a lot more. LFC very good today. Thought the midfield 3 of Keita, Wijnaldum and Fabinho were superb. Also really lively performance from Firmino. Salah excellent in second half

Crucial 3 pts. Important to get back to winning ways. Anfield less tentative. Far better all round. Could have had many year but a clean sheet is a bonus. On we go.

“They proved that they are not nervous,edgy and pressured.”

See, we’re still absolutely boss. Now will you all just chill out and enjoy it.

Exactly what was needed. Composed, confident, dominant display. Every man knew his role today and executed it to a tee. Wijnaldum showed just what he gives this Liverpool side. Huge win. #LFCdigest

“Exactly the performance and result we needed.”

An #LFC performance driven by defiance, infused with control, confidence and clarity against the backdrop of a brilliant atmosphere. An authoritative way to respond and return to the top.

Lots of positives. We moved the ball & attacked quickly, defended well & looked angry. A real intensity in our play.

3 points clear at the top of the league. Does that mean our “crisis” is over now? #LFC #LIVBOU

Is he fuck. The Reds mate.

I’m confused. How can we be top? I thought City won the league against EFC? #LFC