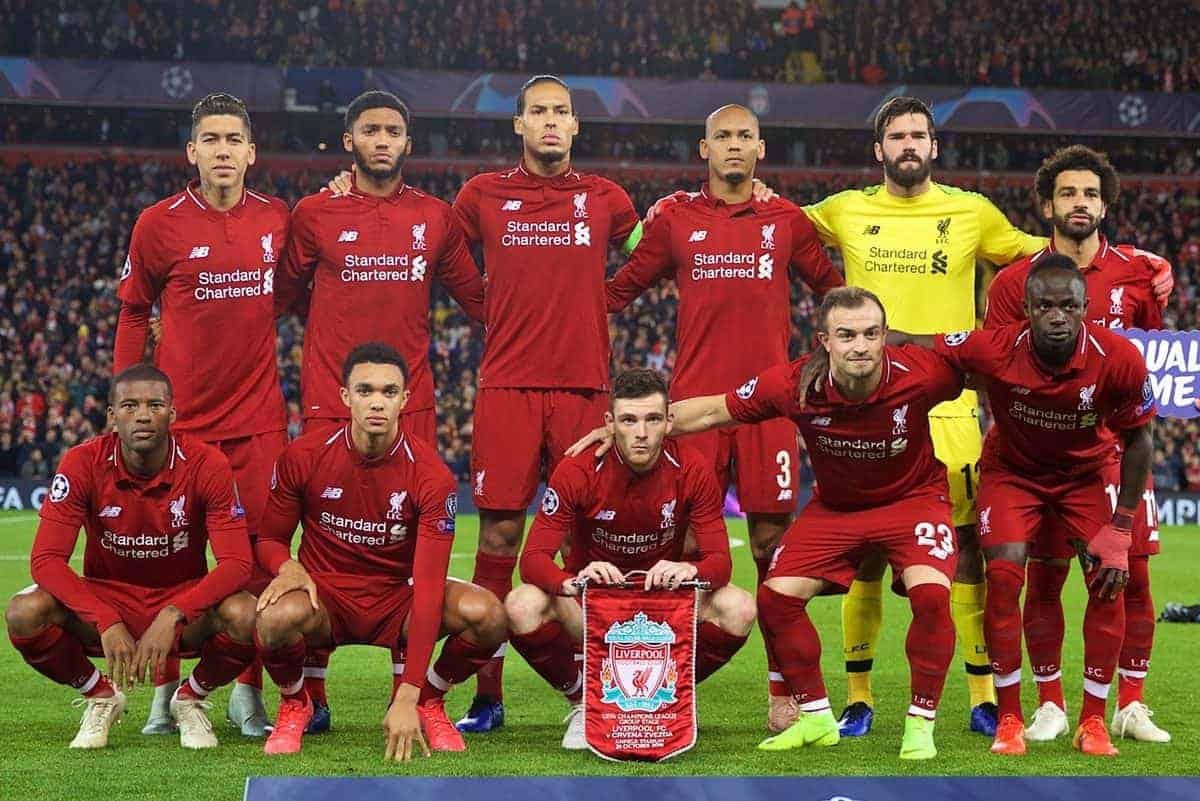 Mounting injuries and absences could force Jurgen Klopp to several areas of his starting XI for Liverpool’s last-16 first leg against Bayern Munich.

A huge week in the campaign kicks-off with the arrival of the German giants for the first leg of a mouth-watering clash.

The Reds have had a useful 10-day break to prepare, and having returned to winning ways against Bournemouth, confidence will be high among the squad.

All is far from perfect coming into the tie though, as Klopp will be without several defensive options, leaving the boss needing to patch up his back-four.

That could then result in changes being made in midfield too, while, most worryingly, alterations could yet also be forced in attack.

So how could Liverpool’s starting XI look on Tuesday night?

A defensive crisis is on Klopp’s hands with only one senior centre-back currently available – that being Joel Matip.

Virgil van Dijk is suspended, Joe Gomez is out for the foreseeable future and Dejan Lovren still hasn’t trained after another hamstring injury.

The Croatian will be monitored but isn’t expected to start, meaning Fabinho will deputise alongside Matip.

A fresh concern has arisen with Roberto Firmino, who is suffering with a virus and missed training on Monday as a result.

Better news is that Klopp confirmed in his pre-match press conference that Gini Wijnaldum trained and “looked really well” after illness.

Xherdan Shaqiri has also trained and should be available after missing the Bournemouth win with an abdominal strain.

Elsewhere, fit-again Jordan Henderson should return to midfield, especially with Fabinho at centre-back.

Trent Alexander-Arnold is in for a recall at right-back, while Naby Keita will be hoping to keep his place against opponents he knows well as he continues to play his way into form.

Daniel Sturridge and Divock Origi – as well as Shaqiri – provide the options to potentially replace Firmino.

Klopp will be hoping for a slice of luck from the football gods for a late boost with both Firmino.

The most likely reshuffle is that Henderson enters back into his holding role, with Wijnaldum and Keita operating as the more advanced pairing.

If there is better luck with Firmino, the traditional front three will be deployed and Liverpool’s starting XI will look like this in a 4-3-3 system. 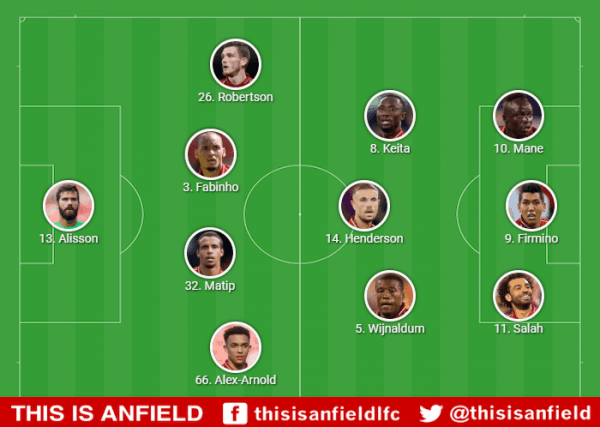 Lovren will be given every chance to prove his fitness and if he does, the Croatia international will enter alongside Matip to give Liverpool a full defence.

In turn, Klopp would then be handed the possibility to field what is showing signs of becoming the Reds’ best midfield trio.

Fabinho would of course stay in defensive-midfield, providing the safety net behind the adventurous pairing of Wijnaldum and Keita.

It was this trio that shone in the dominant Bournemouth victory, and handing that same unit a chance on the biggest stage would be most welcome.

What is gained in defence and midfield could yet partly be lost in attack if Firmino does end up missing out.

Sturridge and Origi will both be hoping for a chance – potentially one last – on the big occasion.

But a more suitable scenario to retain speed and explosive in attack would be for Shaqiri to play on the right, with Mohamed Salah central. 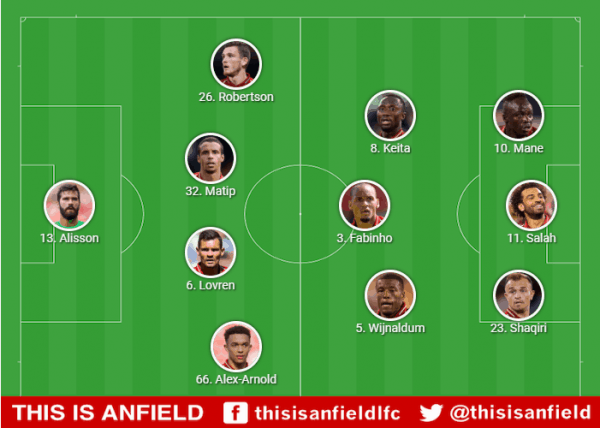 A lot with Klopp’s selection on Tuesday hinges on the late availability of Firmino and Lovren, which could ultimately prove decisive to Liverpool’s success against the German giants.

Regardless of who makes the lineup, the Reds must produce another full-throttle display to establish an all-important first-leg lead to take to Munich in three weeks’ time.