Stastically, Liverpool are on course to finish the season with 92 points – which would be a club record, and enough to have won the title in 17 out of the last 23 seasons. Infogol explain the stats.

Liverpool entered the final international break of the season with a two-point advantage over title rivals Man City following an edgy but ultimately deserved win over Fulham, but the Reds have now played a game more than the reigning champions.

Although they sit top of the table, the Infogol model currently gives Liverpool a 35 percent chance of lifting the Premier League trophy, and Infogol’s Jake Osgathorpe takes a closer look at the stats surrounding the Reds, and just how good this 2018/19 team is.

Infogol is a revolutionary new football product, which harnesses Opta data to power a proprietary Expected Goals (xG) model, which can both analyse results and predict outcomes of forthcoming matches.

Interestingly, Liverpool have four home games left to play in their seven matches, while City must hit the road five times in their last eight, which should give grounds for optimism given Liverpool’s record at Anfield.

Of those remaining seven matches, Infogol calculates that the most difficult game is their next one, at home to Tottenham, but the Reds still have a 71 percent chance of getting the three points.

Chelsea at home (72% chance of winning) and Newcastle away (73%) are the two next most difficult matches.

City and Liverpool are streets clear of their rivals, but City have been better than the Reds in terms of underlying process, having been both the best attacking and defensive team in the league according to xG.

In their 30 league games this season, City have generated an average of 2.52 Expected Goals For (xGF) per game, which is actually an increase on their record-breaking 2017/18 season (2.32 xGF per game). 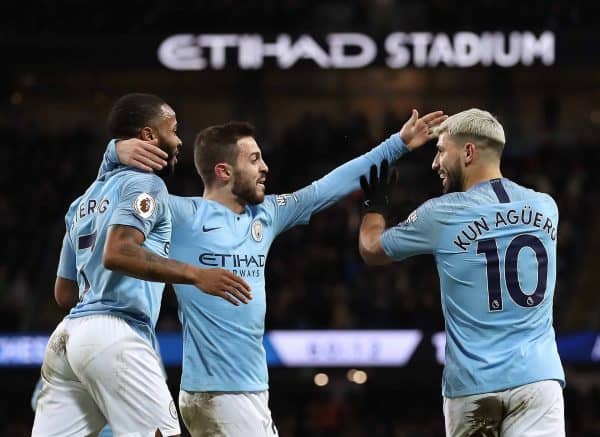 Defensively they are averaging an impressive 0.79 Expected Goals Against (xGA) per game, which is only a small increase on last season’s figure (0.73 xGA per game), which all adds up to something that will be a huge worry for the rest of the Premier League and Europe: City have got better.

City face Fulham and Cardiff next, where they will be expected to pick up maximum points, but they then have a tough test away at Crystal Palace, where the model predicts a 65 percent chance of a City win – a game that also comes in between their Champions League quarter-final ties with Tottenham.

As well as this, City have to travel to Man United, with that game being the toughest of the remaining fixtures for Pep Guardiola’s side (48%), and comes in the midweek after playing Spurs in the league.

All of this adds up to what will no doubt be a thrilling climax to the season, and one of the best title races we will have witnessed for some time.

The below graphic shows the spread of points each team could accumulate and how likely each points tally is:

So, Liverpool’s most likely final points tally is 92 and Man City’s is 93, while our simulation has City winning the goal difference tiebreaker much more frequently if the points do end up tied.

Let’s focus on Liverpool for a minute.

What they have done this season deserves a lot of credit, whether they win the league or not, and Jurgen Klopp deserves plenty of plaudits for ensuring the Reds are still competing with such an impressive City side at this stage of the season.

This is Klopp’s third full season as Liverpool manager, so let’s see just how much they have improved: 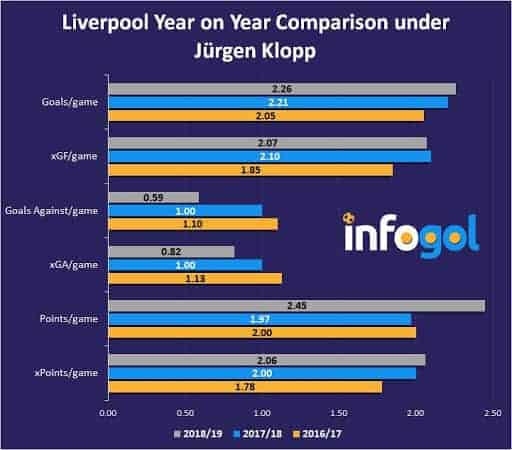 The biggest improvement in terms of Liverpool’s process came in the 2017/18 season, in which Liverpool were actually the second-best team in the Premier League according to xG, despite finishing fourth.

That defensive improvement added to the attacking prowess that Liverpool possess, as can be seen in the Rolling xG graphic below, has cemented their place as one of Europe’s elite. 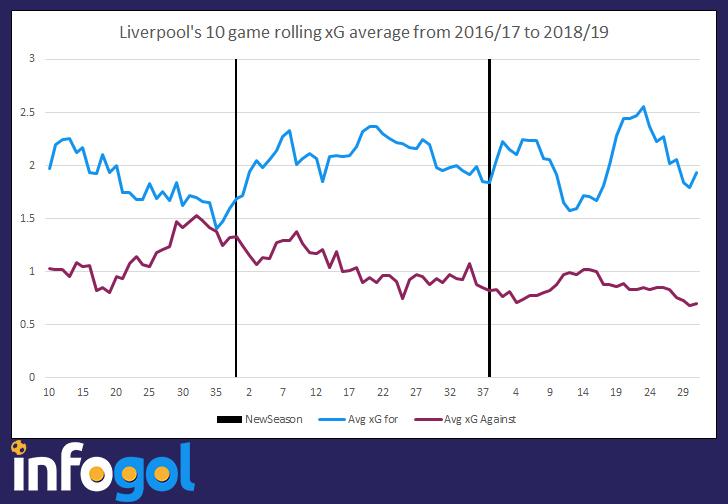 So just how good is this Liverpool team? 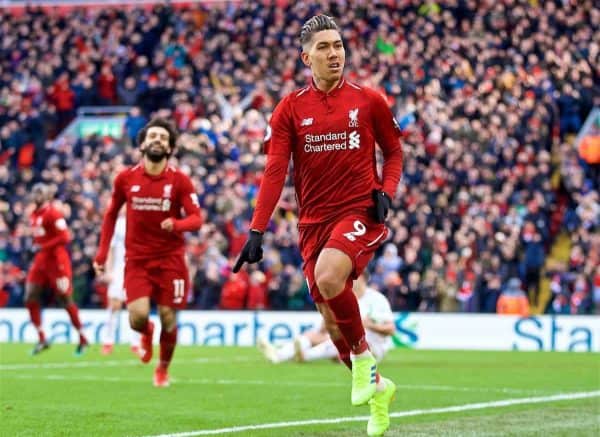 How does this Liverpool team rank compared to previous Premier League seasons?

To calculate this, we have taken the proportion of points won by each champion across the Premier League seasons (going back to 1995/96).

Simulating the remaining matches of the season, we get an average of 1056.5 points across all teams this season. Using the Infogol xG model, Liverpool accumulate around 91.8 xPoints, which means the proportion of points expected to have been won by the Reds is 8.62 percent.

Proportion of points won by past Premier League Champions 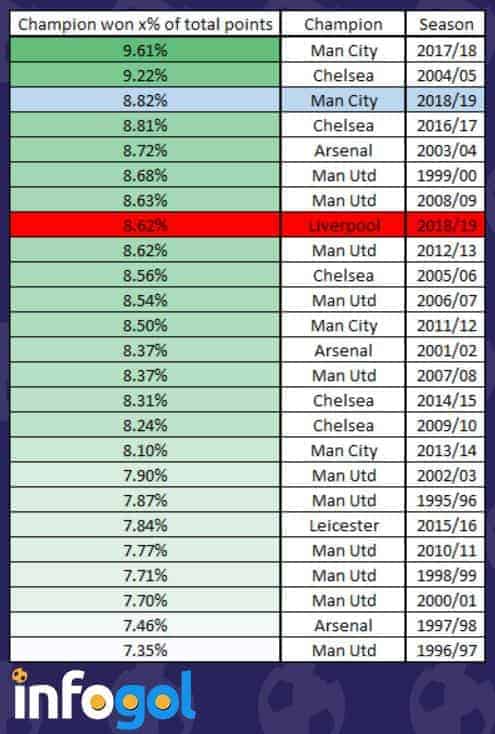 In the list of previous champions seen above, barring this season’s City team, Liverpool would sit fifth, showing that in the majority of the other Premier League seasons, Liverpool would lift the trophy – 17 out of the last 23, in fact!

As well as being right in the hunt for Premier League there’s also the small matter of the Champions League.

Liverpool impressed last time out, beating Bayern Munich to qualify for the quarter-finals, and they have now been drawn against Porto, who they thumped 5-0 on aggregate last year.

Liverpool are heavily fancied to progress to the semi-finals, with Infogol giving them a 75 percent chance of advancing. If they do indeed get through that game, Liverpool will play either United or Barcelona.

As things stand, the Infogol model gives Liverpool a 16 percent chance of going one better than last season and winning the Champions League.