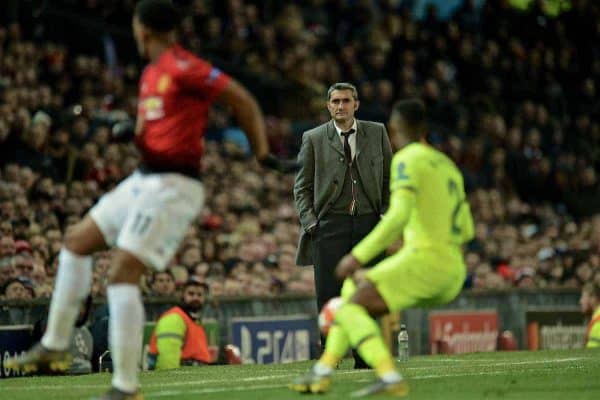 Barcelona manager Ernesto Valverde has acknowledged that his side face a huge test in the Champions League semi-finals thanks to Liverpool’s strengths.

The Reds will face LaLiga’s top team over two legs as they bid to reach a second successive European final.

With stars such in their team as Lionel Messi and Ivan Rakitic, as well as former Liverpool duo Philippe Coutinho and Luis Suarez, Barca represent a formidable threat.

But the Reds have become a superpower in their own right over the past couple of years and the manager of the Camp Nou side has acknowledged as much.

Speaking in a press conference ahead of his team’s weekend league match against Real Sociedad, Valverde spoke of how good the Reds’ attackers have been and their progress under Jurgen Klopp.

“Liverpool are a very powerful opponent. Offensive players have been showing their potential in the last two years.

“Last year they reached the final. This time they’re having a great tournament. They are also fighting in the Premier League.

“It’s a very attractive game for them, for us and for the public. It will be very hard, for them and for us.

“The final is just there and we’ll give our best to reach it.”

Barca have almost wrapped up the title in Spain and will likely rotate across the coming week or so, facing Alaves (away) and Levante (home) before the first leg against Liverpool.

Their only league fixture before the second leg is away to Celta Vigo, who are fighting against relegation—though the title may well be wrapped up by then.

While the Reds are aiming for a domestic and European double, Barcelona are hoping to go one better, with a Copa del Rey final also on the horizon.

Before that, though, the Reds still have a big job ahead to ensure the points are still racked up in the Premier League.