Loris Karius was in top form and Liam Millar enjoyed a special moment with a first senior start on a much-improved weekend of action for Liverpool’s loanees.

Game time has been in short supply for the borrowed Reds, but this was one of the most fruitful spells of the season as patience was rewarded.

Anderson Arroyo could yet join the action as the Gent U21s face Sporting Lokeren on Monday night.

Here’s the full lowdown on all action from a productive weekend for the loaned men.

Karius was in superb form…

Karius has made a great habit of responding to his critics with top-level performances between the sticks for Besiktas.

The German did it again on Sunday, producing a fine shot-stopping display including a penalty save to help his side to a 4-1 victory over Ankaragucu to keep title dreams alive.

Karius pulled off several top stops in the first half to keep his side in the game—two particularly catching the eye as he spectacularly kept out efforts with diving saves at full stretch.

After the break Karius delivered the penalty save—denying Tyler Boyd by diving to his right to parry the spot-kick before the visitors failed to convert the rebound.

Unfortunately, Karius’ heroics proved in vain as a retake was awarded and he was beaten at the second attempt.

???? with our fans everything is possible. Bring on the next game! #LK1

It didn’t matter though as Besiktas ran out clear victors to record a sixth straight win thanks in no small part to Karius’ superb showing.

There was a special moment for Millar…

It has been a long time coming after nine sub appearances, but Millar finally enjoyed a moment to remember with his first professional start for Kilmarnock.

It could not have come at a tougher venue, with manager and former Reds first-team coach Steve Clarke introducing the striker for a big game at Celtic.

Millar featured not in his natural position, but on the left wing as Clarke deployed a 4-4-2 formation.

Even though it was always going to be a difficult afternoon for Kilmarnock, which ended in a 1-0 loss, Millar still made a good impression.

The Canadian particularly caught the eye with his pace and directness out wide as he regularly beat Celtic full-back Mikael Lustig.

Millar can certainly reflect positively on his long-awaited first start and hopefully it persuades Clarke to hand him another next time out. 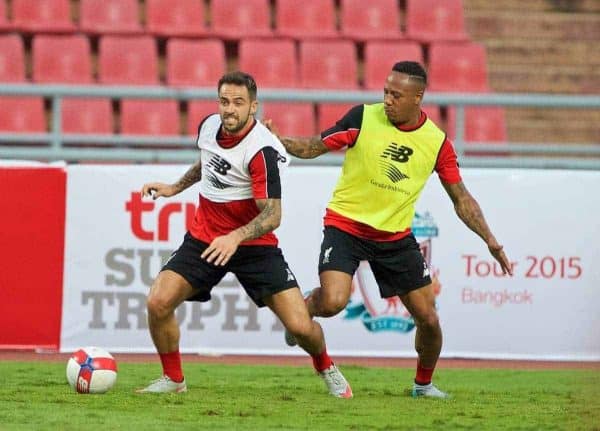 There was a battle of the loanees on Saturday as Danny Ings‘ Southampton hosted Nathaniel Clyne‘s Bournemouth.

The spoils were shared in an exciting 3-3 draw at St Mary’s, where both Reds played as Ings’ Saints earned a crucial point to mathematically secure Premier League survival.

Ings played 81 minutes and delivered a good performance, while Clyne too started after recovering from a hamstring injury to feature.

All three Football League loanees featured, with two picking up positive results in their respective push for playoff finishes.

Harry Wilson helped Derby take a big step towards securing a place in the Championship playoffs with a 2-0 win at promotion-chasing rivals Bristol City.

The Welshman was moved back out to the left wing by boss Frank Lampard, and it resulted in a quiet individual performance as Wilson lacked his usual playmaking influence.

In League One, Herbie Kane‘s Doncaster edged closer to a top-six spot after a hard-fought 2-2 draw at Oxford, with the goalscoring midfielder playing the 90 minutes.

It wasn’t quite as an intense weekend for Ovie Ejaria after he helped Reading secure Championship status last week.

Enjoying a pressure-free game by contrast, Ejaria featured in a 2-1 loss at Middlesbrough but he was influential despite defeat, with the most touches of any Reading player (86).

North of the border, Ryan Kent was back in Rangers’ starting XI against Aberdeen after serving a two-game suspension.

It was a quiet return for Kent—who has been voted the Gers’ Young Player of the Year by the Ibrox faithful—as Steven Gerrard’s side claimed a 2-0 victory.

The theme of increased action spread to those Reds out on loan around the globe.

There was a rare but welcome outing at Stade de Reims for Sheyi Ojo, who featured competitively for the French club for the first time since January in a 1-1 draw against Angers.

Ojo was introduced for the final half-hour and was in lively form on his comeback, firing one shot on target and producing a key pass.

Taiwo Awoniyi has yet to rediscover his goalscoring touch for Royal Excel Mouscron since returning from injury.

The Nigerian failed to find the net for a fourth successive outing—a run spanning pre- and post-injury—as his side made it six games without a win after a 3-2 loss to Kortrijk.

However, Awoniyi was still influential as he won the penalty which allowed Mouscron to take a 1-0 lead.

Kamil Grabara continues as AGF Aarhus’ No. 1 and was between the sticks as his side secured a fifth straight win with a 3-1 success over Horsens.