Harry Wilson and Marko Grujic were on the scoresheet while Ovie Ejaria grabbed an assist to complete a fantastic weekend for Liverpool’s loanees.

This was one of the best spells of the season as several borrowed Reds hit top form to deliver goals, assists and several impressive performances.

Eight loanees missed out on all the fun, including Ryan Kent (suspended), Adam Bogdan, Sheyi Ojo (both unused), Taiwo Awoniyi and Herbie Kane (both injured).

Danny Ings and Pedro Chirivella were both ineligible to feature, while Anderson Arroyo had no game for the Gent U21s.

Loris Karius could yet join the action when Besiktas take on Rizespor on Monday night.

Those who featured were in excellent form though, and here’s the full lowdown on all events.

Wilson was back to goalscoring form with a bang…

You wait 12 games for a goal and then two come along in one!

That was the case for Wilson on Saturday as he emerged from his rough patch in style with a superb brace in Derby’s eventful 3-3 draw at Brentford.

Wilson broke his duck on 13 minutes with a finish of a man in top goalscoring form rather than a drought—a crisply struck, low drive from the edge of the box to make it 1-0.

The second came 12 minutes from time to restore the Rams’ lead at 3-2, and it was a classy goal all round.

Wilson’s brilliant out-to-in run was found by a defence-splitting pass, and he produced a great first touch to cut across the defender and set himself for a shot which curled into the far corner.

Brentford found a late equaliser five minutes later to deny the Welshman the match-winning plaudits—and Derby a big three points in the push for a playoff place.

Disappointed to only take a point yesterday but happy to get back on the scoresheet????? congrats @jaydennbogle on your first goal? away fans brilliant again????

However, Wilson will be delighted to have finally got the rewards that his displays have deserved.

He now has a hugely impressive 14 goals to his name this season, alongside four assists.

Hertha Berlin’s form in the second half of the season may have plummeted, with just three wins from 12 competitive games since the turn of the year.

But Grujic’s certainly hasn’t, even after suffering the heaviest defeat of his senior career last week.

The Serbian has been a shining light while his side have struggled, and he was once again on Saturday, scoring his second in five games in a 2-1 loss to Fortuna Dusseldorf.

Operating in a box-to-box midfield role, Grujic dragged his side level at 1-1 just before half-time—tapping home from inside the six-yard box after making a nice, late run from midfield.

Unfortunately, Hertha failed to push on from Grujic’s equaliser and instead conceded in the second half to suffer a fourth straight defeat.

Despite Hertha’s poor form—which has taken them to 11th in the Bundesliga—Grujic can reflect positively on his own display as he netted his fourth goal of the season in 18 outings.

Ejaria continued his good form with an assist…

Ejaria has grown into an increasingly influential player for Reading, building on the flashes of brilliance shown in his early arrival with consistent performances.

The midfielder continued this good form with another impressive display despite a 3-1 loss at Hull, in which he grabbed his second assist for the club.

It was a simple one, as Ejaria passed square to Lewis Baker, who did the hard work creating space before lashing home a stunning long-range strike.

More pleasing than the setup was Ejaria’s overall display while operating in the No. 10 role.

The youngster stood out as Reading’s main creative source, delivering the joint-most key passes (two) and completing the most dribbles (four).

After a tough spell at Rangers it is pleasing to see Ejaria back in form, and hopefully it inspires a successful end to the season as Reading fight for Championship survival.

Four more Reds were in action across the weekend… 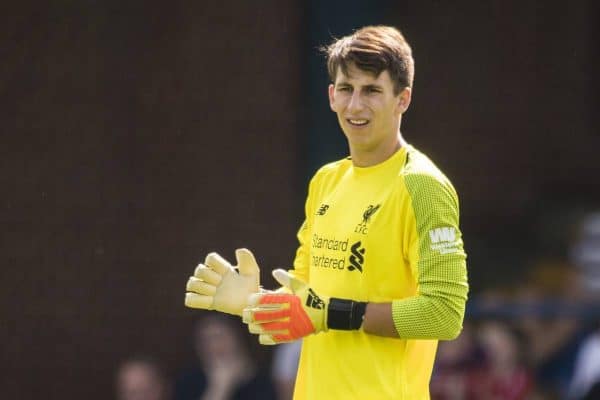 One of the most pleasing performances of the weekend was that of Kamil Grabara at Danish side AGF Aarhus.

The Polish stopper suffered a nightmare against Velje BK last time out, costing his side victory as he was at fault for both goals resulting in a 2-2 draw.

Grabara therefore came into Friday night’s clash with Horsens under pressure and needing to respond positively in the first major test of his senior career.

Pleasingly, the 20-year-old did just that, showing a strong mentality and real maturity to bounce back with a faultless performance and a clean sheet in a 3-0 win.

Allan Rodrigues was the only other overseas Red to play, that coming in Fluminense’s crucial Carioca Serie A semi-final clash against Flamengo.

It was arguably the biggest game of Allan’s career at the historic Maracana Stadium, but it ended in disappointment as his side could only manage a 1-1 draw resulting in a painful elimination.

Allan entered as a second-half sub and went close to making it 2-0 with a long-range stunner before Flamengo struck the vital equaliser and tie-winning goal.

In the Premier League, Nathaniel Clyne endured his worst performance for Bournemouth in the Cherries’ dreadful 3-1 home loss to Burnley.

The usually reliable right-back started the defeat in his normal position but was hauled off at half-time after being given the run-around by Burnley winger Dwight McNeil.

In the Scottish Premiership, Liam Millar‘s wait for a first start at senior level goes on at Kilmarnock, but he at least continues to enjoy some game time.

Millar made his ninth sub appearance for Steve Clarke’s side in a 2-0 win over St Johnstone, playing the final 20 minutes of the victory.