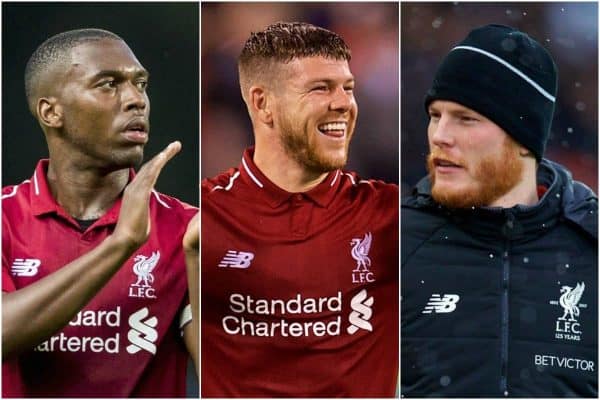 Liverpool have released their Premier League retained list, which confirms those who are departing the club this summer.

It was announced earlier in the week that senior duo Daniel Sturridge and Alberto Moreno are leaving upon the expiration of their contracts, with Jurgen Klopp paying tribute to both players.

There will also be a clutch of Academy players departing the scene, as well as two players with first-team appearances to their name.

Goalkeeper Adam Bogdan, who signed in 2015, leaves after playing six senior games for the Reds. He spent 18/19 on loan at SPL side Hibs.

Connor Randall, who plays at right-back and in midfield, will also leave Liverpool, with eight appearances to his name.

Five players based at Kirkby who are leaving on free transfers are Juanma, Conor Masterson, Glen McAuley, Corey Whelan and Ben Williams.

None made a senior appearance, though centre-back Masterson was on the bench twice last season, against Everton in the league and Man City in Europe.

Furthermore, the club have offered contracts to five players who are without a senior game to their name: Bobby Adekanye, Daniel Atherton, George Johnston, Abdi Sharif and Edvard Tagseth.

Johnston played a friendly last summer for Jurgen Klopp‘s team, but it is expected that at least some may depart regardless of the offer of terms.

Lazio have been heavily linked with a move for Adekanye and the forward has already said his goodbyes to fans via social media.

However, the Reds offering him a contract means the Italian side would have to pay a fee to secure his registration for next season.

Tagseth looked a promising young talent under Steven Gerrard’s tutelage in the U18s, but struggled with injuries throughout 18/19.

This Is Anfield wishes all the departing players well for the next stage in their careers!