Jurgen Klopp has explained the thinking behind Adam Lallana‘s latest role change, insisting that with “a bit of luck” he could be Liverpool’s Jorginho.

Lallana was among the first group of players to return for pre-season training this summer, after a short break following a campaign that saw him make just six starts.

The 31-year-old has barely featured for the club in the past two seasons due to persistent injury problems, effectively vacating a key role in Klopp’s squad as the Reds evolved without him.

He now finds the likes of Gini Wijnaldum, Jordan Henderson, Naby Keita, Alex Oxlade-Chamberlain and James Milner ahead of him when it comes to his advanced position in midfield.

And in Liverpool’s first two pre-season friendlies, he has instead operated as a No. 6 behind Oxlade-Chamberlain and Milner, playing 90 minutes in his new role.

It is arguably the biggest surprise of the Reds’ warmup schedule so far, and speaking after Sunday’s 3-1 win at Bradford, Klopp claimed it was designed to both allow Lallana to recapture “rhythm,” and provide “another option.”

“Adam is this kind of player, he can play that and obviously enjoys it a lot, this ‘Jorginho’ role,” he told reporters.

“I hope Maurizio Sarri doesn’t see the games, otherwise he will probably make an offer!

“So it’s about getting Adam the rhythm, bringing him in and giving him the things he’s naturally good at.

“Small spaces, keeping the ball, passing the ball, and then from time to time offering the runs in behind as well, especially together with Milly that’s possible.

“But it’s just another option for us.”

While it can be argued that his overall game is not entirely suited to Liverpool’s current approach—particularly in his tendency to slow down play—Lallana’s biggest flaw in recent years has been his fitness.

This will remain a key caveat when discussing the England international’s use this season, as this time last year he played more than half the amount of minutes in pre-season (315) than he managed in the campaign proper (568). 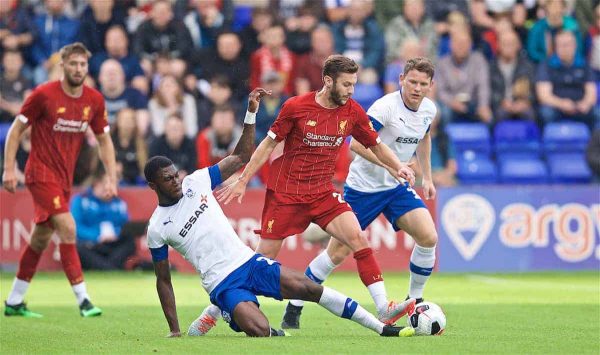 Klopp acknowledged this, emphasising that Lallana needs “a bit of luck” to ensure he can provide cover for Fabinho at the base of the midfield.

“A bit of luck now, how we all need in life, it’s true,” he continued.

“We have to come through without injuries, that would be cool.

“If that’s good, then we have a couple of new players this season, I would say!”

In the final line Klopp is, of course, referring to the likes of Lallana, Oxlade-Chamberlain and Rhian Brewster, who all spent much of last season on the sidelines.

There should still be a measure of caution when assessing Lallana’s prospects in particular, not only due to his wavering fitness, but also given Daniel Sturridge played most of last pre-season as No. 10 and barely did after.