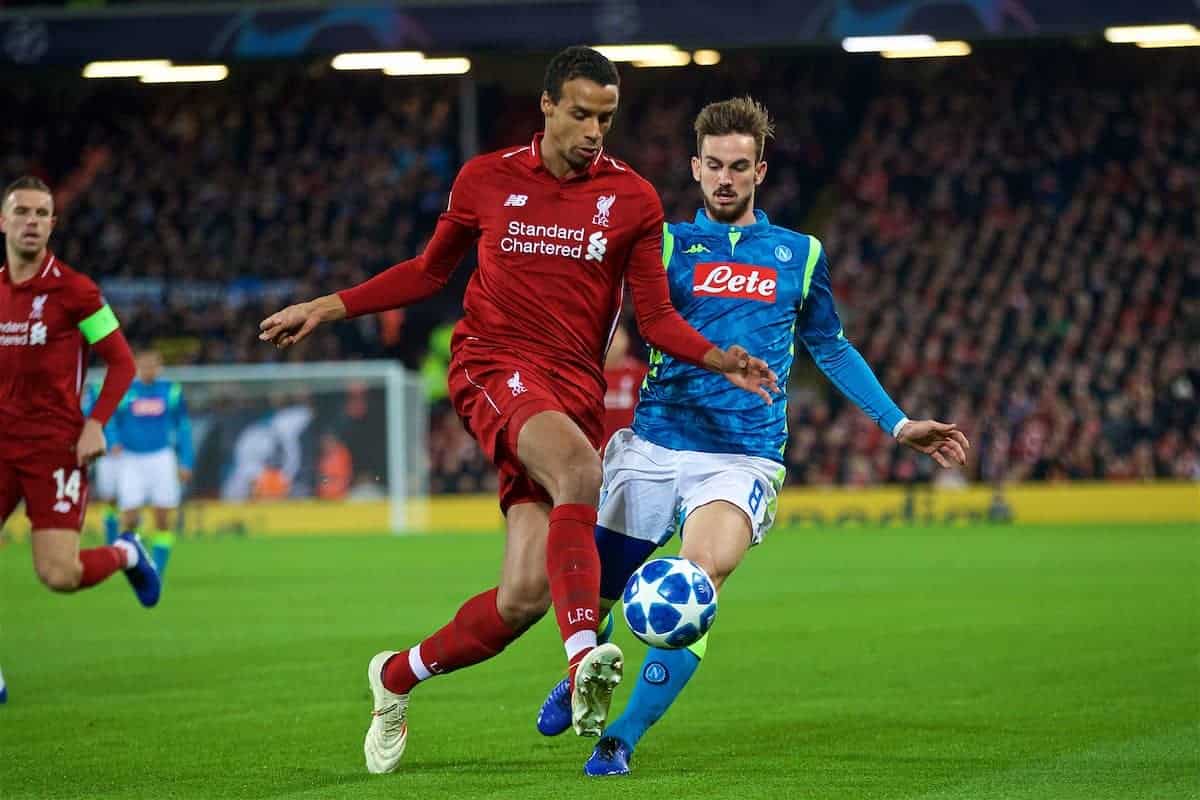 Liverpool’s penultimate pre-season friendly prior to the 2019/20 pits Jurgen Klopp‘s side against Napoli at Edinburgh’s Murrayfield Stadium.

The Reds head into the meeting with the Serie A side without a win in their last three summer friendlies in the US, having fallen to defeat against Dortmund and Sevilla while sharing the spoils with Sporting CP.

Napoli are no strangers for Klopp and his men having met on three occasions last term, which included a pivotal Champions League group game which sent the Reds on the road to Madird.

But the two teams find themselves in a similar situation on the domestic front in 2019/20 as both sides finished as runners-up last term, where Napoli will look to topple Juventus next term and Liverpool will seek the same over Man City.

The game on Sunday (5.00pm BST) will provide another chance for the Reds to test themselves against quality opposition and to rediscover the winning feeling heading into the last of seven summer friendlies. 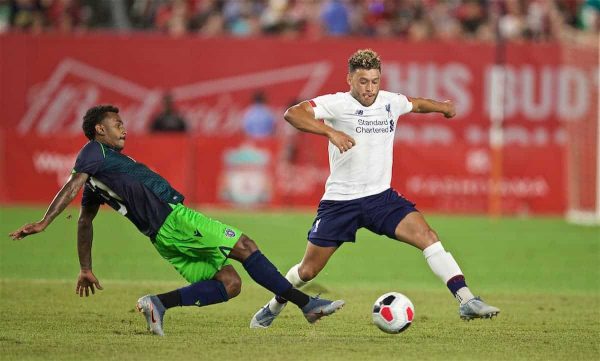 Klopp is not expected to name any new faces in his team on Sunday as he continues to await the arrival of a host of senior figures.

Naby Keita and Xherdan Shaqiri are still on the comeback train as they recover from respective adductor and calf injuries.

While Mohamed Salah, Roberto Firmino and Alisson are all expected to return on Monday where they will link up with the rest of the team for the training camp in France.

It means the Reds are likely to field a team not too dissimilar from the one who clinched a 2-2 draw against Sporting CP in New York.

As such the Reds will again be without defensive duo Nathaniel Clyne and Yasser Larouci through injury, and although the latter did not suffer serious damage in the reckless challenge against Sevilla, he is unlikely to be risked.

There is concern, however, over Alex Oxlade-Chamberlain after Klopp revealed the midfielder is being plagued by a calf complaint, and after spending much of last season on the sidelines a decision on his availability may be made late on Sunday. 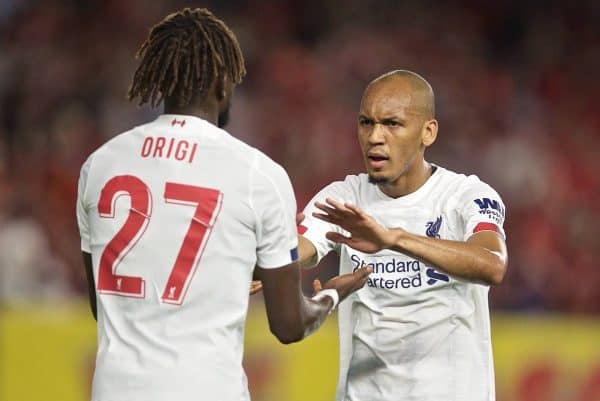 Adam Lallana made a late appearance at Yankee Stadium to help ease fears over his fitness after sitting out the first two fixtures in America with a dead leg, and could again be handed more minutes on the field.

With building the teams fitness still a priority, the clash at Murrayfield may see the manager continue to push members of his team closer to the 90 minute mark, which would squeeze out a number of youngsters.

Simon Mignolet, Fabinho and James Milner featured for the entirety in the last game, while Joel Matip was withdrawn with a minute remaining.

Such a move could see Virgil van Dijk and Joe Gomez given a longer runout which would simultaneously limit Sepp van den Berg to a potential cameo appearance once more after making his debut against Sporting with moments to spare. 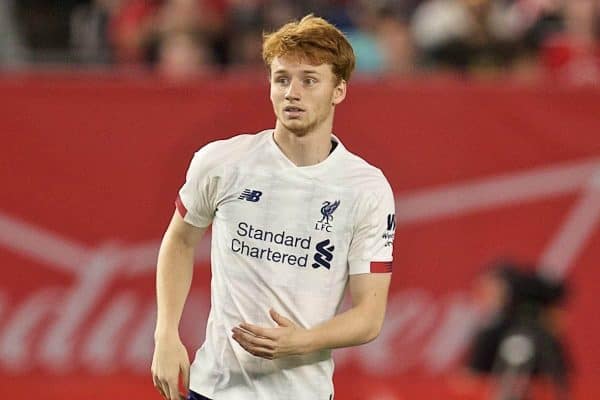 Carlo Ancelotti’s side have looked to push on from their second-place Serie A finish in season 2019/20 having bolstered his squad throughout the summer.

The bid to end a 29-year wait for the league title has seen Roma centre-back Kostas Manolas added to the fold for £32 million, alongside Fenerbahce midfielder Elif Elmas and Empoli right-back Giovanni Di Lorenzo.

All three are expected to feature against Liverpool on Sunday unlike Allan, Adam Ounas, David Ospina and Kalidou Koulibaly as they remain on their post-season break due to their respective participation in international tournaments.

Former Liverpool target Piotr Zielinski is likely to take his place in the starting lineup, as will Napoli’s regular forward combination of Arkadiusz Milik, Dries Mertens and Lorenzo Insigne.

The trio combined for an impressive 53 goals and 22 assists across all competitions last season.

This will be the fourth time in the space of a year the two clubs will have met, with a pre-season meeting in Dublin, where the Reds won 5-0, preceding a dramatic Champions League group stage tie.

Both teams notched a 1-0 victory over the other last season, but it was Liverpool’s win at Anfield which sealed their place in the knockout rounds and forced Napoli to fight it out in the Europa League.

The Italian outfit have played three pre-season friendlies to date, the most recent of which saw them draw 3-3 draw with Serie B side Cremonese on Wednesday.

The Reds are set for a debut outing at Murrayfield Stadium, the home of Scotland’s international rugby union team.

The 67,144-capacity stadium, the second-largest in Scotland, is also been known to host Scottish League Cup semi-finals and was once the home of Edinburgh outfit Hearts.

This will be Liverpool’s first trip up to Edinburgh since facing off against Heart in their 2012 Europa League campaign, ensuring the Reds’ rare presence on Sunday is no doubt an exciting prospect for the native Robertson.

The meeting between the Premier League and Serie A side is a sell-out and will be a moment to savour for fans of both clubs.

The fixture will be broadcast live on LFCTV and LFCTV Go in the UK, where coverage from the game in Edinburgh will start at 4.15pm (BST), with kick-off scheduled for 5.00pm.

This Is Anfield’s Joanna Durkan will be providing live updates from Murrayfield in our matchday blog, as the Reds continue their preparations for the 2019/20 season and look to pick up their first pre-season win since emerging as victors against Bradford City.

Be sure to stay tuned to This Is Anfield on Sunday for all the latest updates and team news prior to kickoff, with reports and analysis of the fixture to come following the final whistle.