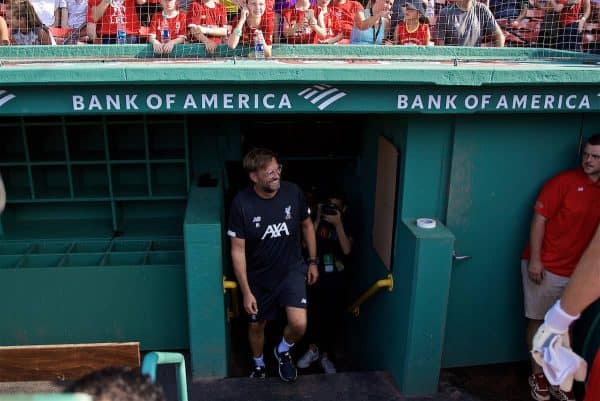 Liverpool take on Sevilla in the second friendly of their US tour on Sunday (6pm EDT, 11pm BST). Here’s how to watch live online and on TV around the world.

The Reds continue their three-stop tour in Boston at the home of FSG, Fenway Park, taking on their opponents from the Europa League final in 2016.

A 3-2 loss to Borussia Dortmund last time out in South Bend served as another invaluable exercise for Jurgen Klopp‘s side, as they are put through their paces in the searing heat.

It is set to be an even tougher challenge tonight, as an early kickoff in the US could see Liverpool play in 34 degrees, with a squad depleted by injuries.

Nathaniel Clyne, Adam Lallana and Bobby Duncan missed Saturday’s open training session, as did Alex Oxlade-Chamberlain, though the indication is the latter is simply being cautiously managed.

This should see a host of youngsters given further opportunities alongside the likes of Virgil van Dijk, Trent Alexander-Arnold and Gini Wijnaldum, who could make their first starts.

Can the Reds return to winning ways as their pre-season preparations continue?

Liverpool vs. Sevilla is live on LFCTV, with coverage starting at 10.15pm (BST). LFCTV is available on channel 434 on Sky and channel 544 on Virgin Media.

Liverpool vs. Sevilla is being broadcast live by B/R Live in US, kicking off at 6pm (EDT).

The match is also available to stream live on LFCTV Go.

Supporters can find the Reds’ return to Fenway Park on the following channels worldwide: