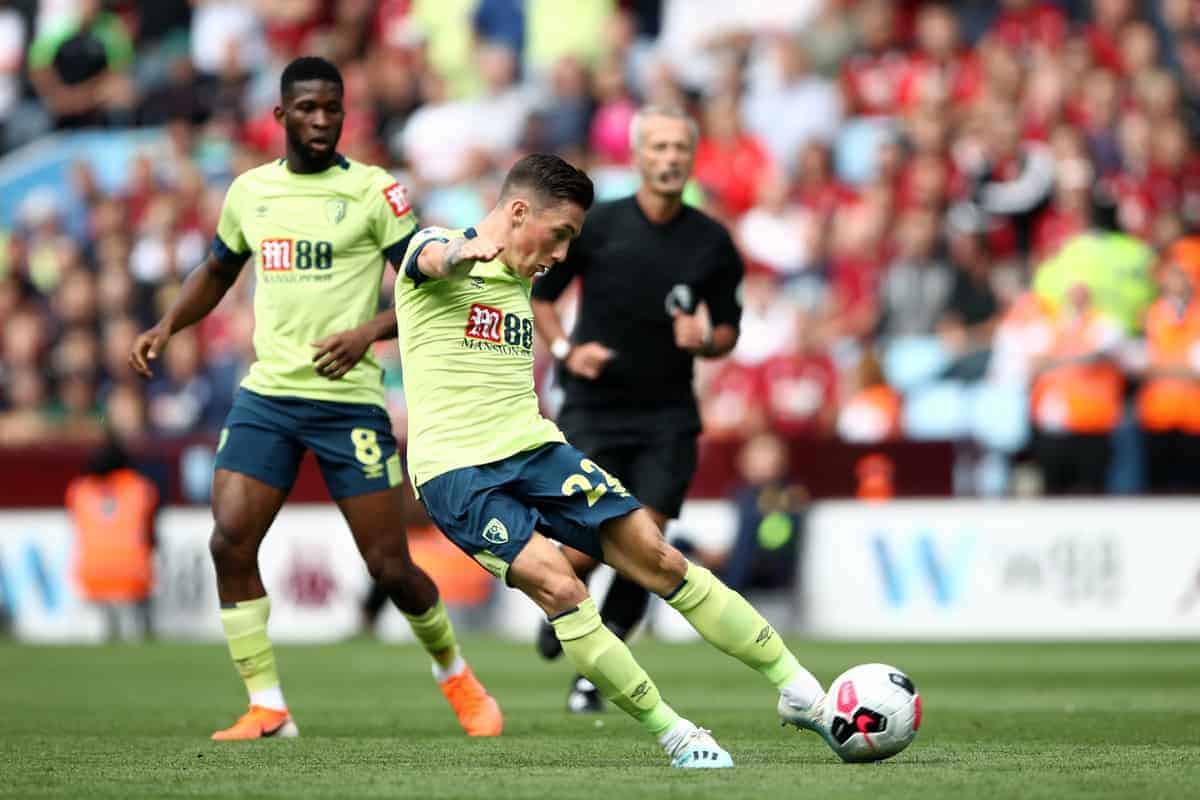 Harry Wilson opened his Premier League account with another brilliant long-range strike on his debut for Bournemouth, enhancing his reputation even further.

It came as a surprise to many that Liverpool were willing to loan Wilson out this summer.

The 22-year-old had impressed throughout pre-season, and given the lack of attacking depth in Jurgen Klopp‘s squad his presence would have been welcome.

But the decision was made that, with Bournemouth interested in a season-long deal, Wilson would spend the campaign gaining more experience at Dean Court.

After sitting out of their opening-day draw with Sheffield United, the Wales international was part of the starting lineup as Eddie Howe’s side travelled to Aston Villa on Saturday.

Deployed on the right wing, Wilson saw Bournemouth go one up within two minutes as, with namesake Callum Wilson brought down in the boxed, Joshua King stepped up to convert an early penalty.

It wasn’t long after when the Cherries’ lead was extended, and it came through the Liverpool loanee as, picking up the ball 30 yards out following Douglas Luiz’s lapse, he drove forward and fired a trademark strike on goal.

Wilson’s effort swerved via a deflection off Tyrone Mings, and eventually found the back of the net after thumping the post.

Villa pushed to get back into the game, and Bournemouth ‘keeper Aaron Ramsdale was kept busy throughout, with hosts eventually clawing one back through a stunning Luiz goal.

But the Cherries held on for the three points, and Wilson took to Twitter after the game to relish a dream debut in the English top flight:

Buzzing to get a debut goal and the 3 points??? great shift from the boys?? thanks for the support!? https://t.co/GuOvE9heOE

The No. 22 played 76 minutes before being replaced by Dominic Solanke, and speaking after the game Howe praised his contribution.

He described Wilson’s long-range ability as “a massive asset and strength of his,” while he added that he “naturally took up the positions we wanted him to” which is “a great sign for the future.”

“I loved it. It’s what I’ve been working towards,” Wilson told AFCB TV.

“I have had a lot of minutes in the Championship and internationally but never in the Prem.

“I was delighted to get my first minutes, thankful to the manager for picking me from the start and I enjoyed it.

“I just wanted to get out there, get on the ball, try to create stuff and I felt I did that.”

This goal will be a major confidence-booster for Wilson, who is looking to prove himself in the Premier League as he still harbours hope of a long-term future at Liverpool.

It can certainly be argued that the Reds would have benefited from him being part of the squad this season, but returning after a campaign as a regular starter for Bournemouth could be key.