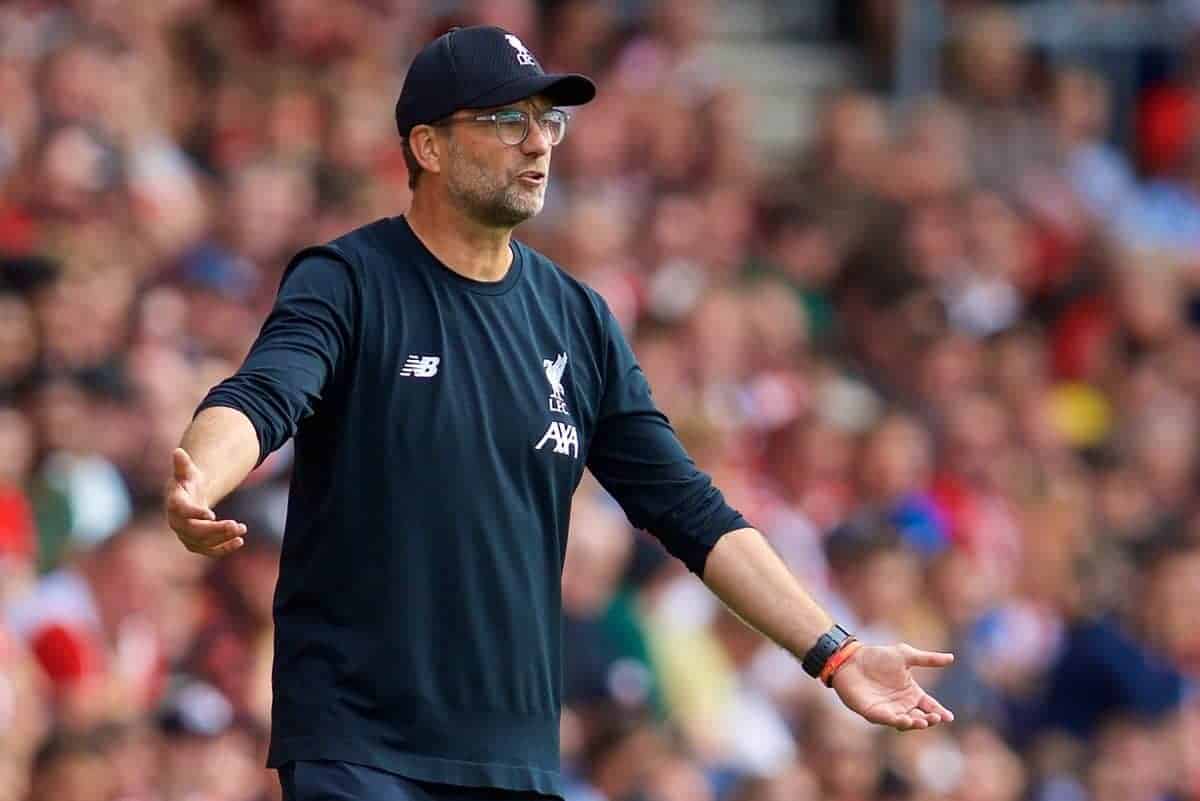 Jurgen Klopp has explained his plans to rotate the most “intense positions” in his Liverpool side, after a spell that brought three wins in the space of eight days.

The Reds opened the Premier League season with a 4-1 win at home to Norwich on Friday, before heading to Istanbul for a penalty-shootout triumph over Chelsea in the UEFA Super Cup on Wednesday.

The following Saturday saw tired legs fight for a 2-1 victory at Southampton.

Klopp made just three changes at St Mary’s, but two came in telling areas as Jordan Henderson and Fabinho dropped out.

Both were visibly fatigued in the closing stages in midweek, and before the weekend’s win, Klopp explained that they were “the two midfielders with the highest work rate,” and “we have options so let’s do it.”

Gini Wijnaldum was introduced in the No. 6 role and Alex Oxlade-Chamberlain, who only played a half against the Blues, dropped back to join James Milner—subbed on 64 minutes in Turkey—as the shuttling duo.

Speaking to reporters on Saturday, Klopp detailed his plan to rotate in the “intense positions” this season.

Namely, this is every role bar goalkeeper and centre-back, with a larger emphasis on midfield.

“No football player should play 50 or 60 games a season, especially not in these intense positions,” he told reporters including the Telegraph‘s Jeremy Wilson.

“Goalie and a centre-half maybe do it but all the rest: give whatever you have and next game maybe somebody else will do the job.

“That’s the plan, but we can only do that if they all stay fit.”

Fitness is the key issue here, as in midfield, Klopp has already been hampered with injuries to Milner and Naby Keita, while Oxlade-Chamberlain is being carefully managed and Adam Lallana missed parts of pre-season.

For many fans, the sight of Fabinho coming onto the field to briefly form a trio alongside Wijnaldum and Oxlade-Chamberlain in the middle of the park will have been a welcome sight.

But for Klopp, the wealth of options at his disposal—potentially also including Xherdan Shaqiri, though there are clear reservations over his contribution in midfield—allows him to tailor his selection to a specific challenge.

“I don’t have a favourite midfield,” he added. “I like them all.”

However, in quotes supplied by the Liverpool Echo, the manager did touch upon a familiar concern among supporters regarding Milner.

“Sometimes we speak about it and say don’t run that much because it’s better when you are in another position!” he said.

There are certain games when Milner’s indefatigable work rate—and his willingness to cover full-back and winger along with his central duty—are of great use.

But in others, and in particular the first half of the Super Cup, his tendency to drift leads to a gulf in the midfield which would be better filled by the likes of Wijnaldum, Henderson, Keita and Oxlade-Chamberlain.

It is an interesting poser for Klopp, but it should be noted that, so far, he has only utilised 14 outfield players in the first three competitive games.