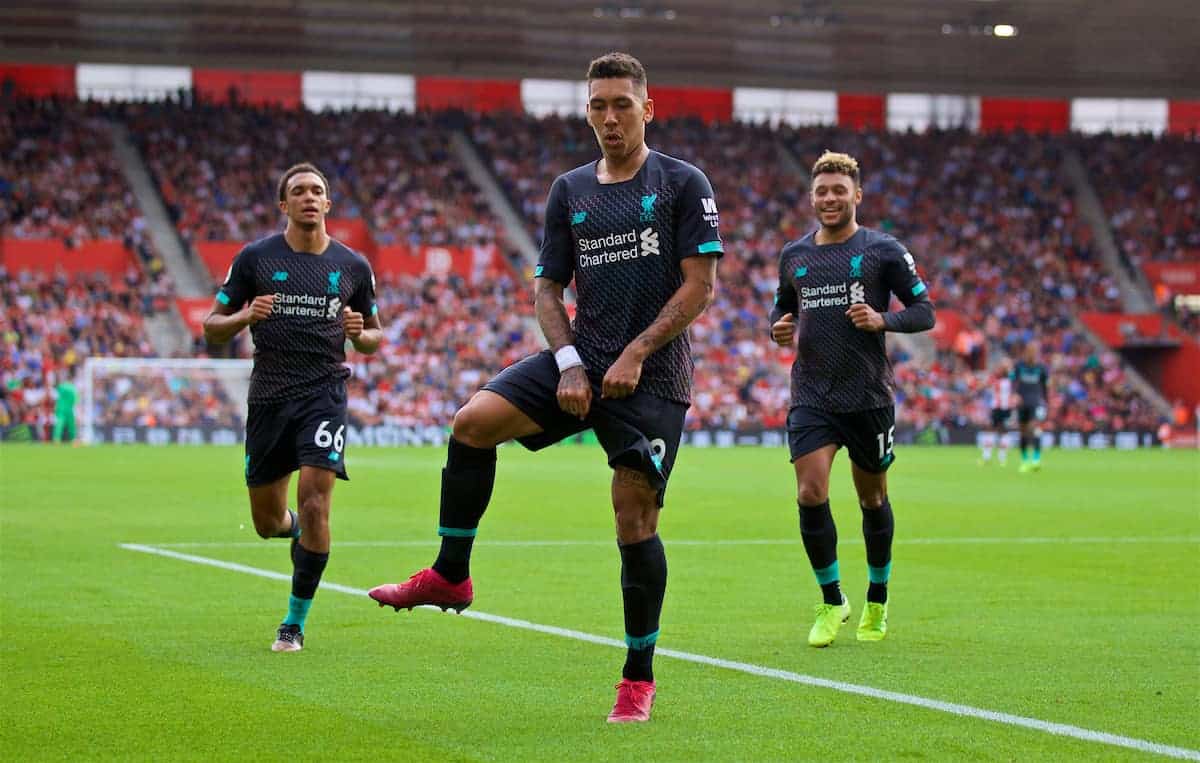 Liverpool earned a tense 2-1 win away to Southampton on Saturday afternoon, with supporters left both delighted and relieved after the final whistle.

After Wednesday’s excursions in the UEFA Super Cup, Jurgen Klopp knew that his side may not be at their best at St Mary’s.

Despite a predictably leggy first-half performance, Liverpool led at half-time thanks to Sadio Mane‘s stunner just before the interval.

The Reds were fantastic in the second half, though, bossing proceedings and seeing their lead doubled by Roberto Firmino.

An Adrian howler allowed former Liverpool man Danny Ings to pull a goal back for the hosts, but Klopp’s men held on in a tense finale.

The win was met with delight, on a tough afternoon on the south coast…

That game had it all…it was a right rollercoaster. #LFC #SOULIV #Liverpool #Southampton #VanDijk pic.twitter.com/gPXHdsMTan

Not bothered about the performance there at all. Poor performance expected on the back of the Super Cup game with little time to recover.

3 points and no further injuries (hopefully) is all that matters.

Absolutely delighted with that win.

A predictably awkward afternoon but the Reds ground it out brilliantly. Some superb football after the break.

“Good 3 points at this stage of season, very good 2nd half.” – Gary Merrell on Facebook.

“There will be times where we will need to grind out results. Maybe too early for our liking but so be it. Another 3 points and marching towards another stellar season. Delighted for the boys.” – auzziez on the forums.

That's a very, very good result in the context. Coming into this strange half-derby two and a half days after playing 120 minutes in Istanbul. Don't ever doubt the mentality or quality of this squad of players. I say this to myself as well. Up the European Champions. #LFC

Very good second half that by Liverpool. Scored one more, controlled game, created chances and killed it off until that Adrian brain fart.

Ready for another season of absolute bedlam tbh. #LFC pic.twitter.com/NYlNKJVyj5

Mane and Firmino earned huge praise for their impact…

Thought for 45 minutes that would be a game to trip Liverpool up. They had excuses, but they had a game-changer in Sadio Mane. Brilliant goal, brilliant assist, and instrumental in another very good win for #LFC

• 3 massive points.
• Got away with it today.
• Unbeaten season continues.
• Mané is simply world class & MOTM.
• Firmino = Best 9 in the world.
• Feel sorry for Adrian, but
• Can’t wait to have Alisson back.

Arsenal at Anfield, next.

Here it is, all we need to calm our nerves. The man, the legend. https://t.co/V4x5nX5KcD

Made up with that result after playing 120mins in Super Cup less than 48 hours ago.
MOTM Sadio Mane pic.twitter.com/5eABcGBzSD

Huge 3 points for Liverpool today after a really difficult 72 hours. MOTM Sadio Mane scored a sizzler and assisted on Firmino's strike which ultimately sunk the Saints. Not happy about Adrian's gift to Ings though. #SOULIV 1-2 #PremierLeague

Oxlade-Chamberlain caught the eye in his preferred midfield role…

Jurgen Klopp in the tunnel as he walks past Alex Oxlade-Chamberlain between interviews:

“OXLADE. OXLADE. Man of the match today are you, Oxlade?” #lfc

He was nowhere near his best but it’s evident what Ox brings to the midfield – dynamism, pace and directness. Great to see him back

Ox was brilliant for the most part today, was the best of the midfield 3. Should go a long way to getting his confidence back

“Six points out of 2, but we need to improve. Like the show from the Ox” – Benson Safeli on Facebook.

“Glad we got through. Ox was good.” – StevenAlonso on the forums.

Mane was excellent and thought Chamberlain had a fine game considering he’s still very much on the comeback trail.

Ox was brilliant for the most part today, was the best of the midfield 3. Should go a long way to getting his confidence back

Love winning ugly. 2 down, 36 to go. Special shoutout to the Ox and Adrian today, both very very good. Adrian's saves in the first half kept us in the game, everyone makes a mistake! Up the Reds ?

No idea why Adrian goes central there, with Ings on the hunt. Both wide areas completely free and unmarked. #SOULIV

Like Alisson make all your mistakes in games you win and noone will remember them. Made some great important saves in the first half. Kept his head after the mistake. Migs was the opposite hence why he's been upgraded.

“Calm down lads. Alisson got a howler last season too. Hope Adrian learn from this mistake. Scrappy match. 3 points, I’ll take that. Next match.” – Jagung Ken on Facebook.

Can't fault the mentality of this Liverpool team. They just find ways to win.

As for Adrian. let's hope that was his 'Alisson at Leicester' moment.

His actual goalkeeping was really good, just his lack of urgency with it at his feet that needs sorting, same as AB last year.

I miss you Alisson

The PA announcer stuck on Don't Look Back In Anger as the players walked off the pitch. Apparently it was requested by a Mr A Drian from the Merseyside area.