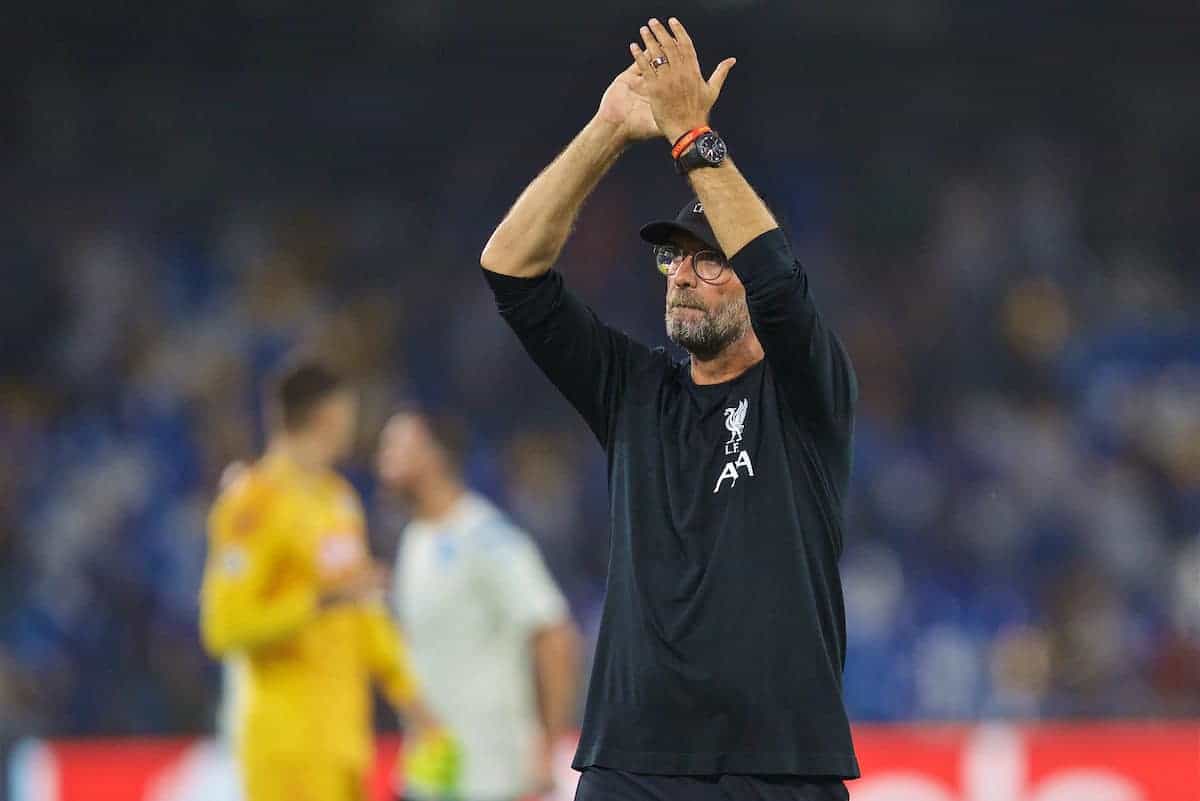 Jurgen Klopp questioned the awarding of a penalty to Napoli which he felt proved decisive as Liverpool started the defence of their Champions League crown on a bum note.

The Reds lacked a cutting edge but would have been worthy of a point at the intimidating Stadio San Paolo, only for the Group E opener to hinge on Jose Callejon being upended in the area by Andy Robertson.

Dries Mertens converted from the spot in the 82nd minute before Virgil Van Dijk lost the ball on the edge of the area in stoppage time, allowing former Tottenham striker Fernando Llorente to seal a 2-0 win for Napoli.

Liverpool manager Klopp said: “When we conceded to go 1-0 down that was the game changer. We have to accept the result.

“We are really critical of ourselves but it was not a really, really bad performance, it was a game which we could have won at Napoli but we didn’t because we didn’t score.

“We wanted to have at least a point and we didn’t get that because of the penalty. I’m pretty sure there are different views on that situation but when a player jumps before there is contact then it cannot be a penalty.

“But we cannot change that anymore so that’s how it is and now we carry on, that’s it.”

The Reds’ strong appeals for a penalty against Newcastle at the weekend fell on deaf ears but they maintained their 100 percent winning start to the Premier League season by beating the Magpies 3-1.

Tuesday night’s decision proved central to the outcome but Klopp refused to be too critical of the process involving the video assistant referee.

He added: “I could say a lot of things about it but then I would look like a bad loser. I’m not the best loser in the world but I’m not bad at it.

“It was very decisive in that moment for sure but we can’t change it. As long as human beings make the decisions then there is still potential for [mistakes]. The rules are like this and we trust in the rules.”

The visitors, barracked throughout in a hostile atmosphere in Naples, lost the corresponding fixture between the sides last season en route to being defeated in every group stage game away from Anfield.

The Merseysiders managed to pip Napoli to the knockout stages by virtue of goals scored and went on to lift the European Cup for the sixth time in their history.

Klopp believes Napoli are more than capable of going all the way this season.

Napoli counterpart Carlo Ancelotti welcomed Klopp’s assessment of his side as potential winners.

The Italian said: “If Jurgen Klopp says that we have the ability to go on and win the Champions League then I say to him, ‘thank you very much’ because he’s a coach that knows football inside out.

“But there is still a very long way to go. Our first objective is to try to get through to the knockout stages.”

Ancelotti shied away from talking about the penalty award, preferring to focus on his side’s display.

He added: “It wasn’t all perfect but just when it seemed all was lost and Liverpool had taken complete control of the game, the team were very orderly and very switched on and they never lost sight of the game plan.

“The two goals came from rather curious and unusual circumstances but ultimately I’m very happy with how we played.”