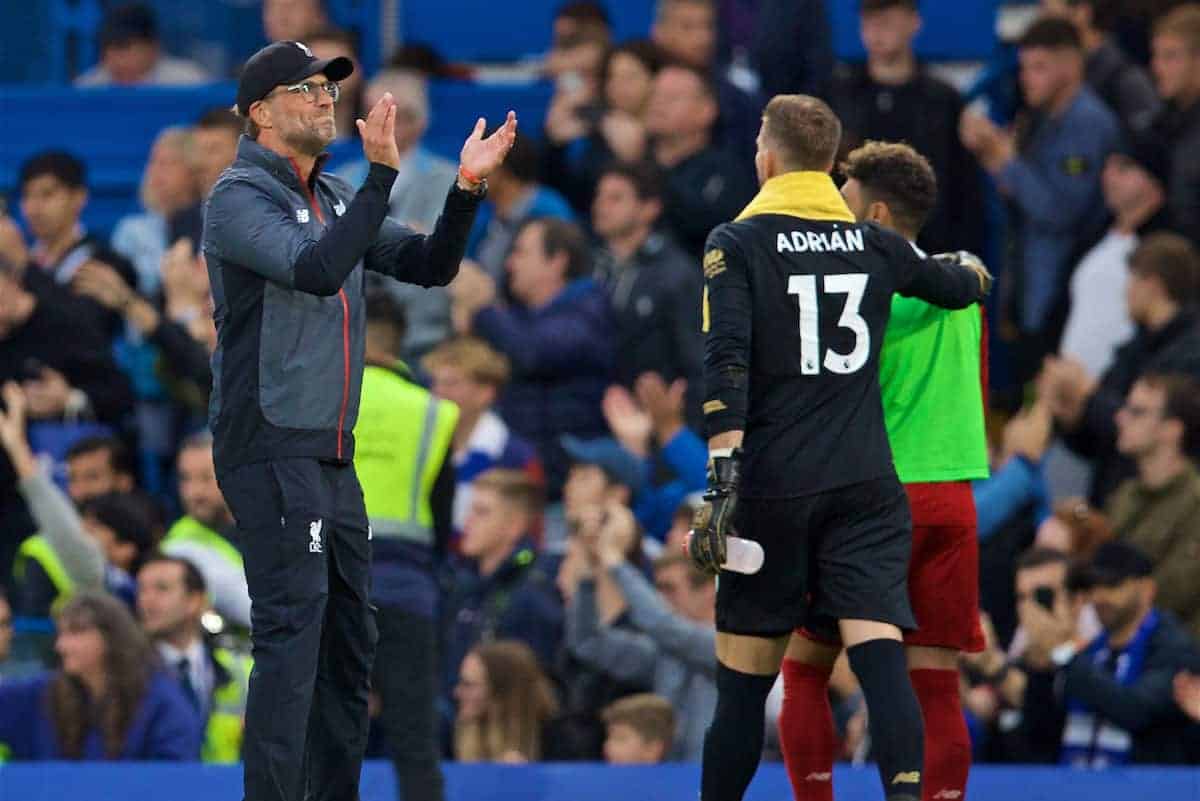 Livepool made hard work of their 2-1 win at Chelsea, but fans were simply relieved to walk away with all three points.

The Reds returned to Premier League action off the back of a midweek defeat to Napoli in the Champions League and Jurgen Klopp‘s side eventually returned to winning ways.

A positive start from the Reds saw Trent Alexander-Arnold establish an early lead with a brilliantly worked free-kick, then Roberto Firmino doubled the lead after heading home Trent’s dead-ball delivery – with Chelsea having a goal overturned by VAR for offside in-between.

The second half saw the Reds invite Chelsea to pile on the pressure as Klopp’s men struggled to find the needed composure to take the sting out of the game, ultimately leading to N’Golo Kante to peg a goal back.

Liverpool would hold on for victory to take stretch their winning start to six and secure their 15th league win in succession.

The opening goal received mass adulation for the build-up, plan and execution…

He just gets better and better. @trentaa98 is one of the most exciting young talents on the planet. Sensational player.

Brilliant driving run and incisive pass by Fabinho to Mane to create the opportunity in the first place.

Gerrard-esque from Alexander-Arnold that is. Superb technique on the strike, wonderful goal!#CHELIV #LFC

free kick routine gets better each time you see it. lay off coming from Salah rather than Henderson when that player usually dummies. Matip and Wij screen wall then split. Mané's one man "wall" keeping Kovacic honest. so so so good.

“Brilliant free-kick that. Precise and with power!”

34 – Liverpool have scored 34 goals from set-piece situations in the Premier League since the beginning of last season, at least seven more than any other side. Another. https://t.co/A8bjtBQTBa

That really is an absolute corker from Trent Alexander-Arnold.

Despite all the chat between Hendo, Mo and Trent before the free-kick, pretty sure they knew straight away what the move was going to be. Practice makes perfect.

Fabinho looks extremely tired. not the only one who parted the seas for Kanté but probably the most important

Zero pressure on the ball, no effort at all …

#LFC's complete lack of control in the middle costing them there. Why have they allowed the second half to be this open?

Mo Salah is always a bit like this in these big away games. Has to do more to keep the ball. Decision making not good. Always a threat but can do a lot better.

Can we sub anyone on for Gini? No attacking threat at all #LFC

Matip having one of the best games of his career.

Since the start of 2019, Joel Matip has been our best player.

Matip was immense again 2nd half. Gomez is a great player but Joel is keeping him on the bench this season

“Is Adrian playing or Alisson? Has been massive” – indianscouser on the forums.

“GOSH… Adrian is turning out to be a reliable goalkeeper!” – Lynn Chang on Facebook.

Let's fucking talk about Adrian. Wow. Man was sensational midweek, and has been sensational today. If he doesn't save Tammy's 1 on 1, could be a different game. Big fucking game player. Amazing piece of business that man. Let's fucking go. #LFC

After a poor & tense finish, fans were simply overjoyed to walk away with all three points…

Fantastic result, 15th PL win on the spin. Second half the Reds looked like they'd played away at Napoli in midweek, which is why this was always likely to be tough. But dug it out. Chelsea threw everything at it, but 6 wins from 6, 5 points lead at the top for Klopp's men

Hardworking win for the Red Men who just roll on. Tough 2nd half but the 3 points is all that matters

“First half was very good, the second one was far from our best, but…we got the 3 points!!! And that’s the most important thing!”

Thing is, we can play as poor as that and still beat a ‘Top Six’ club away from home.

Making the best league in the world look easy.

Liverpool were really poor for most of the second half – and don't think sending on Milner and Lallana helped that – but rode their luck and took the three points. ?

Massive win that considering how poorly Liverpool played in the 2nd half. Lack of control was alarming.

Not helped by both subs being poor and making matters worse. Would've preferred Ox and Shaqiri personally.

Salah off day. Poor in possession & gave Trent no help all day.