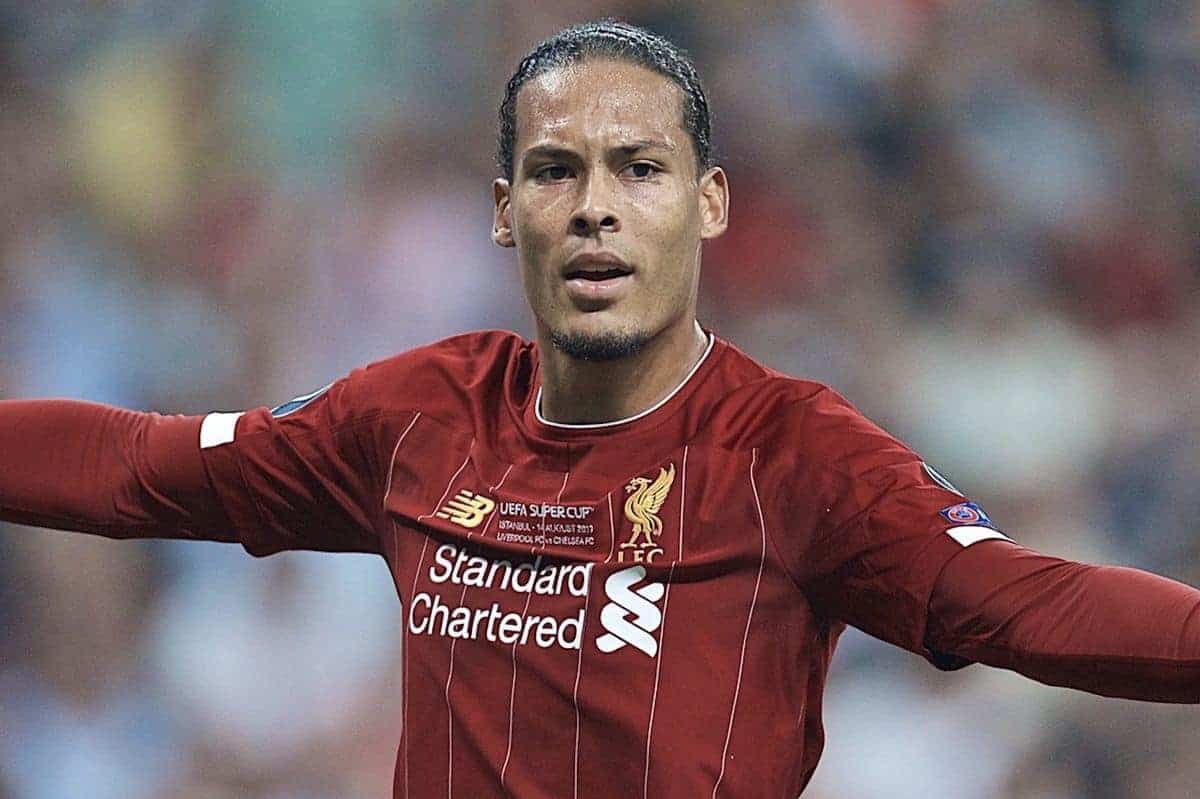 Virgil van Dijk‘s position at the top has prompted scrutiny and laughable criticism, with the Liverpool centre-back undoubtedly the best in the world in his position.

I was down in North London the other weekend and watched Liverpool’s 3-1 win against Arsenal in a bar in that neck of the woods.

Which was weird, having not missed a Liverpool vs. Arsenal game at Anfield since 1992, but during the first half, after Nicolas Pepe dribbled past Virgil van Dijk, there was a Gunners fan giving it large.

“He fackin’ destroyed Van Dijk, he did him all ends up lads,” he crowed. It led to nothing. Like most Arsenal away days against top-six clubs.

Later, at the same end of the pitch, Mo Salah went past David Luiz twice in nine minutes. It led to two Liverpool goals, one from the penalty spot, the other clinically and composedly slotted into the bottom corner despite the incredible pace he was running at.

Afterwards, in their stats roundup, BBC Sport flagged up the following: “Nicolas Pepe has become the first player to successfully dribble past Virgil van Dijk in the Dutch defender’s past 50 appearances in the Premier League, since Mikel Merino in March 2018 for Newcastle.”

Funnily enough there was no mention that Salah had become the first player to successfully dribble past David Luiz since himself nine minutes earlier—or who the hell Mikel Merino is—but the fact the Van Dijk stat was considered worthy of highlighting simply made him look even better.

Virgil, as he prefers to be called, has missed only one league game since making his Liverpool Premier League debut at Swansea, after the Reds signed him for a bargain £75 million from feeder-club Southampton in January 2018.

That game was the 3-0 midweek win at Huddersfield Town that very same month, when he sat on the bench. He’d previously missed his intended debut, the 4-3 win against Man City, with injury.

Since then, the big Dutchman has played 54 consecutive league games for the Reds and was off the pitch for only 35 minutes last season.

During the 3,420 minutes—plus stoppage time—he was on it, not one single player ran past him with the ball. There’s a word for that: imperious.

Yet I’m glad that run has come to an end. I’m glad Nicolas Pepe got past him. And I’m glad that Man City‘s Gabriel Jesus had managed to do the same, for the first time in 65 games in all competitions, during the Community Shield.

Because it means we now have a central defender so good that people are dredging the sea bed looking for a morsel of criticism to hold against him.

That type of scrutiny, of microscopic nit-picking, only occurs when you’re talking about elite, world-class players.

Like when, in 2016, Lionel Messi going 515 minutes without scoring a goal prompted crisis stories comparing his barren spell to the catastrophic 474 minutes when he failed to find the net in 2010. If only he’d had a comforting Andy Robertson head-rub to make him feel better.

Virgil is the best centre-back in world football. I’m not even entertaining an argument that there is currently a challenger. And the awards keep rolling in to confirm what we can all see.

He didn’t so much beat Messi and Cristiano Ronaldo to receive that accolade last week in Monaco, he thrashed them, winning by more points in the vote than Dean Saunders has got on his driving licence.

More importantly, in my opinion anyway, he’s the player signed by Jurgen Klopp that has transformed Liverpool’s fortunes for the better more than any other.

All those years of being tortuously undermined by a defence that buckled in the big games was resolved by bringing in a proper cornerstone at the back, albeit a cornerstone with a world-class goalkeeper behind him.

Speaking of which, there’s been too much talk that Liverpool’s defence aren’t as good as last season, an over-analysis about opponents getting too many chances.

Like Shakira’s hips, the stats don’t lie, but at a time when Klopp is without his first-choice goalkeeper, had many of his players back late following summer international tournaments and is experimenting with a higher line and the offside trap knowing VAR means borderline decisions no longer favour attackers, a concession of more goalscoring opportunities is inevitable.

If the Reds aren’t keeping regular clean sheets when Alisson is back then it would be more of a cause for concern, but my calendar still says it’s September while only Roy Hodgson’s Crystal Palace have conceded fewer goals.

No offence to Martin Kelly and Gary Cahill, but I’m pretty sure they won’t go 50 games without being dribbled past or be named as UEFA Men’s Player of the Year any time ever. Nor will any other centre-back in English football.

Long story short, Virgil van Dijk is the best in the world. I just hope he’s left some space on the mantlepiece for the Ballon d’Or.

Chris McLoughlin writes for This Is Anfield each week; he’s also senior writer for the Official LFC Matchday Programme and LFC Magazine. You can order here.