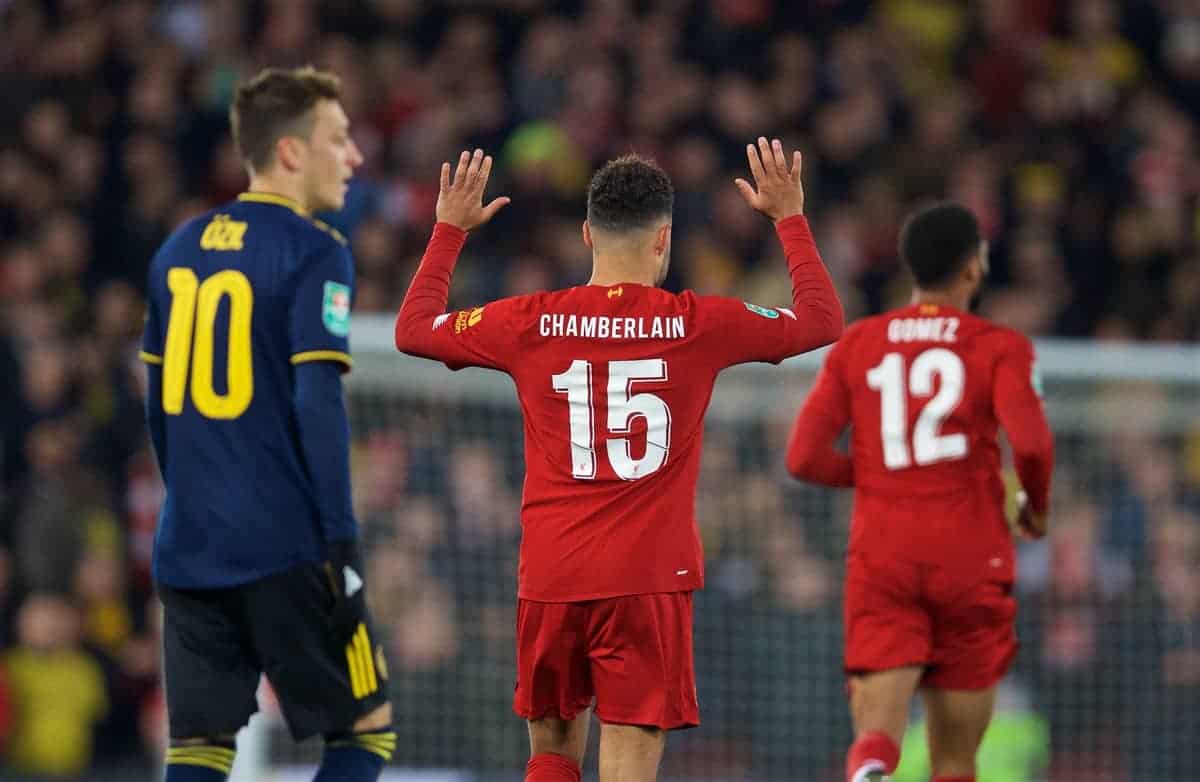 Alex Oxlade-Chamberlain sets himself exacting standards and was not impressed with his role in a crazy Carabao Cup win over former club Arsenal.

The 26-year-old, making only his sixth start of the season after missing all-but 20 minutes of the previous campaign with a serious knee injury, scored his third goal in a week in the 5-5 draw, which the Reds went on to win 5-4 on penalties.

However, the England international accepts he was far from his best and knows he will have to improve if he is to force his way into Jurgen Klopp’s midfield more regularly.

“Quality-wise, I am not too happy with my performance to be honest,” said Oxlade-Chamberlain.

“I wasn’t great on the ball and not near my own personal level of where I want to be. I put in a good shift and run a lot.

“I watch the boys of a weekend and I know what it is about here. You have got to be at a really high physical level to go and put in a performance like that.

“[Fabinho] did really well at the weekend so I need to keep pushing myself and maybe I will get a chance.”

In Oxlade-Chamberlain’s favour is his goalscoring threat from deeper positions with his three goals in 12 appearances already making him Liverpool’s joint leading scorer from midfield with James Milner (two of which have been penalties).

He has scored eight times in 55 appearances for the club and most have been far from ordinary.

The quality of his strike from distance against the Gunners meant even Oxlade-Chamberlain allowed his emotions to take over despite pledging to himself not to celebrate against his former club.

“At the minute they are not tap-ins, let’s put it that way,” he added.

“It was a pretty good goal so it was really hard to keep the celebrations in but that is always something that I knew I would do against my former club.

“I always want to show a lot of respect for Arsenal and what they did for me and the times I had there.

“I didn’t want to celebrate but it was a tough one to hold in. I wanted to take my shirt off and go mad.

“I have been given license to shoot from outside the box and the last few games I’ve managed to do that. Hopefully it continues.”

A Liverpool side showing 11 changes from Sunday’s win over Tottenham, and including four teenagers, twice came back from two goals down to equalise for the final time in the fourth minute of added time.

It is a trait the first-choice XI have developed but which has been transferred throughout the squad and to the club’s academy.

“It’s mentality and the fans and atmosphere here help massively. It went to 4-2 and at that point the crowd can really drop but I don’t remember them dropping.

“They kept us going at 4-3, when it went 5-4 again after making it 4-4, they were still right there until the end, that helps us massively.

“We always know we have a big chance of winning at Anfield, history speaks for itself and we just kept going.

“I am really proud of how the boys turned out and especially the young lads on their first starts and debuts.”