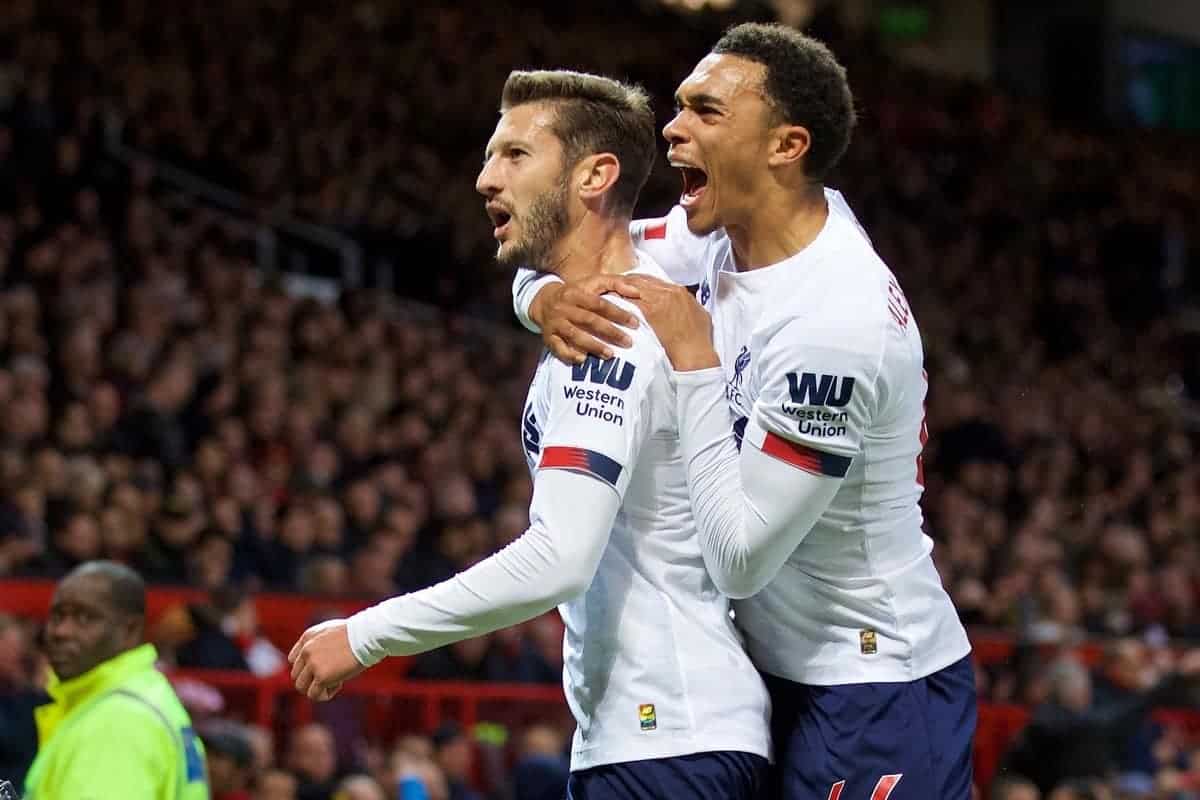 Adam Lallana came off the bench to score a vital late equaliser as Liverpool failed to make it 18 league wins in a row after a disappointing performance at Old Trafford.

Liverpool were expected to dominate despite the absence of Mohamed Salah, but the league leaders failed to impose themselves in the match.

Gini Wijnaldum was unable to beat David de Gea with the best effort of the opening 15 minutes.

Divock Origi came in for Salah, operating on the left flank, and it took the Belgian time to settle as the gulf between him and the first-choice front three was underlined again.

A rare opening down the right saw Sadio Mane play a smart ball across to Roberto Firmino in space, but typical of his first-half showing the No. 9 aimed a weak shot into the clutches of De Gea.

United opening the scoring in the 36th minute with a fine finish from Marcus Rashford, but it was shrouded in controversy as a clear foul on Origi in the buildup was unsurprisingly overlooked by the VAR.

Mane then had the ball in the back of the net after bamboozling the United defence, but VAR then ruled the equaliser out after it revealed the Senegalese handled in bringing the pass down.

Liverpool were far from the team fans have been accustomed to seeing.

Klopp switched to a 4-2-3-1 after the break, with Origi up front, Mane on the left, Firmino as the No. 10 and Jordan Henderson beginning as a makeshift right-winger.

Few genuine openings emerged from this experiment, and the manager opted to introduce Alex Oxlade-Chamberlain for Origi on the hour mark, ending a dreadful appearance from the No. 27.

Liverpool took up a 4-4-2, Mane and Firmino the strikers, and Oxlade-Chamberlain’s arrival in midfield gave the visitors more impetus, with the need for a big performance from the Englishman clear.

Adam Lallana and then, decidedly late, Naby Keita were both brought on as the second half wore on, and after a series of hopeless crosses one eventually paid off, with Lallana on hand to tap home the leveller from Robertson’s low ball.

It was Lallana’s first goal since the final day of the 2016/17 season.

The Reds pushed for a late, later winner, but it came too late as Klopp’s side were forced to make do with a point.

The first points dropped of the season, but equally a point gained given the poor performance across the 90 minutes.