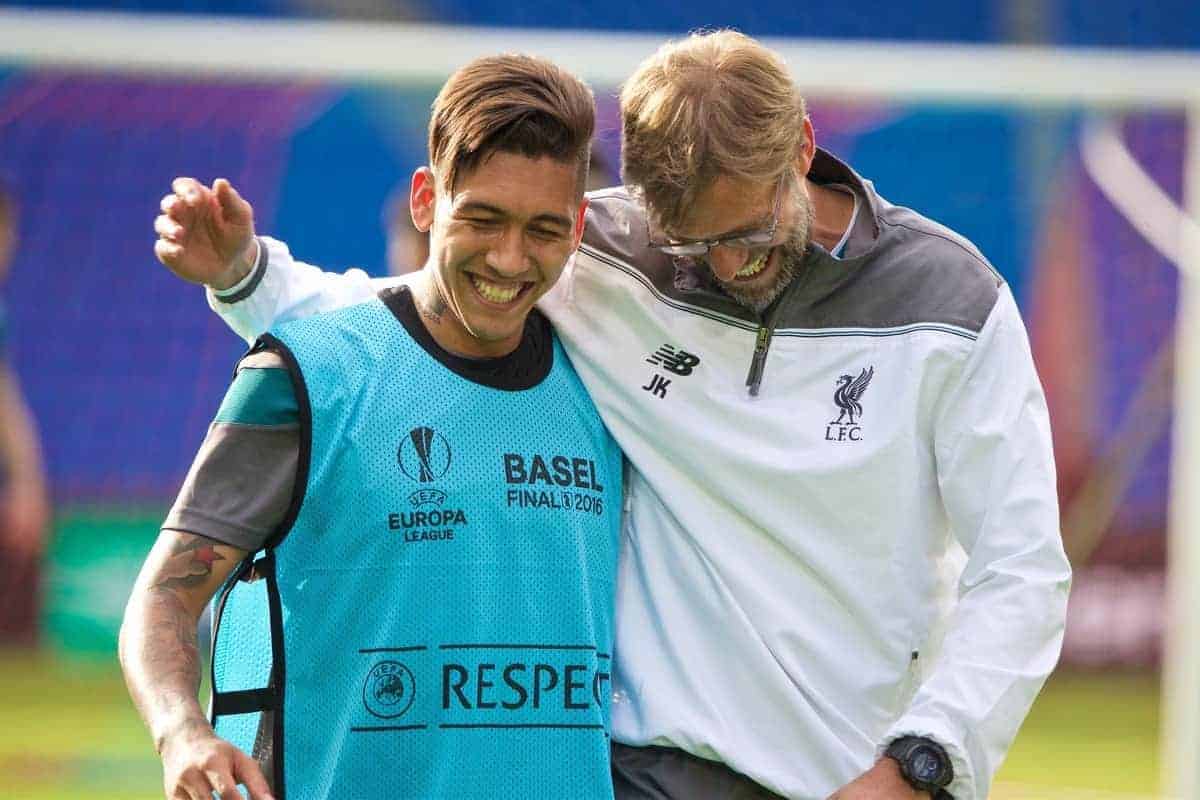 Jurgen Klopp has used 67 players during his time as Liverpool manager so far, but none over the past four years have been more pivotal than Roberto Firmino.

Klopp marked his four-year anniversary at Anfield on Tuesday, and did so with his side top of the Premier League after eight wins in eight to start his third full season in charge.

Having already delivered on his promise to bring a trophy back to Merseyside within four years when the Reds lifted the European Cup in June, the manager is now setting his sights on the biggest domestic prize.

He has formed a squad capable of challenging Man City in the league, though some of his key players were already at the club before he arrived in 2015.

One of those is Firmino, whose £29 million switch from Hoffenheim to Liverpool came three-and-a-half months before the German’s appointment, though he was not properly utilised until Klopp was brought in.

After a difficult adjustment period under Brendan Rodgers as a makeshift winger—accommodating the Ulsterman’s choice of signing, Christian Benteke, as No. 9—Firmino was then able to flourish in the No. 10 role, before moving up front.

He is now considered one of the best centre-forwards in world football and is a truly unique talent who fuels the Reds’ success both on and off the ball.

In Klopp’s 221 games as Liverpool boss so far, no player has featured more than Firmino, who has played in 197 of those.

Remarkably, Firmino is also the only Red to have broken the top 10 when it comes to appearances throughout Klopp’s entire managerial career, which began with Mainz in 2001 and included another seven-year spell with Borussia Dortmund.

The Brazilian comes in at No. 8, with Neven Subotic (281) the most-used, having followed his coach from Mainz to Dortmund in 2008.

No player to have made more outings under Klopp than Firmino has done so in a shorter space of time, with the 28-year-old having played for his current manager for the equivalent of four full campaigns now; Subotic totalled nine.

In fact, Firmino has played a similar number of games in the same space of time as Robert Lewandowski did for Klopp (186).

Lewandowski is the only player to have directly contributed to more goals under his stewardship, with the Pole scoring 102 and assisting 42 goals (144 total) and Firmino scoring 69 and teeing up 54 (123 total).

Liverpool’s No. 9 has tallied more assists than any other player in Klopp’s career, with seven more than Jakub Blaszczykowski (47) and nine more than Marco Reus and Mario Gotze (both 45).

Only Lewandowski and Mohamed Salah (77) have scored more, while tellingly, Mane (67) is also in the top five for goals scored under Klopp.

It is clear that Klopp trusts Firmino absolutely, and has been vocal in his praise for the striker on a number of occasions over the past four years.

Perhaps most indicative of his faith came just over a year after he took over, telling reporters in December 2016, “when I saw that Liverpool had signed him I thought: ‘How could Liverpool do this?’.”

The argument was that the Reds were “not in their 100 percent best moment and other clubs would have spent more on him,” with Klopp concluding: “‘What a good transfer for them’.”

Four years into their time together on Merseyside, it is fair to say that is an understatement.