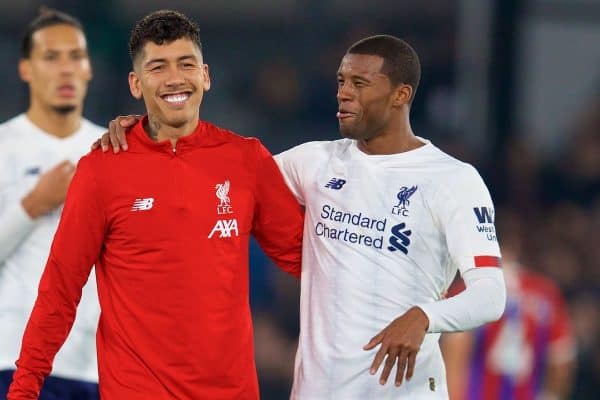 5 things we learned from the Premier League this weekend

Jose Mourinho got off to a winning start on his Premier League return with Tottenham against West Ham at the London Stadium.

Liverpool took another step towards the title with a 2-1 win at Crystal Palace, which leaves them eight points clear at the top of the table.

Manchester City brought Chelsea’s six-match winning run in the Premier League to an end with a 2-1 win over the Blues as they moved up to third place.

Here, the PA news agency takes a look at five things we learned from this weekend’s action

Return of the Special One

Mourinho’s 11-month football absence ended this week when he replaced Mauricio Pochettino and he needed just three days to improve Spurs’ struggling team, as they moved up to 10th in the table following a 3-2 win against London rivals West Ham.

Goals from Son Heung-min, Lucas Moura and Harry Kane put Tottenham ahead as they secured their first away win for 308 days – a record stretching back to January – as Mourinho looks to make an impact with his third Premier League club.

Heat turns up on under-fire managers

Mourinho’s first victory at Spurs came at the cost of Manuel Pellegrini’s side who remain without a win in all competitions for over two months.

Another manager under pressure is Unai Emery, as Arsenal only just managed to avoid a defeat at Southampton with a stoppage-time equaliser from Alexandre Lacazette.

The Gunners drew 2-2 at the Emirates, and Emery admitted it was up to him to get more out of the Arsenal team who have won just two of their last 11 Premier League matches.

Most under pressure is Everton boss Marco Silva after a 2-0 home defeat to Norwich made it six losses in nine league matches for the Toffees who are just four points above the relegation zone.

Another week of VAR controversy ensued as Crystal Palace had their opening goal against Liverpool ruled out because of a foul by Jordan Ayew in the build-up as Liverpool went on to win 2-1.

Manchester City’s Raheem Sterling thought he had added a late third for his side in a 2-1 win over Chelsea, but his injury-time effort was ruled out for offside in a very tight VAR call, with the player taking to twitter to take out his frustration at the number of overruled goals he had been subject to this season.

Roberto Firmino struck for the Reds five minutes from time to give the league leaders the win at Palace, in another crucial must-win game for the title hopefuls.

Jurgen Klopp’s side had already squeezed past Aston Villa with an injury-time winner and Leicester with a late penalty this season before their victory at Selhurst Park.

Liverpool have now won eight points from goals coming after the 85th minute this season as they remain unbeaten in the league, having dropped points just once.

Chris Wilder’s newly-promoted side have impressed already this season and went into the game ahead of Manchester United in the table.

The Blades were on course for victory following goals from John Fleck and Lys Mousset.

Ole Gunnar Solskjaer’s side struggled to get going at Bramall Lane before three goals in seven minutes put them ahead.

The home side dug deep, with Oli McBurnie coming off the bench to secure a draw.