Jurgen Klopp has named Andy Robertson in his starting lineup for Liverpool’s Premier League clash with Crystal Palace this afternoon.

With the international break having come to a close, the Reds are back in action and on the hunt for another valuable three points.

Liverpool currently sit eight points clear at the summit and can look to extend their lead by clinching their 12th win in 13 games, with a member of the chasing pack set to drop points as Man City host Chelsea in the late Saturday kickoff.

While the ground once proved a major hurdle, the Reds have won all of their last five visits to Selhurst Park.

Alisson starts in between the sticks behind a back four of Trent Alexander-Arnold, Dejan Lovren, Virgil van Dijk and Andy Robertson, with the latter having proved his fitness despite ongoing ankle troubles.

In midfield, Fabinho is joined by Jordan Henderson and Gini Wijnaldum, and the Dutchman heads into the encounter full of confidence after scoring a hat-trick for his country last time out.

And leading the line in attack are Sadio Mane and Roberto Firmino, with Alex Oxlade-Chamberlain starting in place of Mohamed Salah – who is only deemed fit enough for the bench as he continues to battle a lingering ankle injury.

Naby Keita, James Milner and Divock Origi are among the other substitutes. 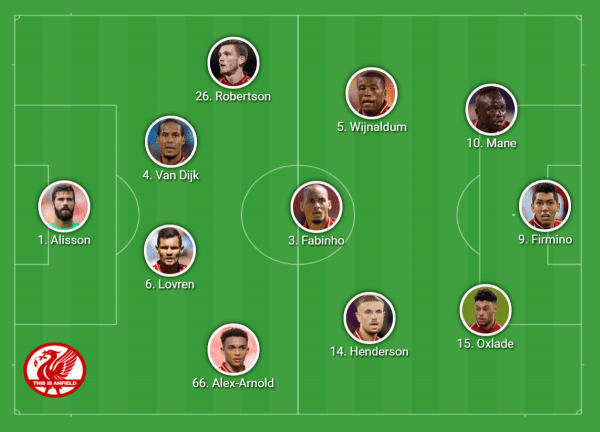