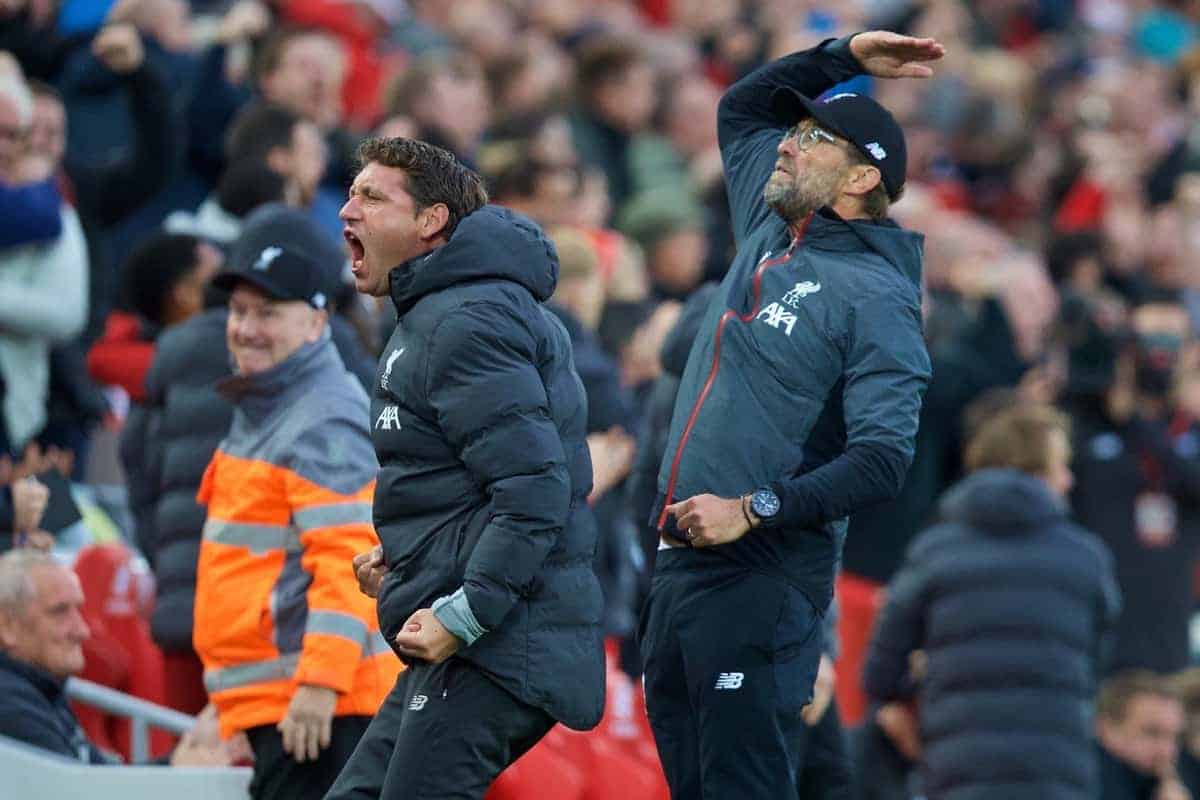 Jurgen Klopp has called for Liverpool supporters to “be in an absolutely top shape” on Sunday, but has warned against a welcome for the Man City bus.

This weekend’s clash is rightly billed as one of the biggest of the season, if not the biggest.

A win for Liverpool will extend their lead at the top to nine points; a win for City would reduce that to just three and increase the pressure in the title race.

Having failed to win either of their meetings with Pep Guardiola’s side last season, there is added impetus on the Reds to take the three points at Anfield.

For this, Klopp believes, they will need the backing of “everybody in the stadium,” with the manager issuing a rallying call in his pre-match press conference.

“On Sunday, we have to play our best game,” he told reporters.

“Everybody in the stadium has to be in an absolutely top shape. The guys who sell the hot dogs have to be in top shape.

“Everybody has to be [up for it] from the first second, come early, go inside, nothing outside, wait for the warmup, be there, all that stuff.

“That’s what I wish for, that before we know if we get something for it, that we already invest all of our emotions before the game. Then let’s play football.”

Klopp’s mention of there being “nothing outside” comes in reference to contact between Liverpool and City officials over concerns of a similar ‘welcome’ to the visitors’ bus to 2018.

The manager described the incident, which according to reports left the vehicle unsafe to drive, as a “senseless thing,” and lamented how it deprived the club of “a nice part of football.”

“In the stadium, that’s completely different,” he continued.

“It’s a senseless thing. So if somebody at Man City is concerned still, it’s our fault.

“Not that we did it, we all didn’t throw the bottle or whatever it was, but it was one of ‘us’.

“That’s why we are responsible for that, and all of us have to make sure that something like this will never happen again. That’s how it is.

“I think it’s long ago and since then nothing happened, I don’t think it was Man City-specific or whatever.

“The punishment we got for that, we never had a similar situation after that.

“Actually we used to enjoy that, when we come in it’s impressive. It’s nice, it’s a nice part of football.

“But then if you overstep the line then you’re not allowed to do it anymore, that’s how it is.

“That’s how it is. Everybody has to really feel the responsibility that something like this will not happen again.

“That’s why said go in the stadium, nothing else to do outside. Get your food and go in, wait for the team, we will come, and then let’s make a pretty special game of it. That’s it.

“And in football it’s always like this, you never know what you’re going to get for it.

“But we know what we have to do for it, and so let’s make sure that we show that.”