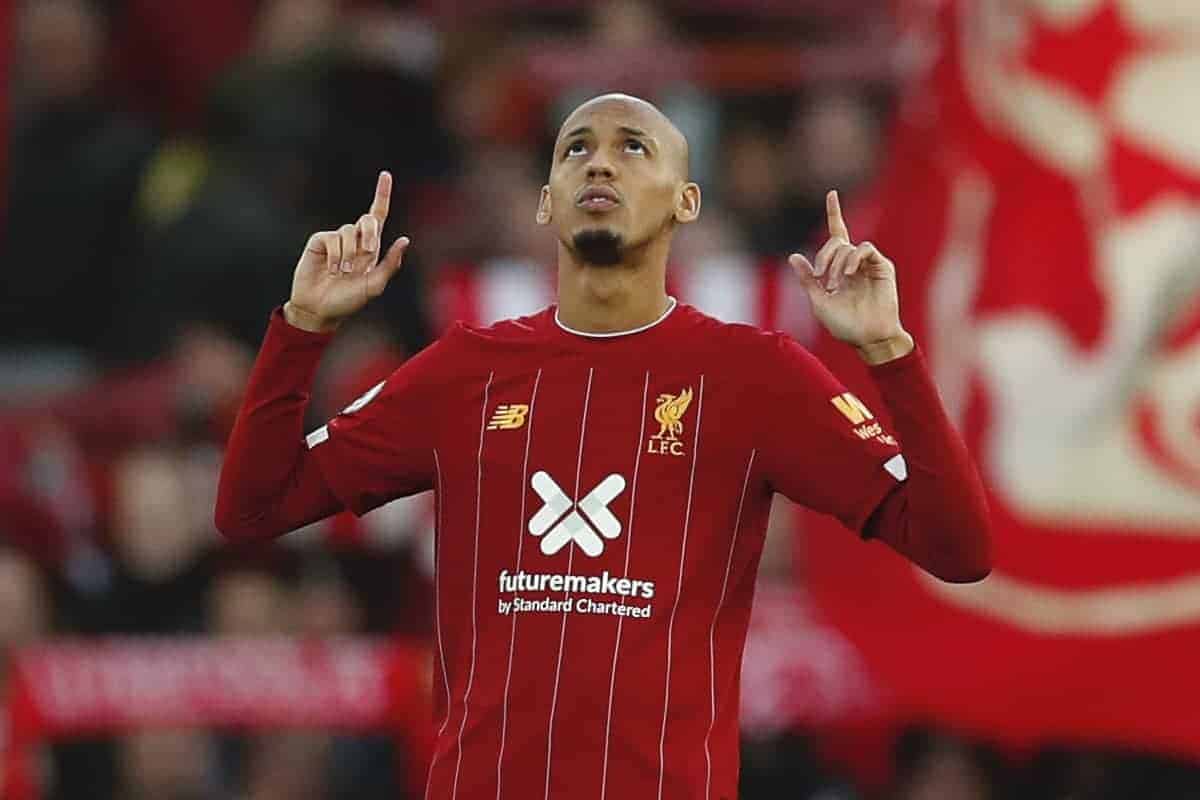 Jurgen Klopp’s will return to Premier League action against Aston Villa, but while a host of senior figures will return will a key midfield general be left out?

Liverpool rung in the changes for the midweek League Cup clash against Arsenal with a handful of youngsters taking centre stage as the Reds’ flair for the dramatics ensued once more.

It ensured a plethora of senior faces were handed an extended break following the win over Tottenham in the league last time out, with the importance of fresh legs increasing as the weeks tick by.

While sweeping changes will once again be made as members of the regular XI return to the fore, Klopp will be forced to consider the repercussions of potential disciplinary action to his key man in Fabinho ahead of Man City’s upcoming visit.

And with several knocks, injuries and a further two games within the next eight days to consider, the key question will be whether Klopp simply focuses on one game to the next or casts his eye to the challenges which lie in wait.

Here’s a look at how Liverpool could look to lineup against Aston Villa on Saturday afternoon.

Liverpool will make the trip the midlands with a relatively healthy squad in tow, with Klopp providing a brief injury update in his pre-match press conference.

As has been well documented, Joel Matip will remain on the side-lines for at least a “few more weeks” with an ongoing knee complaint, ensuring he will not be back until after the international break.

Similarly, while no new update was offered, Xherdan Shaqiri will remain on Merseyside as he continues his rehabilitation from a calf injury.

Naby Keita’s availability remains uncertain as the boss conceded more time will be needed to make an assessment after he was withdrawn from the League Cup clash after picking up an injury Klopp initially considered as “not so serious.”

Elsewhere, Mohamed Salah is expected to feature despite being withdrawn against Spurs as he continued to experience discomfort with his ankle following the tackle by Leicester’s Hamza Choudhury at the start of October. 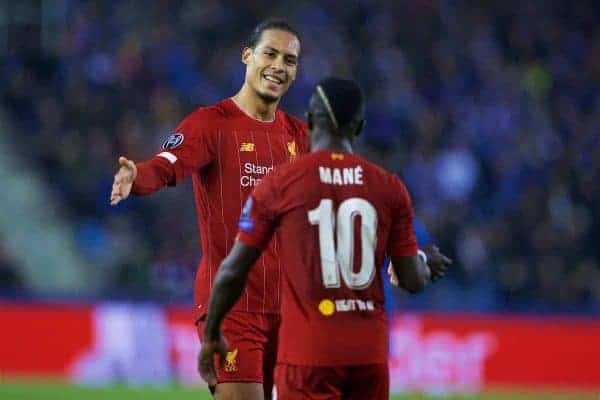 Although a host of Liverpool youngsters seized their opportunity to prove their worth in the League Cup win over Arsenal, the Reds’ senior brigade will return to the fold with immediate effect.

As aforementioned, with the exception of James Milner, Alex Oxlade-Chamberlain, Adam Lallana, Joe Gomez, Divock Origi and Naby Keita, the regular members of the first-team will all head to Villa off the back of a rare six-day break.

And while Dean Smith also rotated his side for their 2-1 win over Wolves in the League Cup, Klopp and Co. will be looking to combine their prolonged rest with their superior fitness to punish a Villa outfit who are susceptible to conceding in the second half of games.

To date, 12 of the 16 goals they have conceded in the league have come after the interval – an area of their game the Reds can look to exploit as five of Liverpool’s last six goals in the topflight have arrived in the second 45.

With the Reds not carrying over any injuries from the side who faced Tottenham, Klopp could look to immediately restore the XI who notched Liverpool’s ninth win of the campaign.

It would see the usual suspects at the back in Alisson, Trent Alexander-Arnold, Virgil van Dijk and Andy Robertson all start, with Dejan Lovren continuing to deputise in place of Matip having found himself ahead of Gomez in the pecking order.

Likewise, in attack Salah, Roberto Firmino and Sadio Mane are the undisputed first-choice trio despite Divock Origi‘s decisive brace which paved the way for the progression to the last eight of the League Cup.

The midfield contingent, meanwhile, remains as the greatest point of debate for Klopp and fans alike as Oxlade-Chamberlain and Keita have come to the fore in recent weeks, while Milner remains an invaluable option across various parts of the ground.

But with Keita’s availability under question and Milner having played the full 90 minutes in midweek, giving the nod to the trio with fresh legs would assist in sustaining the control of the game’s tempo on the road – with a further chance to rotate against Genk on the horizon.

The question on everyone’s lips, however, is whether it is worth risking Fabinho as another yellow card would rule him out of the all-important Man City clash. 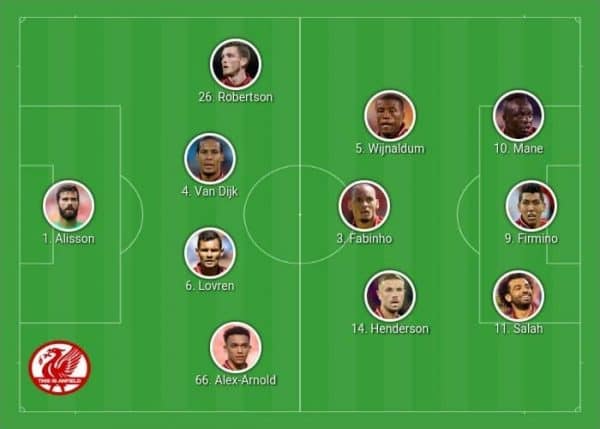 It ensures there is a selection conundrum on Klopp’s hands, to which he admitted as much in his pre-match press conference as he cannot expect a player in the No. 6 role avoiding tackles against Villa.

While Fabinho could certainly play more conservatively, Liverpool cannot afford his game to be impaired by the knowledge of his disciplinary tightrope, and while he is capable of avoiding such fate, as seen against Spurs, you cannot account for the referee’s threshold for challenges.

With that in mind, Klopp could guarantee Fabinho‘s place against Man City and hand his fringe players an opportunity in the starting XI.

The Brazilian’s absence would likely see Gini Wijnaldum drop in as the deepest lying midfielder with Jordan Henderson continuing to play in a more advanced role alongside the regulars in defence and attack.

It means the door then opens for Milner or Oxlade-Chamberlain, with Keita unlikely to come into contention if any doubts continue to linger over his fitness.

And while the former is a reliable option, with three goals and an assist in his last two starts, Oxlade-Chamberlain would provide a goal threat from the middle of the park and offer the forward impetus capable of cutting through a Villa backline who have conceded 16 goals to date. 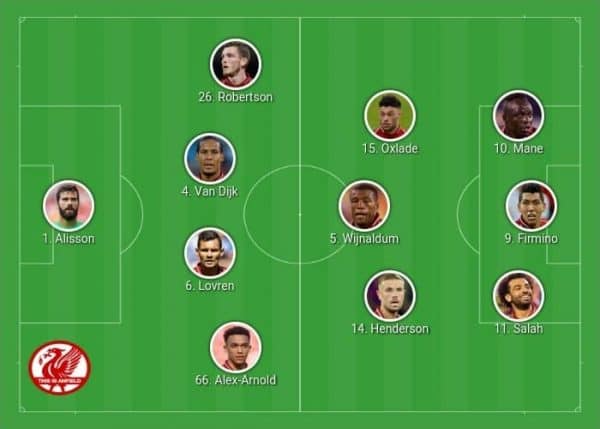 Either lineup is capable of inflicting Villa’s sixth league defeat of the season and while omitting Fabinho is a choice many would rather not make, Liverpool’s squad depth has come up trumps thus far and there’s no reason it cannot do so again.

Another three points in the bank away from home would not only maintain the Reds’ stunning start to the season but it would also set up the opportunity to head into the clash with City with the chance to establish a nine-point gap at the Premier League summit. 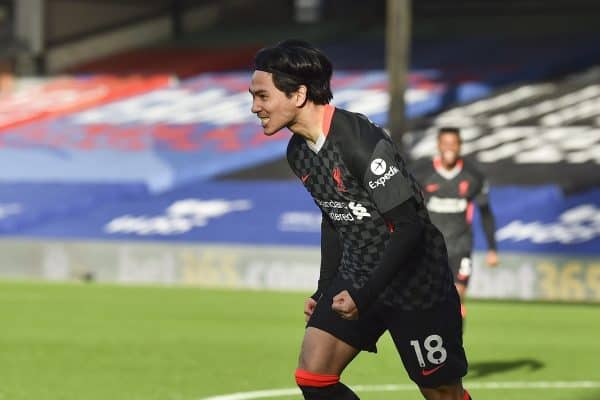