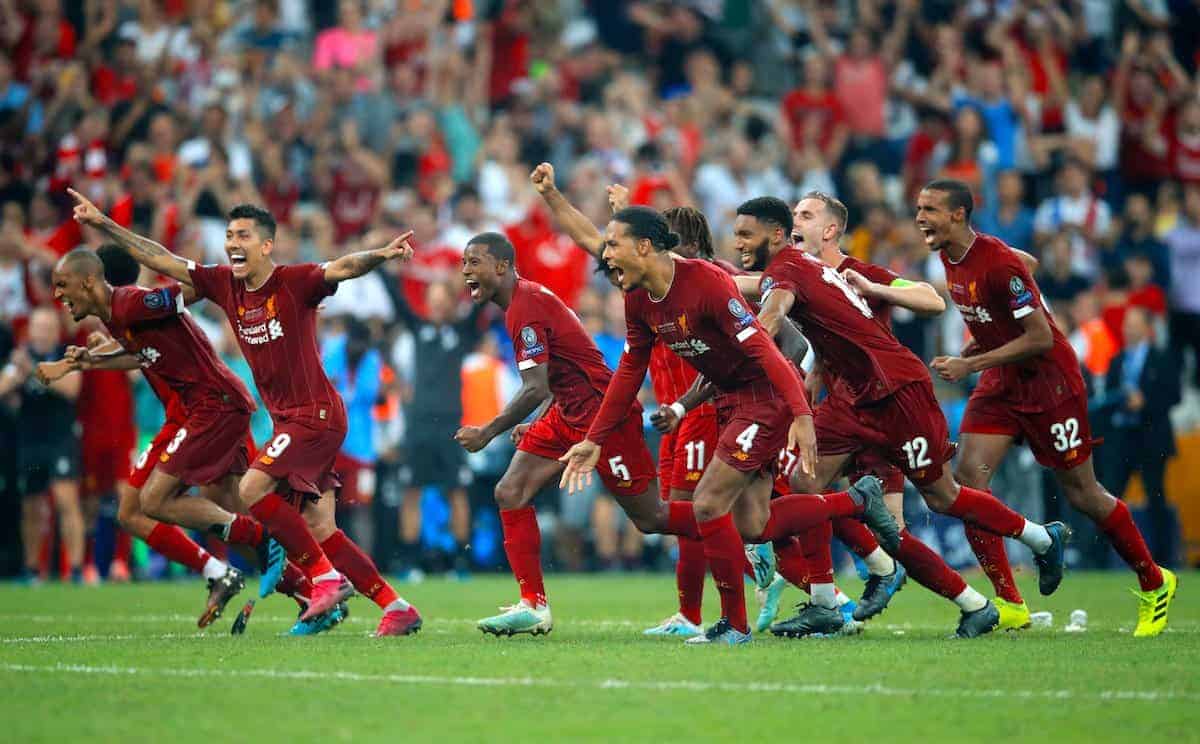 Jurgen Klopp and his players are creating a new golden era for Liverpool, and here Alex Malone delves into the numbers behind their incredible form.

Now that we are almost a third of the way through the season, had you offered any Liverpool fan—or player, or manager—an eight-point lead at the top of the table at this point, you’d have no need to purchase any more gloves.

Eleven wins and one draw is such a phenomenal achievement that it equals to the best-ever start to a top-flight season.

But it’s not just this season; it’s now a single defeat in the last 51 league games across three different seasons.

Let’s take a look at the key reasons and the amazing numbers behind this remarkable, record-breaking team.

The phrase, with very good reason, has well and truly become a catchphrase after being coined by the manager last season.

For too many pre-Klopp seasons, the mentality and self-belief of the team was—with some justification—rather fragile. There was a nervousness about the team when in good positions in vital games which too often resulted in dropped points.

It rarely happens now, and hasn’t for a couple of seasons.

If we are winning, we hold on comfortably. If we aren’t, we always look likely to get something out of the game.

Even when the clock is ticking (such as Old Trafford, Villa Park, Leicester at home recently) and things look bleak, the incredible mentality instilled in to this team means that it’s never a lost cause.

In the three aforementioned game, we scored goals in the 85th, 87th, 94th and 95th minutes to convert two defeats and a draw (one point) into two wins and a draw (seven points) all within the final five minutes of those games.

Furthermore, we have trailed in four of the 12 league games played this season—Newcastle, Man United, Spurs and Villa. Only once did we fail to take all three points.

This calendar year, we have fallen behind seven times; we are undefeated, winning six and drawing one of those games.

It’s all resulted in 42 wins in our last 51 league games with eight draws and just that single defeat; that’s 134 points from a possible 153. Our goal difference is +89, with 121 goals scored and 32 conceded.

It averages out to 2.6 points per games over two successive seasons.

Since the beginning of last season, we have amassed 131 points. Man City have achieved eight fewer with 123 points.

Outside of these two, no other club has broken through the 100-point barrier with Chelsea being the closest with 98.

One defeat in 51 games, while quite remarkable, is even more compelling when you compare it to our ‘big six’ rivals over those same 51 games:

Now, while this article is primarily focused on league results, it would be remiss not to mention that as we’ve been achieving these stunning numbers domestically, we’ve also managed to appear in three European finals in four seasons and are, of course, the reigning European Champions.

Everyone knows that we sit eight points ahead of the chasing pack, but if you dig a little deeper there are some quite eye-opening facts behind our almost-perfect record to date:

– The 2nd-to-6th placed teams we have faced so far have played a total of 60 league games so far this season. How they’ve fared makes for very interesting reading:
— Against the rest of the division – played 55, lost eight
— Against Liverpool – played five, lost five

– It is now 46 games and more than two-and-a-half years since Liverpool lost a home league game.

– We have not lost a European home game during Jurgen Klopp’s entire reign.

– We have won the last six games at Anfield when conceding the first goal, and are undefeated in the last 11 games after conceding first.

– We have won the last 26 games in which we’ve scored first.

– In the last 51 games, we have failed to score only three times while preventing the opposition from scoring 24 times. In the three games we didn’t score, we didn’t lose.

A lot has been said that we have not been as defensively solid this season versus last.

There’s some merit to that with 10 goals conceded in the 12 games versus only five after 12 games last season.

But while goals conceded is more, it is still the third best in the division and the best of the ‘big six’ teams (remarkably, the best record is currently being held by a Brendan Rogers team!)—and this without our first-choice goalkeeper for most of the season.

In the 12 games, we have allowed only 30 shots against us on target which is exactly the same as the first 12 games of last season.

At the other end of the field we have peppered the opposition’s goal with 77 attempts on target compared with only 67 last season.

So, comparatively, we are identical in ‘shots on target conceded’ but 10 shots better in terms of our own shots on target. Here are a few other compelling facts:

– Last season, we conceded two or fewer shots on target in seven of our first 12 games; this season, it’s identical. The most any team has achieved in terms of shots on target against us is five, twice: Leicester away last season when we won the game 2-1, and Norwich this season—when we were already 4-0 up at half-time.

– We have not conceded more than one league goal in any game this season. Given that we average more than two goals per game, there is good reason we win almost every game.

The only area I’m sure the manager and team want to improve is clean sheets.

Considering we barely give up so few chances to the opposition, having conceded in 10 of our 12 league games will be an irritation the lads will want to fix.

An odd anomaly in all of this this is that we are yet keep a clean sheet at Anfield in the league this season—but then again, we are yet to drop a single point there either.

So, all of this adds up to one thing; that this is the most remarkable performance and extended run of results by any Liverpool team in our entire history.

We are witnessing a level of sustained excellence never before seen in terms of games won, points gained and fewest games lost.

We’ve reaped the ultimate European award for the sixth time in the process.

Without in any way counting chickens, one thing is an irrefutable fact: that it is now entirely in our own hands to turn this remarkable run into the one thing that every Liverpool fan craves…

To once again be proclaimed champions of England. Given, the excellence, consistency, quality and resilience of this current squad and our peerless manager, we may never have a better chance.