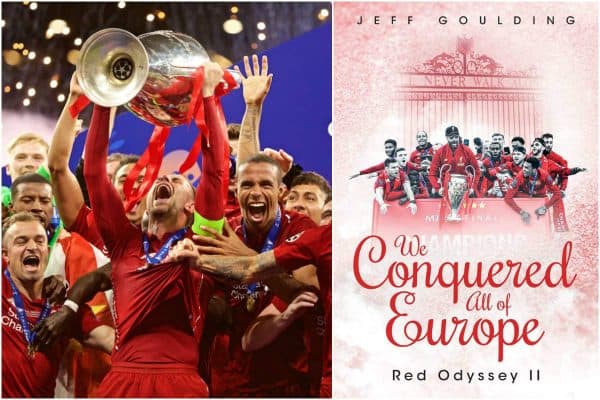 ‘We Conquered All of Europe: Red Odyssey II’ – The enthralling life of a Liverpool fan

From the 2015/16 season through to present day, there has hardly been time to pause and reflect on the incredible rollercoaster ride that Liverpool FC has taken us on, but Jeff Goulding’s book Red Odyssey II does just that.

It is safe to say that there is hardly a dull moment when Liverpool Football Club is involved, with drama, humour, exhilarating victories and heartbreaking defeats seemingly around every corner at any one time.

And since the beginning of the 2015/16 campaign all the way through to current day there has been all of that and more for everyone associated with the club.

As the old cliche goes, the journey is more important than the destination, and while Liverpool reached the European summit in June, the journey they took to get there, and the one ongoing, has both enthralled and enchanted the masses.

It’s a period of time which one can never grow tired of reliving and Jeff’s book ‘We Conquered All of Europe: Red Odyssey II’, a follow-on from the first edition which recounts 125 years of the club’s history, takes you chronologically through the start of Klopp’s reign to the Reds’ triumphant homecoming with Ol’ Big Ears in tow.

Vitally, it is not a simple recount of the events, games and transfers which transformed Liverpool into the machine they are today as one may expect.

Instead it provides a unique first-hand view from around the stands, from not only Jeff but a plethora of supporters who you discover each find varying degrees of significance in moments which have transpired over the last four years.

It’s a journey from the stands, grounded in emotion—with a touch of humour—which is then delicately intertwined with statements from the media and Klopp at the time, with views from former players Jamie Carragher, Jimmy Case and John Barnes also adding another valuable perspective.

And as a result, I found myself transported into the exact moment of time each chapter homed in on; whether that be stood in Anfield for the spine-tingling rendition of You’ll Never Walk Alone against Borussia Dortmund or the ferocious Anfield atmosphere that awaited Man City in Europe.

Instantly it makes you not only aware of how much has transpired in such a short space of time, but how quickly it has all come to pass—from a side and fanbase devoid of belief to collectively conquering all of Europe.

Additionally, there are tributes throughout for Liverpool legends, such as Tommy Lawrence and Ronnie Moran, who helped make the club what it is today.

And so, while the book is grounded in the present, the homage to those who recently passed away and were each a trailblazer in their own right is the perfect nod to the club’s rich history.

The people, the memories created and shared together is what makes Liverpool FC what it is and this book brilliantly captures the enthralling life of a Red.

Jeff Goulding (@ShanklysBoys1) is the author of three books, ‘Red Odyssey: Liverpool FC 1892-2017’, ‘Stanley Park Story: Life, Love and the Merseyside Derby’ and now ‘We Conquered All of Europe: Red Odyssey II’, which you can buy on Amazon here.