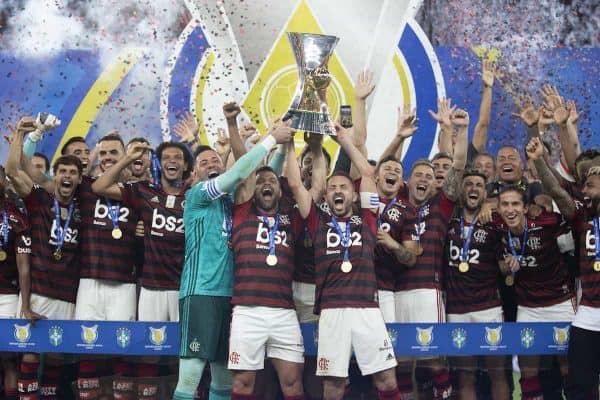 Flamengo: The South Americans with European experience confident of an upset vs. Liverpool

Liverpool are preparing for a Club World Cup final for the ages, in which they will meet a Flamengo side whose supporters still celebrate the last time they met the Reds on the world stage.

While the European sides don’t usually take this competition too seriously, many of the teams from the other continents taking part are the complete opposite in their mindset, especially the South Americans for whom this is one of the biggest tournaments in their season.

But Liverpool, both the fanbase (generally) and the club, have shown a desire to win this trophy and are taking it seriously, as shown by the squad they’ve taken to Qatar in comparison to that which turned out in the League Cup tie against Aston Villa. And rightly so.

The opportunity to be crowned world champions for the first time in the club’s history is being embraced, as they look to become the first English winners of this tournament since Man United in 2008.

Final opponents Flamengo should not be taken lightly, something Liverpool will have learned in their semi-final clash with a spirited and well-organised Monterrey side, but the Brazilian and South American champions could provide a different kind of test.

There is a European feel to this Flamengo side, not least in the shape of their Portuguese manager, Jorge Jesus.

The Corinthians side managed by the Tite, which defeated Rafa Benitez’s Chelsea side in the 2012 Club World Cup also had something European, but theirs was more of a tactical rigidity.

Flamengo, on the other hand, finished top of the Brazilian Serie A table by some distance thanks to their attacking prowess than any defensive solidity.

They scored 22 goals more than the next best attacking side, Gremio, but only had the 6th best defence in the league conceding 37 in 38 games.

Flamengo are more open and attacking and have a number of weapons up front. The highest-profile of these is Gabriel Barbosa, or Gabigol as he is sometimes known, who is on loan at the club from Inter.

He’s supported by Bruno Henrique, Éverton Ribeiro and Uruguayan playmaker Giorgian De Arrascaeta who form a potent attacking threat, while Diego also provides an element of creativity and unpredictability but usually from the bench.

“Flamengo have been an unstoppable force under Jorge Jesus this season and were deserved winners of both the Brasileirão [league title] and Copa Libertadores,” says Louis Smith, a South American football writer for World Football Index.

Like Liverpool, Falmengo’s full-backs have been an important part of their attacking play and here there are more European links in the shape of former Atletico Madrid left-back Filipe Luis, and ex-Bayern right-back Rafinha.

“This sees them with eight men in the opposition half at times,” adds Smith.

“When they lose the ball, they win it back almost instantly by suffocating their opponents’ space.”

That type of pressing will also be familiar to Liverpool fans, but it’s also something against which Jurgen Klopp’s side will fancy their chances.

Liverpool usually do well against attacking sides who play a high line, and when the pair meet in the final of the Club World Cup, it could make for an exciting game.

One of the biggest victories in Flamengo’s history came against Liverpool back in 1981 in the Intercontinental Cup — a precursor to the Club World Cup which pit the Copa Libertadores winners against the European Cup winners.

The Flamengo XI on that day contained Brazilian legend Zico, and fellow international stars Junior and Leandro, who all went on to be part of the feted 1982 Brazil World Cup side.

Liverpool had defeated Real Madrid in Paris that year to win their third European Cup, but a full-strength Reds lineup containing Alan Hansen, Graeme Souness, and Kenny Dalglish were unable to overcome the South American champions, who ran out 3-0 winners in Tokyo.

Flamengo fans sing about that victory to this day and could be heard doing so after this year’s Copa Libertadores final victory against River Plate in Peru.

South American teams were the dominant force in world football around that time, winning the Intercontinental Cup every year between 1977 and 1984, when Liverpool again lost out, this time to Argentine side Independiente.

“If Flamengo does get to the final, other than the recent Libertadores final it will be their biggest game since their historic victory in 1981,” says Smith.

“Zico was the star for the Brazilians on that day, and the Reds didn’t have an answer to him.

“Following the victory, a song emerged: ‘Em Dezembro de 81’. They sing about running rings round the Englishmen, and reference being the only world champions in Rio de Janeiro, something which stands to this day.”

In December 1981
You ran rings around the English men
You beat Liverpool 3-0
It left a mark on history
In Rio there’s no other like you
Only Flamengo is world champion
Now your people want the world [club world cup] again.

Flamengo’s semi-final against Al Hilal showed their strengths and their weaknesses. They initially struggled against the AFC Champions League winners, conceding the first goal of the game and were lucky not to concede more.

As they did in the Libertadores final against River Plate, Jorge Jesus’ side came back to win, though not as dramatically as they had in Lima.

The introduction of former Werder Bremen and Wolfsburg playmaker Diego added more guile to the Flamengo team, and they ran out 3-1 winners against Al Hilal.

Bruno Henrique was very impressive, assisting two and scoring one of the three goals in the semi-final. The 28-year-old has recently been named in the Guardian’s top 100 players of 2019 along with his team-mate, Gabigol.

Gabigol’s temperament can occasionally let him down, and if Liverpool can get under his skin it could go one of two ways: motivate him to get his name on the scoresheet, or lead to sulking and poor discipline.

Confident of an upset

Flamengo fans, who are already in Doha in their numbers, will come into this game with confidence that history can repeat itself and they can defeat Liverpool for a second time on the world stage, 38 years after their famous victory.

“Not many Flamengo fans expected to achieve what they already have this season, and for that reason, they believe they can take on anybody,” adds Smith.

“After the victory in the final, fans watching in the Maracana delivered a warning message to Liverpool saying: “watch out it’s ours!” in reference to the Club World Cup.

Flamengo have won the Copa Libertadores ?

And now they want to beat the champions of Europe to the Club World Cup! ? pic.twitter.com/J7Ife47JTE

“Flamengo has the potential to cause an upset however unlikely it seems on paper.

“The pace and skill of Bruno Henrique is something which can frighten the Liverpool defence and with the finishing ability of Gabigol, he only needs one sniff at goal but they haven’t come up against a quality side like Liverpool before.”

“River Plate was the toughest side they have played this season and it was the first time a team has matched their pressing game.

“This caused Flamengo many problems, particularly in the first half when Willian Arão and Gerson lost possession on a number of occasions after being pressured.

“If Flamengo adopts their high line against Liverpool then they could be in for a long afternoon with the likes of Mohamed Salah, Sadio Mane, and Roberto Firmino ready to pounce at any opportunity.

“I do expect Flamengo to score but I can’t see them winning. If Liverpool doesn’t underestimate their opposition, they should win comfortably by three or four goals.”

This is a historic game for Flamengo, and for the large number of fans they have across Brazil.

Many football fans around the world were made aware of Flamengo’s huge fan base when the celebrations following their Libertadores triumph were beamed around the world, and in this regard, Flamengo are one of the biggest clubs on the planet.

Stories of their previous victory against Liverpool have been passed down through generations, and now a new generation of the Nação Rubro-Negro (the red-black nation) want their own piece of history to celebrate and tell stories of.

It could also be a historic moment for Liverpool as they look to win their first inter-continental tournament. Reds across the world should take their cue from the Flamengo fans and, should they win, celebrate in the same manner.

If they want to win, Liverpool need to respect the quality of their opposition and what this game means to their fans. Maybe a song mentioning Flamengo will be sung on the Kop in years to come, forging further links between two of football’s global powerhouses.

The Club World Cup might not be taken seriously by some, but this is about as meaningful a global matchup as there is.