The media praised Jurgen Klopp’s rotation and lauded the displays of the incoming Reds and Sadio Mane in Liverpool’s 5-2 derby-day rout of Everton.

Another special night delivered by this truly special football team.

The Reds produced an attacking masterclass to blitz the Blues and maintain the eight-point lead at the top of the table.

Divock Origi’s brace added to strikes from Xherdan Shaqiri, Mane and Gini Wijnaldum did the damage, as the Reds fired in some absolutely world class goals.

It was a sweet victory that will live long in the memory, and one that also saw Klopp’s side set a new club record for the longest unbeaten league run – a staggering 32 games.

This is what the media made of a memorable derby-day victory at Anfield. 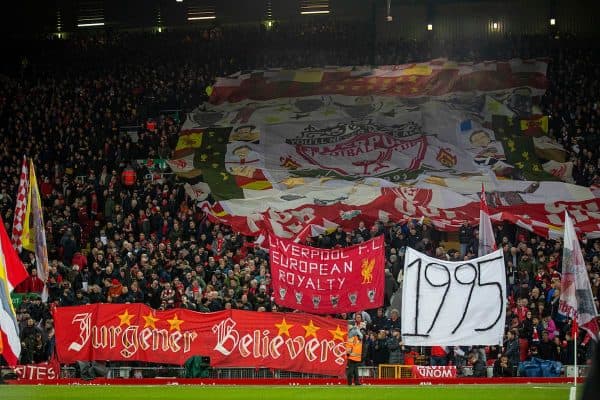 To assess as such was the Telegraph’s Chris Bascombe, who believes that the gap in quality between the two side’s is the biggest it has ever been:

Never has the gap between these clubs looked so stark.

The BBC’s Phil McNulty thought it was shown in the fact Liverpool won so emphatically without even fielding a full-strength side:

Liverpool, who lost only one Premier League game since the start of last season, were not even at full tilt or full strength and yet eventually overwhelmed their struggling Merseyside neighbours.

The Liverpool Echo’s Paul Gorst focussed on how the Reds have completely dominated the derby across the decade:

Liverpool’s longest unbeaten run against any team in the Premier League now stands at 18 games and that will extend into 2020 as Everton‘s annual Anfield hardship continues.

Less than a mile separates these two old enemies, but on the field, here and now, they are plainly light years apart. A whopping 29 points is now the difference between them in the top flight. They are heading in total opposite directions.

First off, McNulty labelled the performance “an impressive demonstration of the power assembled by Klopp” and feels Liverpool’s squad depth puts the Reds in a strong position for the campaign:

Liverpool were nowhere near their best, not that they needed to be, but this was an impressive demonstration of the power assembled by Klopp that has put them in such a powerful position in the title race.

The Mail’s Martin Samuel thought the performance of the rotated side actually eclipsed what the ‘first choice’ team has been producing:

The replacements did not merely step up, they hit levels that actually improved on what has been delivered recently.

The Mirror’s Andy Dunn labelled Klopp’s surprise selection “a masterpiece” and praised Mane for stepping up and leading the rotated team:

But then, this. This masterpiece.

The idea came from Klopp with a selection no-one predicted, the execution came from the beautiful brush strokes of Sadio Mane.

Writing for Goal.com, Neil Jones bemoaned the knee-jerk reaction to the selection, and stated that there needs to be greater trust in Klopp’s judgement and the fringe players who are introduced:

When will Reds fans learn to trust Klopp’s judgement? No sooner had Liverpool’s teamsheet dropped than the doom-mongers had surfaced.

He’d gambled again, he’d rolled the dice when all he needed to do was collect the points.

Samuel said the display showed that there is no such thing as a “weakened Liverpool starting XI” and thinks Klopp has “the best assembled squad in the country”:

Equally this was a win that shows there is no such thing as a weakened Liverpool starting XI unless Jurgen Klopp plays the youth.

Liverpool have the best assembled squad in the country and while, famously, intensity is its identity, so too is depth.

And following on from that, Jones thought Liverpool proved a point that their squad depth is not a weakness, contrary to popular belief:

Liverpool’s squad strength is often talked about as a potential weakness, but the evidence is to the contrary.

The Mirror’s Alex Richards assessed that the displays of those introduced was reassuring as it showed they can be trusted to deliver:

For Klopp and his side, it’s a boost to have his second choice stars making their mark, and again proving they can be trusted.

Meanwhile, Samuel believes every opponent will now fear the Reds regardless of what XI Klopp names:

What we can say with some certainty now is that whatever team Liverpool send out to cover these December and New Year fixtures will be feared.

Yes, Salah, Firmino and Mane remain the regulars – but what opponent will feel relief at the sight of Origi’s name on the team sheet? Not Everton in the FA Cup, that’s for sure.

Reporters praised the incoming players for taking their chance to shine, particularly Origi and Shaqiri…

ESPN’s Tom Fenton believes that Origi and Shaqiri’s performances will have been the “most pleasing aspects” of the night for Klopp:

Jurgen Klopp took a big risk in resting the likes of Mohamed Salah and Roberto Firmino, but the performances of their deputies — Divock Origi and Xherdan Shaqri –will perhaps be the most pleasing aspect of tonight’s win.

Bascombe noted how the freshness of Origi and Shaqiri made a big difference to the sharper attacking display, and should now allow the minutes of the first choice trio to be better managed:

The freshness of the attacking players vindicated his strategy. This bodes well given the natural fatigue of his first-choice picks.

Jones singled out Shaqiri for praise, assessing that the Swiss “looked as sharp as he ever has” in a Liverpool shirt despite his lack of game time this season:

The Swiss star had only 15 minutes of competitive action this season prior to Wednesday night, but you’d never have known. Shaqiri, like he did in that memorable Champions League win over Barcelona, came out of the shadows to hog the limelight.

He scored Liverpool’s second goal and looked as sharp as he ever has in a red shirt.

Standard Sport’s David Lynch explained why Shaqiri’s goal will have caught Klopp’s eye and could be the key to the Swiss securing more starts:

And that his goal came from the sort of movement in behind you don’t often see from a player more comfortable in deep positions will have done no harm to his chances of starting more games going forward.

And Gorst stated that this fine performance must act as the kick-start for Shaqiri’s Anfield career:

This here must be a launchpad for his Liverpool career. He will have a big role to play between now and May. This was proof of that.

The watching journalists were in awe of Mane’s stunning display… 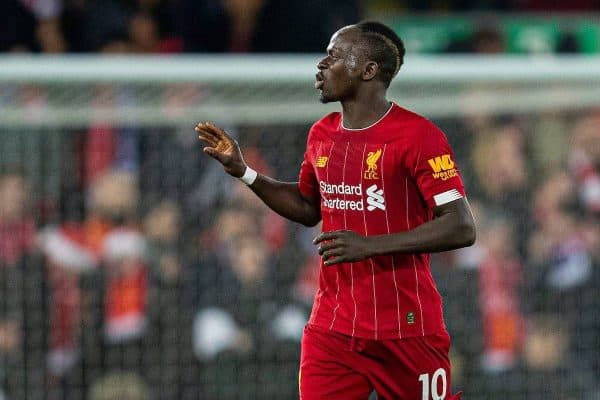 ‘A performance Lionel Messi would have appreciated’, wrote Dunn:

No wonder Lionel Messi, clearly as good a judge as a footballer, voted for Mane as FIFA’s World Player of the Year.

Samuel labelled Mane’s display “the finest individual performance of the season so far”:

Mane was brilliant, flawless even. He took Everton apart with arguably the finest individual performance of the season so far.

If there has been a better display this season than Mane’s against Everton, it has passed most observers by.

Fenton thought Mane proved just how complete a player he is and praised the No.10 for still delivering at such devastating levels even without Roberto Firmino and Mohamed Salah:

The victory also highlights just how good of player Mane has become: he can create, he can score — even without the help of his Egyptian and Brazilian running mates.

ESPN’s Nick Miller is in no doubt that Mane is now a “world class” performer:

Now he has blossomed into one of Liverpool’s many world-class performers, and some of his touches here could be ranked among the absolute finest.

Fenton picked a negative with how the Reds twice allowed Everton back into the game through their own sloppiness:

On the flip side, Liverpool were once more left embarrassed by defensive errors and suspect marking.

Just when the home side looked like they would go on and secure a landslide win, Everton would creep their way back into the game — not through skill or guile — but instead, due to sloppy mistakes from the backline.

But Richards put the leaky defence down to the gung-ho nature of Trent and Andy Robertson, and feels the roles of the full-backs should not change in attempt to tighten up:

And for Klopp, how to you rein in the likes of Trent Alexander-Arnold – who assisted the fourth with a break down the left wing – and Andy Robertson, when they are so key to the way the team attacks?

It’s a balancing act, certainly. And a record of 43 points from a possible 45 shows that it’s working right now, so why not keep going with it?

Similarly, Lynch thinks the lack of clean sheets is not as big a problem as is being made out due to the defensive injuries the Reds have suffered throughout the season:

But when that unwanted record is held by a team who have won 14 out of 15 fixtures in carving out a huge lead at the top of the Premier League, you start to wonder whether it matters.

That the Reds are where they are in the league despite having lost Alisson Becker, Joel Matip and now Fabinho to injury for long periods means they shouldn’t get too wrapped up in their ‘problem’ at the back.