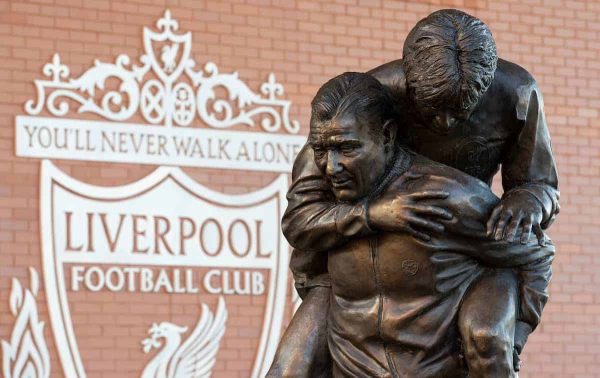 Paisley, Liverpool’s most successful ever manager, spent 50 years at the club as player, coach and manager, winning the league title in six of his nine seasons in charge.

Three European Cups, three League Cups, a UEFA Cup and a UEFA Super Cup, plus six Charity Shields, meant 20 trophies in nine years between 1975 and 1983 – achievements that have never been matched by any manager in England.

Before that, Bob played 277 games for the Reds, lifting the league title in 1947, before going on to coach as part of Bill Shankly‘s legendary bootroom team.

Finally, a statue has been unveiled at Anfield to commemorate the man many Reds call ‘Sir Bob.’

The new statue is located at ‘Paisley Square’ at Anfield, outside the club shop on the Kop and the Main Stand corner.

It depicts an iconic image of Bob during his time as physio in 1968, carrying an injured Emlyn Hughes off the pitch.

At its unveiling on Thursday, Paisley’s son, Graham, said: “It’s been a very moving process to be a part of and to see the statue from its original design to the physical structure we can now see here at Anfield.

“We’re incredibly grateful for this tribute to dad’s life, and the whole family is really happy with the result.”

The statue was created by local sculptor Andy Edwards and members of Paisley’s family, along with Emma Lynn Hughes, Emlyn’s daughter, and club chief executive Peter Moore, unveiled the tribute in Paisley Square at Anfield ahead of the Red’s fixture against Southampton this weekend.

Paisley passed away in February 1996 at the age of 77, his legacy at Liverpool will forever live on.