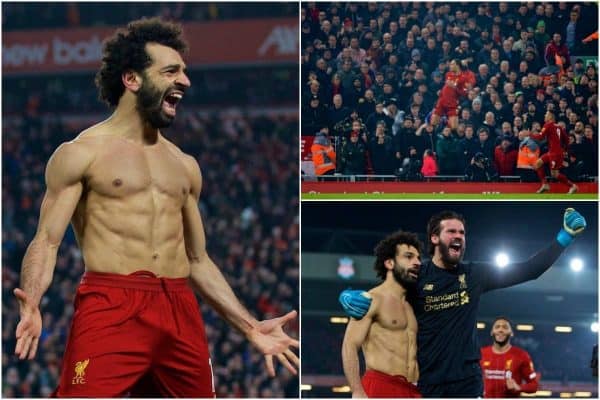 The Reds faced their most bitter rivals, looking to pull further clear at the top of the table after slip-ups by Man City and Leicester.

Fabinho made a welcome return to the matchday squad, having not featured since the 1-1 draw with Napoli back in November, making a late cameo appearance.

Meanwhile, the returning Joel Matip remained on the bench, as did Takumi Minamino who continues to wait for his first league appearance for Liverpool.

It was a frantic start to proceedings, but Liverpool went 1-0 up thanks to Virgil van Dijk‘s bullet header, celebrating in style in front of the Anfield Road end.

Roberto Firmino thought he had added a second for the hosts less than 10 minutes later, but Van Dijk was harshly adjudged to have fouled David de Gea.

Liverpool were dominant, with a dramatic sunset on a misty day on Merseyside providing a spectacular backdrop at Anfield.

In a tense finale, Klopp grew increasingly edgy, as did the entire Anfield crowd, with United threatening to score an equaliser.

And it was left to Mohamed Salah to deliver an epic conclusion to the game, though, as he latched onto Alisson‘s delivery, raced through and fired past De Gea.

Alisson was the first player to celebrate with his teammate, bringing back echoes of Pepe Reina and David N’Gog against United back in 2009.

After the final whistle, Henderson and Salah basked in the glory of victory after the game, having been interviewed on the pitch.

Next up for Liverpool is a tough trip to Wolves on Thursday evening – another win would feel huge, against a dangerous team.