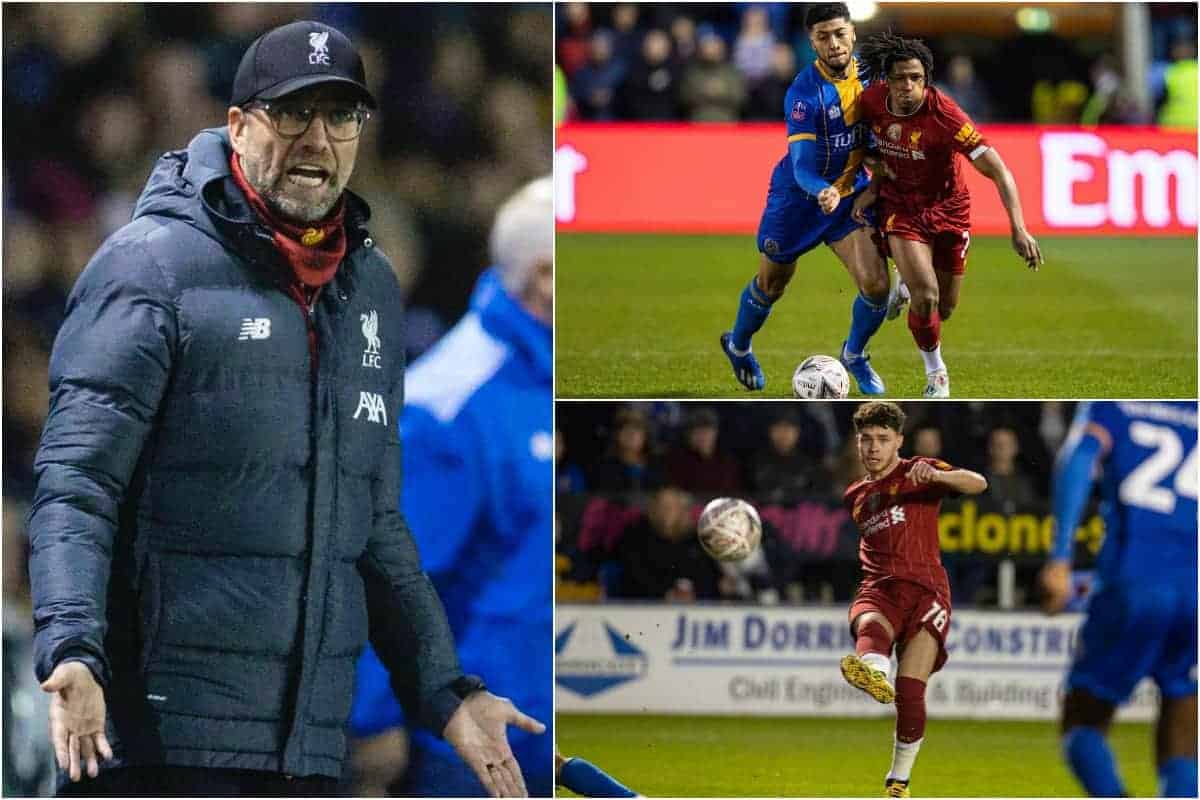 Liverpool will be forced to play out a replay with Shrewsbury after surrendering a two-goal lead on Sunday evening, leaving plenty to discuss.

It an evening whereby on paper Liverpool were heavy favourites to head into the fifth round and up until the 64th-minute mark, the Reds were well on their way.

Curtis Jones and an own goal from Donald Love had established a two-goal buffer, but complacency and errors crept in and a Jason Cummings double within the space of ten minutes turned the tie on its head.

Shrewsbury had looked the more likely side to find the breakthrough in the latter stages as the Reds struggled to work the ball out of their half.

Roberto Firmino, Mohamed Salah and Alex Oxlade-Chamberlain would all be introduced to try and prevent a replay but Anfield now awaits, where a youth side are set to take centre-stage.

Here, This Is Anfield’s Joanna Durkan (@JoannaDurkan_) is joined by Aaron Cutler (@aaron_cutler) and Matt Ladson (@mattladson) to delve into the highs and lows from the outing and discuss the approach to the replay.

Aaron: Positives were hard to come by in a disappointing performance.

We certainly have Adrian to thank for earning a replay, the Spaniard pulled off some vital saves at vital times and reaffirmed his status as the best under-study in the Premier League.

Elsewhere both Pedro Chiravella and Neco Williams showed promise in the opening exchanges but faded after the interval.

In fairness, they were hardly helped by the senior pros around them…

Joanna: It was one of those cup nights reminiscent of a few years back; frustrating and disappointing.

But Adrian rightly deserves the plaudits for his display, brilliant saves which ensured we are still in the tie at all – easily the only senior player to walk out of the game with credit to his name.

Chirivella was a standout in the first and Jones’ finish was another nod to his confidence and ability, but like their fellow teammates saw their influence wane as Liverpool lost control.

But all credit to Shrewsbury, they had a plan, stuck to it and in the end, executed it to take it back to Anfield. 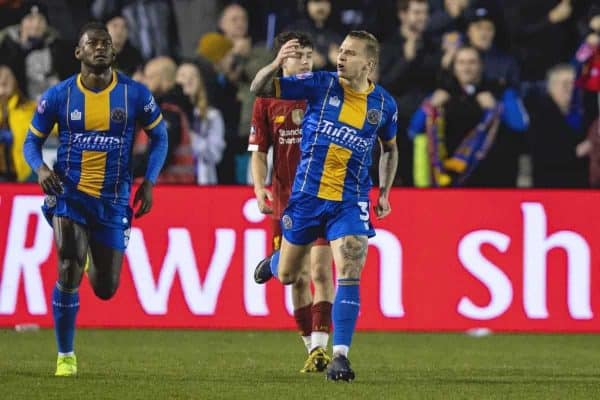 Matt: I think Joanna has nailed it there, Shrewsbury had their plan and worked it perfectly – Sam Ricketts told them to stay in the game and then they could bring on Jason Cummings to get a goal and that’s exactly what happened x2.

For us, Chirivella, Minamino and Jones looked lively in the first half, but like the rest of the team struggled in the second 45 when the home side upped their game. That’s a massive learning curve for these players. 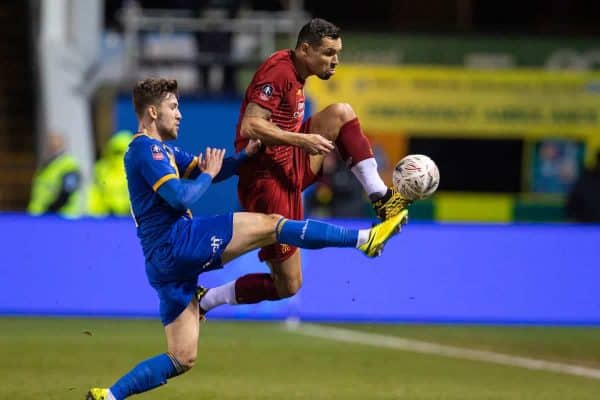 Aaron: If anything Liverpool were guilty of arrogance. The first 25 minutes were so easy they quickly grew complacent, wrongly believing they could stroll to victory in second gear.

A worrying lack of game management was also evidenced the longer the game wore on. Suddenly we were second to everything and losing possession all too readily.

Our more experienced players each had off days. While it’s true to say the likes of Matip and Fabinho are working their way back to fitness there is no excuse for some of the slack passing and indecision on display.

Dejan Lovren‘s tendency to panic when the going gets tough/psychical was also obvious.

All that said we’d probably have progressed were it not for some shoddy officiating. Far more would be made of the penalty award had it been at the opposite end. 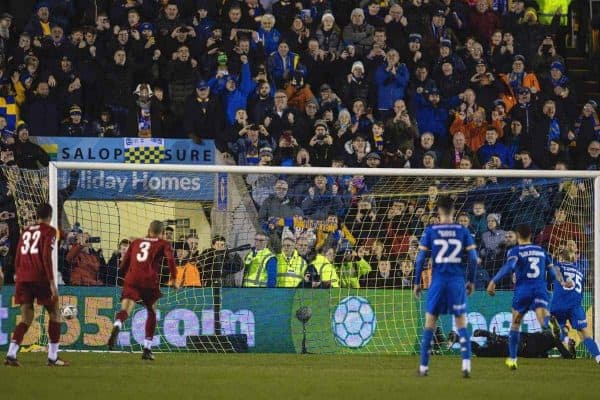 Joanna: There is certainly a touch of leniency for Lovren, Matip and Fabinho considering they’re only just returning but as Aaron said, some of their decision making – or lack thereof – was inexcusable at times.

They put us into more trouble than I can count and the senior plays did little in helping their younger teammates gain a foothold.

It’s not a performance or result which is burning a hole inside me as it’s clear where our focus lies, but it’s certainly a frustrating position to find ourselves in as we had a two-goal lead and simply thought that it was game over.

Matt: Lovren is too aggressive in games like this, as though he’s trying to show how he’s the better defender against a lower-level opponent, then ends up completely into their hands. He really should know better by now.

Rusty would be an understatement to describe Fabinho‘s performance. Klopp said post-match that the returning trio need playing time to find rhythm again, which begs the question of why not give them that playing time in the replay at Anfield?!

And the replay, is it a hindrance or another opportunity? 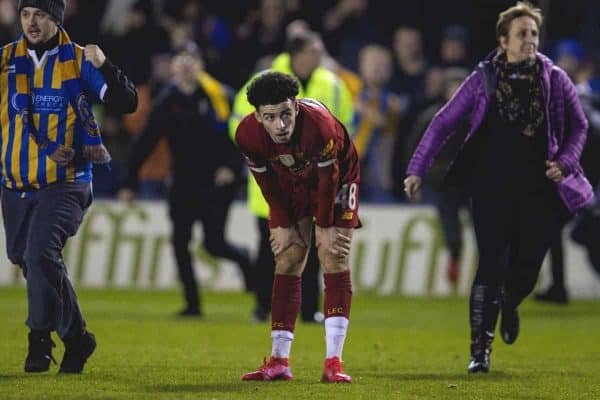 Aaron: I’m disappointed that Jurgen has stated no senior players will be involved for the replay.

I felt fielding the U18s for a League Cup tie was a one-off and a justifiable stance given the circumstances. I don’t agree with devaluing (discarding) the FA Cup in this manner.

No side, however successful, can dismiss a trophy. The youngsters may well progress but why take the risk?

The decision is even more puzzling given those returning from injury (Milner, Keita, Shaqiri et al.) would benefit from game time. 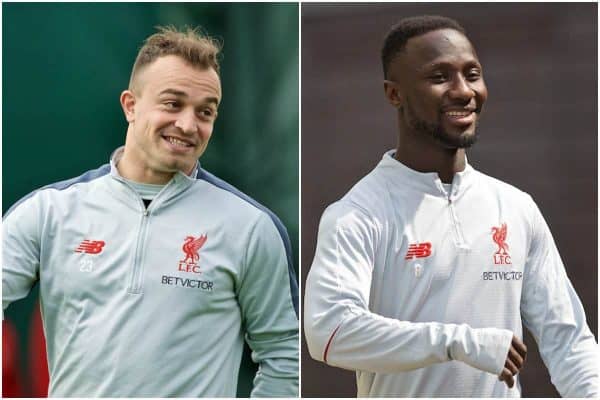 Matt: I completely understand Klopp’s stance, but not sure I agree with it entirely. This will be a major distraction for the next fortnight and if he does indeed go on holiday, pictured in the sun while the under-23s are playing at Anfield, it will be front-page news and not a good look for him or the club.

I imagine players like Adrian would rather play and progress, get themselves a game in the fifth round in the process.

Personally, I’d prefer Klopp had a re-think on this approach. He’s made his point.

The likes of Firmino, Salah, Mane, Henderson, Van Dijk, Trent, Robertson and Wijnaldum can all have their holiday as planned, but there’s no need to play an under-23s side and have Critchley manage the game.

With the title likely to be sewn up early, there’s no reason we couldn’t reach the latter stages of the FA Cup and put some more silverware in the cabinet, why would we give that up? 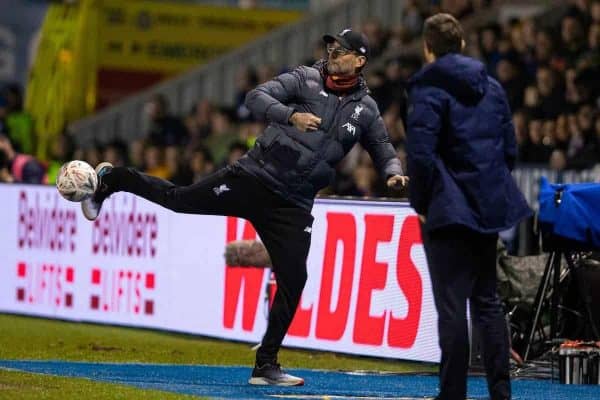 Joanna: It’s a noble stance to take from Klopp as the demand on players is ridiculous and the winter break was meant to provide a timely relief and for that, I can understand giving his regular XI a break.

It’s another opportunity for the young players and an invaluable experience at Anfield, but I have to agree with Aaron and Matt that it’s a game perfect for those returning from injury or needing game time.

I want to win as much as we can this season and that includes the FA Cup.

Most will take offence from the fact that Klopp said he won’t even be there and it’ll be interesting to see if his stance changes, but at the end of the day it is a self-inflicted problem having relinquished a healthy lead.