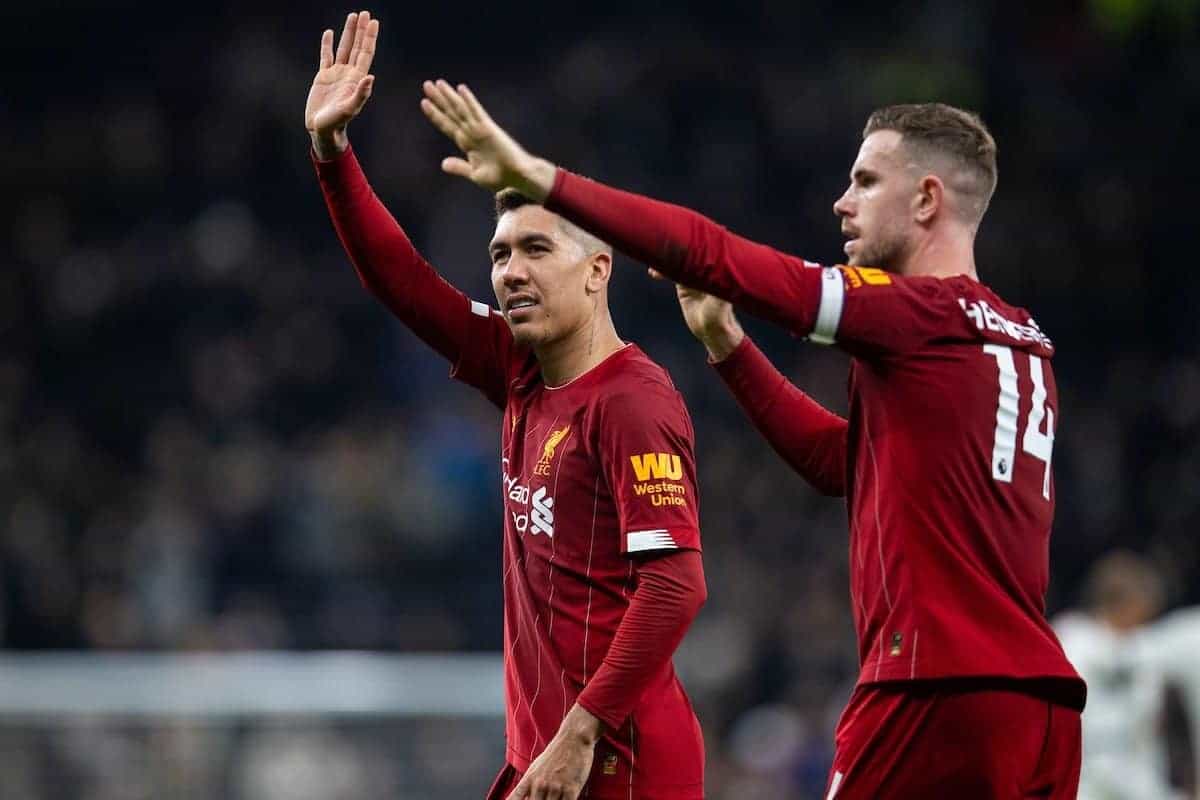 Liverpool secured another hard-fought victory on the road thanks to Roberto Firmino, and fans were left amazed at their record-breaking Reds.

Jurgen Klopp’s side made the journey south to meet Tottenham at their new stadium for the first time, and they left with all three points.

The opening term saw Jose Mourinho’s side sit deep and park the bus, as expected, leaving the Reds to dominate possession and consistently look for the opener.

And while a number of clear cut chances came the way of the Reds, it was Roberto Firmino who found the breakthrough with a brilliant left-foot finish across the ‘keeper.

The second term was one which saw Spurs come to the fore as Liverpool conceded possession all too easily, but Klopp’s men held on to notch their 20th win of the season.

The result establishes a 16 point lead over second-placed Leicester and sees the Reds secure the record of the best-ever start to a season with 61 points from a possible 63.

After a handful of missed chances, all those involved in Bobby’s opener were rightly lauded…

That touch to take it away from the defender is world class.

And that is the brilliance of Roberto Firmino…effortlessly wrongfoots Tanganga, opens his body up, lets Salah pass come across him, drives in left footed. Anticipation, technique, composure. #lfc #TOTLIV

If ever a goal was coming, there it is. Firmino with an emphatic one.

Henderson with one of the bravest headers you'll ever see, neat interplay between Salah and Firmino see Liverpool take a deserved lead.

Absolute stormer of a first touch from Firmino there. Nice finish too. Lovely pass from Salah as well.

Henderson putting his head where it hurts. Leader.

Very difficult to criticise anything about this #LFC team at the moment but if you were to point out one thing, it's that they are sometimes a little too happy to look to control when only one goal in front. Tottenham just waiting for the error in possession here.

“Complacency crept in, typical of a Mourinho game. Bores you into mistakes.”

Maybe Liverpool should try not turning the ball over any more.

In the end, however, there was plenty of praise handed out, with Gini and Mane, in particular, impressing…

Gini MOTM for me. Absolutely immense on and off the ball.

Sadio is also the greatest player of all time.”

Gini and Mane's workrate today was unreal. Class by both of them

Big win. 38 matches unbeaten in the league, best start to the season by any team ever. Can't complain

Sadio Mané goes from completely stationary to the other player literally falling over as fast as anyone in the game.

What a tackle from Van Dijk on Alli. Sensational.

The goalie. Caught everything. Wijnaldum. Ran everywhere. Up the Reds.

Gini would find space to turn inside an ice cube

Gini's contract may need sorting after this performance

And after making the best-ever start in a topflight campaign, there was no hiding away from how special this Liverpool team is…

Proper Liverpool that, proper Klopp Liverpool. Dug in, fought for it. Massive three points against a team fuelled on a Mourinho desire to topple the run. Something else this side, every week a different aspect impresses. #LFCdigest

Most points ever accumulated in 21 games across the top 5 leagues of European football.

20 wins and a draw from 21 matches for #LFC. Didn’t make it easy for themselves but a moment of quality – and some excellent goalkeeping from Alisson – the difference.

We didn’t make it easy for ourselves at times second half but that’s a massive, massive win.

Blown away by how hard we worked to win the ball back. A special football team. #TOTLIV #LFC

The record for the best start to a season by any team in English football history – 20 wins and a draw from 21, on the back of 9 straight wins last season. Tyler says it's the best in the history of all the major leagues. This team is a monster!

Job done. Again. Liverpool with another clean sheet but more importantly the goal from Bobby Firmino that gives them another three points. The World and European Champions are well and truly top of the league – 16 points and a game in hand.

Made that hard work for ourselves. Every Spurs chance was a result of our mistakes. We seen it out though, yet another win. Never take Alisson for granted. Up these reds.

Not the prettiest performance but my god what a run we are on. Absolutely phenomenal and a honour to be witnessing it unfold. 61 out of 63! Unthinkable.