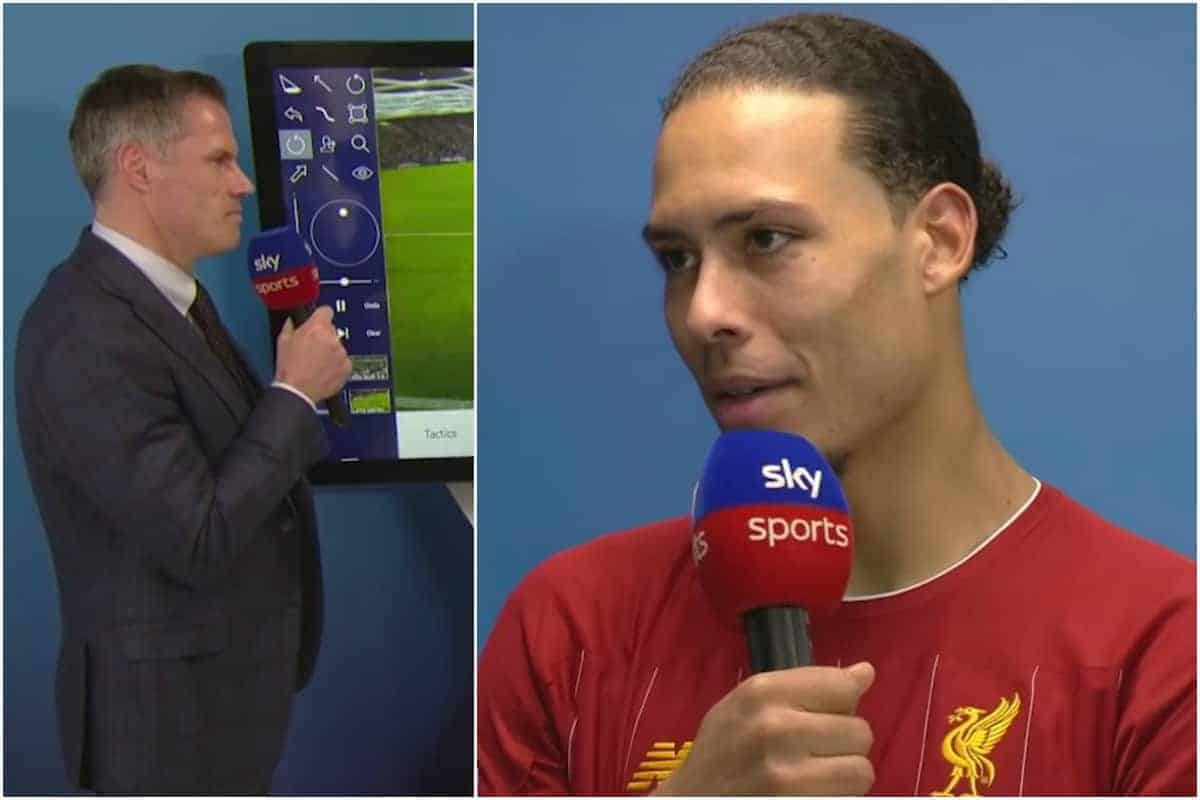 Virgil van Dijk was left scratching his head over another VAR decision, but refused to entertain any title talk as another test lies around the corner.

Liverpool’s No. 4 was involved in two of the biggest moments in the win over Man United, with his thunderous header and ‘foul’ on David de Gea both emerging as talking points after the game.

Van Dijk set Jurgen Klopp‘s side away with his fourth goal of the campaign having successfully preyed on United’s susceptibility from set-pieces, capitalising on a zonal approach to swat away both Fred and Brandon Williams with ease.

And in an interesting post-match interview with Jamie Carragher, the Dutchman touched on the Reds’ pre-determined intent to attack the near post and the constant threat Trent Alexander-Arnold poses from dead-ball situations.

“We tried to find the near post and it worked. Obviously a fantastic delivery and the timing was there so I’m very delighted,” Van Dijk explained.

“It’s never easy on set-pieces, I’m always being marked by the strongest defensive headers [in the oppositions’ team] and today it was two opponents.

“It’s always difficult but when the timing is right and the delivery is always good from Trent, normally, then it is a big chance.” 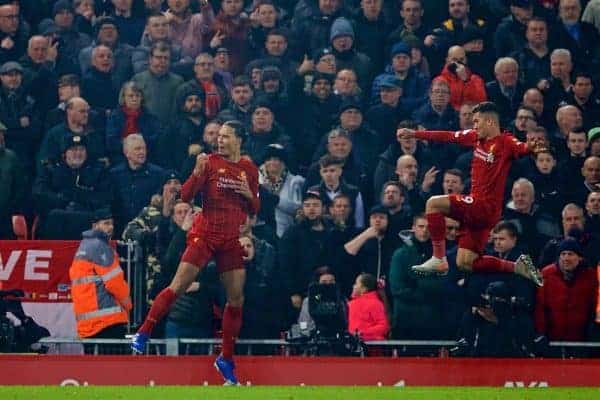 And with the Reds tearing United apart, a second goal looked to have been added to the tally by Roberto Firmino merely 10 minutes later, only for the VAR to intervene and assess that Van Dijk had illegally impeded De Gea in the buildup.

It led to widespread debate and conjecture as referee Craig Pawson had initially given the green light, with Van Dijk maintaining sight on the ball throughout and keeping his arms at his side.

It was not to be and on the decision, Van Dijk continued: “I didn’t jump with my hands up [on De Gea]—it’s difficult to say.

“If VAR gives it we just have to accept it and carry on [but] I didn’t think it was a foul.

“But because of everything that has been going on with VAR, it’s a decision where some people give it and some don’t.

“We had plenty more opportunities to score goals and make it a little bit easier. We had two, three, maybe four clear-cut chances but in the end you have to find a way and we did.”

In the end, after a flurry of missed chances from various players, Mohamed Salah would net a stunning goal at the death to see Liverpool move 16 points clear at the top.

And for the first time this season Anfield had a change in tune, with “and now you’re going to believe us, we’re going to win the league” ringing out around all four corners of the ground.

For Van Dijk and Co., however, the job is not yet done having experienced first-hand how the league can throw a spanner in the works at any time, and now all focus is on Wolves.

“I think everyone wants us to say something about [having the league tied up] but we won’t, we won’t get carried away. The squad cannot and we won’t,” he said.

“What we experienced last year is something that made our mentality like this, we just want to go one game at a time, stay fit, try to improve.

“Even after today, what was a well deserved and fantastic win, we have to be ready for the next game.

“We all know how difficult Wolves [will be], their tactics, the players, the manager is fantastic there and what we try to do is just prepare very well, make sure we recover and be 100 percent.

“We expect it to be a very tough game so it makes it easier to prepare. We’re just enjoying the moment and not getting carried away.”